The Other Venice Film Festival is honoring William Attaway as its Featured Artist during all the screenings at Beyond Baroque (October 13-16th) so I thought it was about time I and We got to know a little bit more about the man behind a lot of the art that we see in Venice every day. 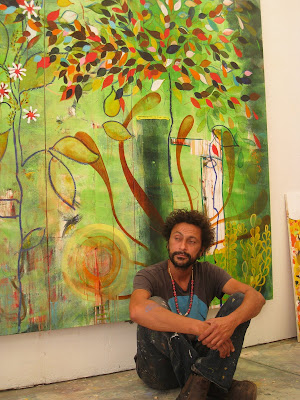 Known around town as simply "Attaway", Attaway is probably best known in these parts for his beautiful mosaic column looking out over The Breakwater (by the beach park for kids next to the Police Station), creating a circle of calm amid the Boardwalk madness. 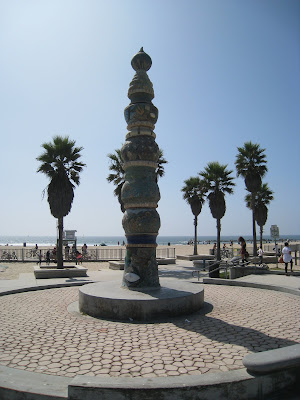 Born in New York to artist parents (and Grandparents - his Grandfather designed the interiors of Radio City Music Hall), Attaway took after them, and was always an artist himself. They were a black and white family and in the early 60's with all the assassinations, it could be a scary time for bi-racial families, so Attaway's family moved to Barbados, where they lived "the simple life" until he was 13. Attaway always loved to draw, and spent many of his days watching men make pottery in kilns built right into the side of Barbados' Chalky Mountain. This was mainly to escape the wrath of a hard core Grandma, but his love of clay was discovered during those long afternoons of observation. 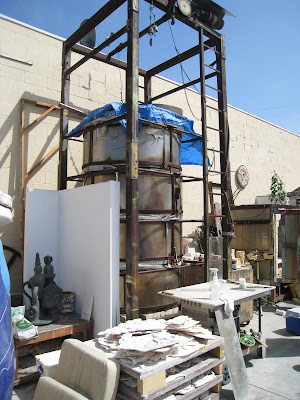 The family re-located to L.A. for his Dad's work, and soon young Attaway was working as a 16 year old assistant to Brian Scheller at a ceramic studio called The Pot Farm (now called the Clayhouse) in Santa Monica. After blowing up the kiln on his first day - literally - Attaway worked extra hard to learn all he could about ceramics. His pots grew bigger and bigger, as "there is no limit to clay".

Attaway came down to Venice a lot to skateboard, and soon decided to drop out of high school (in 10th grade) to go in on an art studio with his friend. His Dad said he could if he really meant it and created a body of work. "So I did." He sold out every community art show he entered, and walked around with a bunch of cash in his pocket as an 18 year old artist. A good time in 80's Venice. 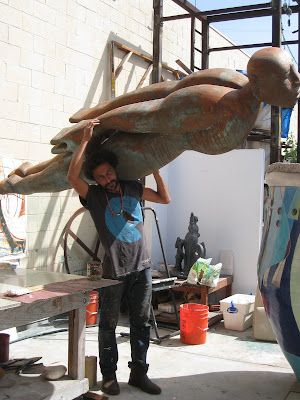 The art continued to expand as Attaway begin to think of his sculptures more architectually, influenced by Gaudi, and he felt the urge to create something that hadn't been done before. When plans for a Venice Arts Mecca school at the beach (where he was going to teach ceramics) fell through, Attaway applied to be the artist to create a work at the site of the former Venice Pavilion. The architect for the area had been looking at Attaway's columns done for the Pomona Metro Station when the news came in that Jerry Garcia had died. The guy had been close to Jerry and was very upset, and took it as a sign that he should give his blessing to Attaway doing the art. There were over 500 applicants, down to 8 finalists, and Attaway walked in to give his presentation right after Robert Graham had given his. But Attaway didn't even have to finish his whole spiel, as they agreed with him right off that, "I knew what should happen here. I grew up here." 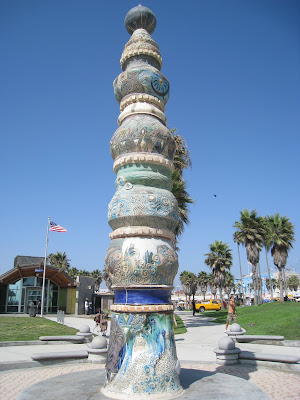 From 1995-2000, with an entire year on physical labor alone, the 25 foot beach column was brought to life. Through the hard work of two people - Attaway and his best friend, Kenny Roberts - 5 tons of clay, 25,000 gallons of cement, and lots of short ribs between them and the Filipino security guard, the column was finished and "It's a dream come true." To have a signature piece of Venice art of his own making in his own backyard, in what his kids now call "Papa's Park", truly is the kind of gratification any artist would aspire to. He does say it was not a pleasure to work with the City Of L.A., and that things really came together in a great example of community over bureaucracy to get the project completed.

That community is the same thing that has kept Attaway in Venice all these years. "There is a love of family here, and a love of art that has kept Abbot Kinney's vision intact. Venice still resonates with that intention." Of course, Attaway has seen the changes we all have, but as he sees it, "Venice was a scary place, you had to watch how you walked, there were major shoot-outs you would not believe right in front of here, crack trucks, gang murders, people were literally giving away their mortgages," so the fact that I didn't even think about all that when I came to see him is actually a really big improvement. 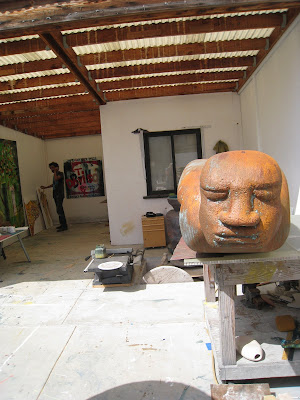 "It's not gentrification that splits us apart, it's War-ification. How our money is spent, what programs get funded ... war over art, greed and instant gratification ... not looking at the big picture ... The more fighting that goes on outside, the more goes on inside." In order to combat that, Attaway feels that people need to stand up and revolt. How can everyday people do that? "People don't know how to wait for their food to grow anymore. You can grow your own food. You can drink lots of water. You can ride bikes and not use cars." 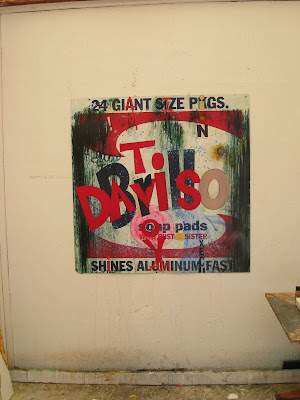 To that end, Attaway's new series of paintings is called "Gardens", and his favorite place to have coffee in Venice is in his own garden. He thinks there should be signs when you enter Venice that say, "When you enter Venice, Bikes have right of way". There should be vacuums in the alleys so you can suck up the glass and stuff so everyone doesn't puncture their tires. There should be naked Police. "Naked Police will stop violence, people would just take one look at them and stop." We talked about Cityhood for Venice, which he's all for and said, "Venice IS the original Hood City, so, yeah. Everyone who goes to Disneyland comes to Venice the next day for free to chill, so we should be getting more than the 1% from the City Of L.A." 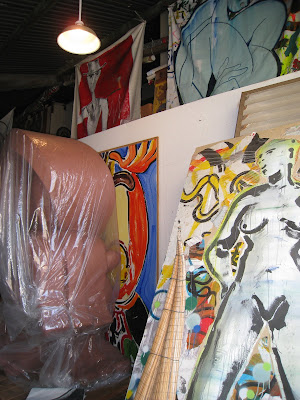 Attaway thinks that Venice is a place "where a lot of people have made their lifestyle dreams come true." From his skating back in the day with Tony Alva, to those skaters having the dream of a skatepark on the beach come true, they MADE that happen. From a mailman who does his route and then goes fishing every night on the pier, he MADE that happen. "Look at the drum circle - I call it the Chaos Circle - The Boardwalk is the end of the Earth. I love it."

You can see Attaway cruising around on his bike. Getting food at the La Isla Bonita taco truck by Gold's Gym that he did mosaics for. Eating at Axe. Or Danny's Deli for matzo ball soup. Or James Beach for chocolate souffle. Or late night octopus and martinis at Hal's ("I want my art hung in Hal's when I grow up"). Drinking at Venice Ale House or Oscar's ("the #1 new hot spot"). 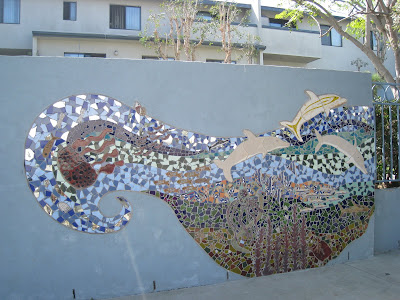 You can see Attaway's art all over town (The Column. Mosaics on beach bathrooms. Mosaic at Tabor Courts VCHC. Etc...Etc..), see art documentaries on him by his friend, Venice local Christopher Gallo, or just go by 334 Sunset on Saturday or Sunday and see if a Flying Man statue is outside. That means you can go in and see his art works in progress. There might be musician friends playing, there might be a chef friend cooking up a feast, and it's unpredictable. "What happens, happens." 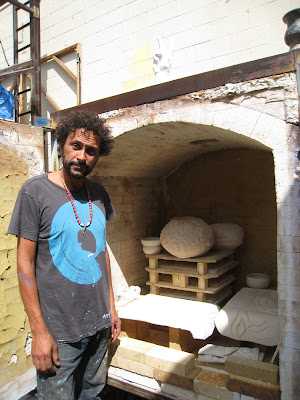 As true a Venice statement as any I've heard.
Posted by CJ Gronner at 7:31 PM