This year's Abbot Kinney Festival started out extra gloomy and misty, one of those lazy Sundays where it's hard to get out of bed. That is, until the bikes started noisily swooping by outside, bright and early, on Venice Boulevard for a Triathalon, that some planners somewhere thought would be a good idea to hold the same day as the Abbot Kinney Festival. Anyway, it got us up. 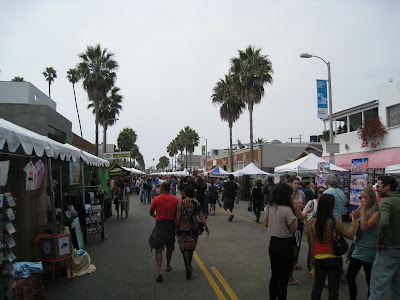 After some stiff coffee to get us ready and jazzed for the day's festivities, it was off to Abbot Kinney. No one in Venice lets a little grey dampen the spirits for our Festival, so the place was already packed by 11 a.m. The booths (amazing jewelry, as ever. Lots of feather stuff too. And always the wings for kids - and some adults) seemed to be doing a brisk business - and they mostly seemed to be actually hand-made, artisan type stuff this year, a vast improvement over some of the junk stands of years past - as I made my way past them all to take my shift at The Free Venice Beachhead booth. 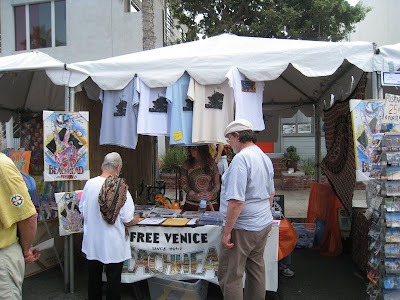 It's always nice to hang out in one spot for a bit at the Festival, to really watch the people and take it all in. It's nice to hear from readers of our only truly local paper, about their concerns, ideas, stories, and drinking in the afternoon commentaries. A few neighbors even offered cocktail delivery services right to the booth ... but then forgot to return with them, sigh. We handed out copies of the latest issue and had fresh t-shirts for sale, with my long asked for design of "DEFEND VENICE" graphic with a guy in a tree with his fist raised. Love it. You should get one. Oh, and you can by contacting the paper at www.freevenice.org. There were also some surveys to fill out that proved to be interesting, with telling results (about topics ranging from where you get your coffee to who you're gonna vote for next year) also in the paper or online.

I served my booth time and then it was off to explore with my gang. I've said it before, but the Abbot Kinney Festival is like Thanksgiving for the whole town of Venice - you see people you may not have seen all year, and it's a big reunion in the street. Plus tens of thousands Thanksgiving orphan tourists that come to hope to see something outrageous, and eat food. And drink beer in the sunshine, that I am happy to report broke through brightly right about midday. 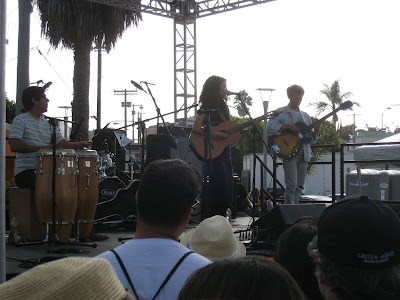 One strange and mystifying thing about this year's Festival was that not ONE of my close friends was playing music at ANY of the stages. THAT is outrageous. It was slim last year, but as far as I could tell this year, there did not seem to be any local VENICE musical acts playing for their friends and neighbors. None. Whomever is in charge of music booking needs to really take that into account in the future because it was the overwhelming and resounding complaint coming from every person I bumped into that day, that WHERE were our local musicians at our local Festival?! I'd say I was really mad about it, but it's hard to be actually mad about anything when everyone's having a good time seeing everyone you like where you live. But still. May I please help book the stages next year? Thanks. 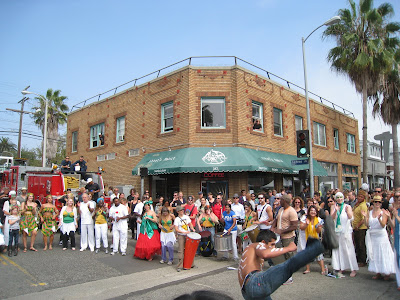 The Abbot Kinney Festival is one of the best people watching events of the planet, and from one end to the other it's an entire smorgasbord of people and stuff to gape at. 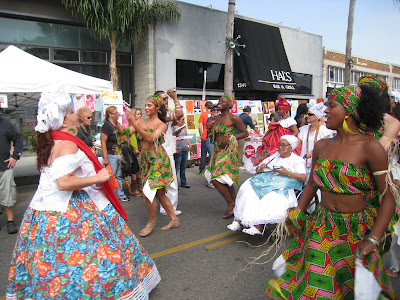 I love it when the Samba School splits the crowd to dance and bang drums among the people walking the street, and everyone stands back to watch and smile and FEEL the spirit of community and fun that pervades that special moment every year. 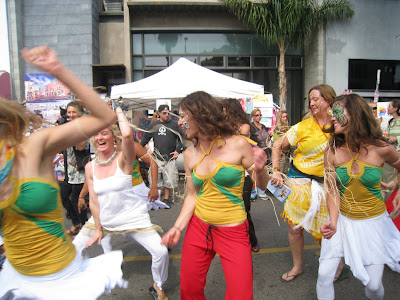 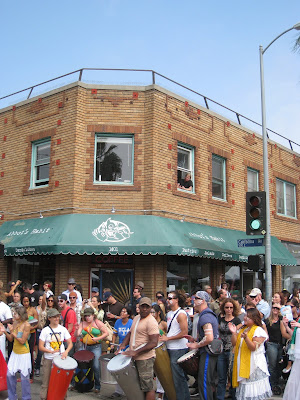 After doing some laps of the street (and having no bands we were absolutely required to see due to friendship or support of our local artists), we went up to our friend's balcony that overlooks the entire hubbub of the Brig beer garden. Again, the greatest people watching ever. 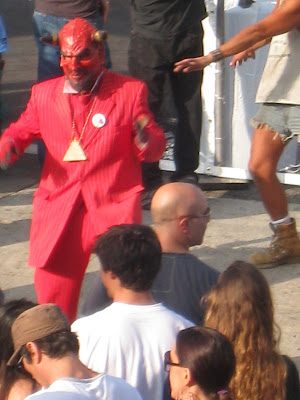 This year there were dueling dancers outside the fence, a big Red Devil carrying a sign ("The Devil Repents!") and a cowboy in short shorts that was FEELING it. 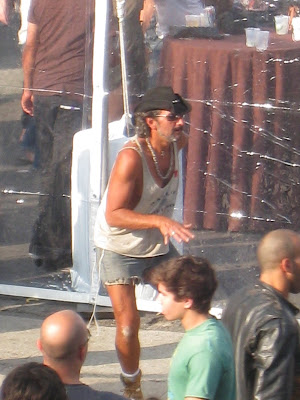 And feeling it. For song after song (from the really good reggae d.j. spinning in the Brig lot). After song. We admired his stamina. And the way more and more (drinking) strangers would step in to dance with him. Good good times. 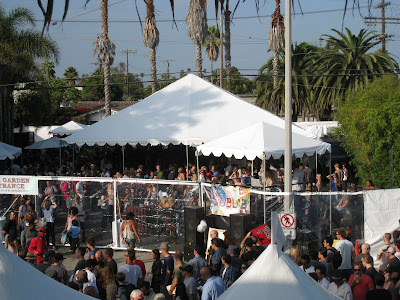 Right around 6 p.m. the fog started to return, the autumn light began its getting darker earlier thing, and that annual mass clearing of the people began at the Venice Boulevard end of Abbot Kinney, heading down toward Main Street. It's amazing to see how quickly it all evaporates, with the whoosh of street cleaners rolling by, the clanking of tent poles falling down, and slurry speech of passersby yelling to each other getting fainter and fainter by the minute. Soon enough it's all over again for the year, and everyone winds up collapsing at someone's nearby pad, re-hashing the day's events and looking ahead to all the good stuff that will go down between now and the re-telling of it to the friends you'll see at next year's jamboree. 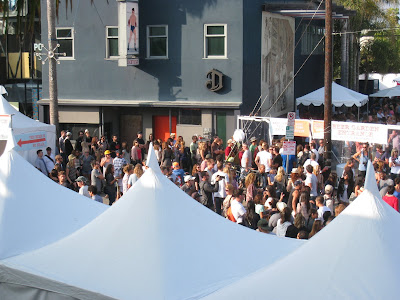