I had just about had it with urban problems this last month. I thought I was actually going crazy from chopper noise that one night that they hovered right over my house for four (plus) hours, just to get some Best Buy robbers (you've got to wonder what the resources wasted for HOURS cost vs. the electronics swiped. Really.). Two days later I went to the beach for some peace and quiet, only to be hovered over by choppers, for again, four hours. I was beginning to think it was me they were after, but I've been pretty good lately.

OVER it, I pedaled for home, and for some reason (likely less noise) I took another route that day. As I sped down Mildred, I burned rubber skidding to a halt, when BEHOLD, right in front of my face was the most glorious, abundant garden with a big cheerful sign reading "Venice Community Garden"! How this had gone on unknown by me (for almost a year!) I don't know, but there it was, bursting with life - and produce. I've been yearning for a simple balcony - anything! - to grow stuff on, so this was like the end of the rainbow for me to chance upon. 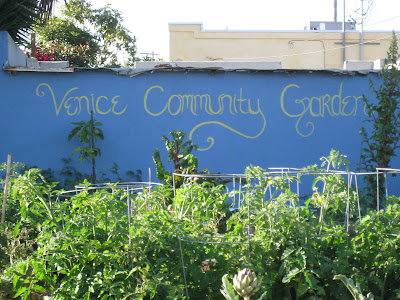 I got online when I got home to track down the story of the place, and a few days later, I was sitting at the sunny patio table in the middle of the VCG, talking with its founder and director, Kip Wood. I have all sorts of garden questions, and he knows what he's talking about, having completed the Master Gardening program. He and his family had a little garden at their Venice home, but builders came and put up yet another square box living complex next door to them, which took away all of their sunlight. You need sun to grow things. Talking about the need for a community garden with friends became Kip walking the streets and really looking for a space.

Kip came upon a "For Rent" sign at the Garden's current site on Mildred, then just a scrubby, overgrown plot of land that had nothing on it. He called the number and reached Donald Novack - the owner of Hal's (my last month's Beachhead subject - synchronicity!), who also owned this plot of land. As the real estate market was/is struggling, Donald agreed to rent the land to Kip and his fellow gardeners at a low cost, as a benefit to the community (and maybe some excess produce to use in the kitchen at Hal's). 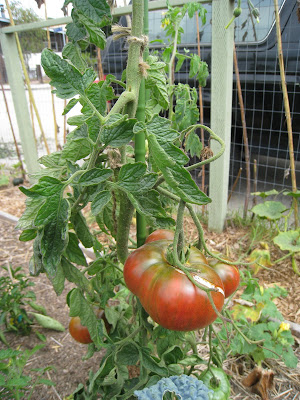 Now they had a site for a Garden, but that was just the beginning. The land needed to be cleared, the soil needed to be tested, gardeners needed to be recruited, and it was on. It seems to be a charmed project, as just when anything has been needed, help has come. The LACC (Los Angeles Conservation Corps) provided land clearing equipment and labor - for free. A Construction company took away all the old dirt and refuse. Venice Youth Build kids came and did volunteer work. All systems were go, but then they found out that the soil had arsenic in it from when Mildred was an old railway line. Not good for growing edibles. 100 tons of undesirable soil was taken out, new soil was put in, and wooden beds were built to elevate the individual plots up off the ground. The word was put out, and pretty much since they've been up and growing, there has been a waiting list for the 54 plots of around 150 names (much to my dismay). 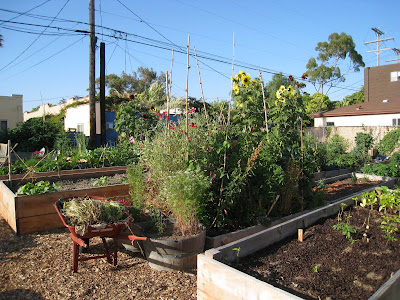 You can see why instantly. It's so completely great to just step inside the fence into this green paradise of growth. As Kip said, "Things just WANT to grow here." We are blessed with a wonderful climate for gardening, and everything just goes bezerk - including weeds, so it's a constant job to stay ahead of it all. "But it's the best kind of work", said Kip. "When I'm trimming plants, my mind is quiet, I'm relaxed, I'm grateful, you just feel good about it." At $25 a month for a plot, with so many fruits (vegetables, herbs, flowers, etc..) of your labor, you can feel good about your grocery store savings too. 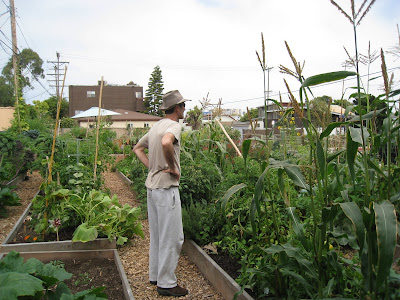 While I was visiting, different gardeners came and went, checking on their crops, watering their plots, picking some FRESH produce for dinner, or even just to stop in and chat at the table. All of them were so clearly thrilled and grateful to have their plot (I get it), they were pretty much beaming as they went about their business. One guy (thanks, Ross!) shared his pineapple mint with us ... PINEAPPLE mint?! I'd never even heard of it. Kip pointed out that benefit to gardening as well, that stores can only carry so many varieties of things, but one look at a seed catalog and it's a whole new gigantic world of possibilities. PAGES of crazy potatoes alone.

The Venice Community Garden really is about Community too. There are fruit trees and herb pots planted for all to share. They have lectures, classes, art, dinners, "Crop Swaps", a Squash Hunt for the kids at Easter time ... all kinds of fun, educational stuff is always going on. We started talking about how everyone's lives would be so much better if we could switch to a barter/trade system vs. capitalist b.s. ... but that's a longer conversation for another day. One lady that was watering her plot while I was there said she was away for a month and had her co-gardening friend send her weekly photos of the plot, as she missed it so. Again, I get it. 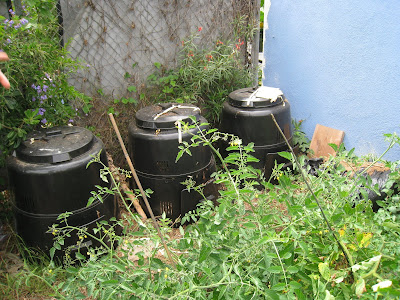 I didn't want to just sit and chat with Kip as his time in the garden was limited, so we talked while I helped him fill up the compost bin things (and learned about them), which goes right back to fertilizing the garden. I got a good old fashioned splinter, and immediately was transported in my mind back to youthful days of helping my Grandma Olson in her majestic garden when I would visit her. Gardening not only made her the tannest Norwegian you'd ever encounter, but made her beloved and kind of famous in LaCrosse, Wisconsin for how very green her thumbs were. I was telling Kip about her, and he stopped me and asked, "Would you say she was happy?" My eyes well up at just the memory of my answer, "Yes. One of the happiest people I've ever known, until her very last day." Kip just nodded, and his point was made. 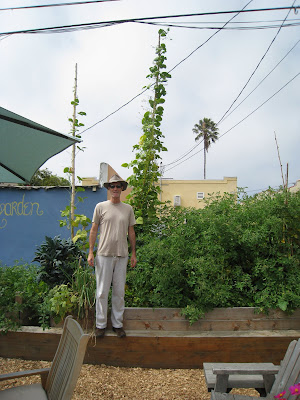 As my day was made. I went home with a bunch of freshly picked beans (from Kip and His Giant Beanstalk), two kinds of mint, and a wish that I'd brought something to carry more home in. But more than that, I went home inspired, impressed, and grateful that Venice has these pockets of magic that make you (almost) forget all about police choppers and such b.s. There was a tangible love of the space, a shared love that when you stop and think about it, should really apply to our Community as a whole. So let's knock off the robbing, the police chasing, the bike stealing, the hating of any ilk, and put those wasted efforts toward things that will grow, thrive, and make us all the better for it.

And if you have or know of any open spaces in Venice that could be donated for a while or forever, that would help the Venice Community Garden expand (or relocate if need be one day). Then I could have a plot and grow things and make you a delicious pie or something in gratitude. Please contact Kip Wood at KipWood23@gmail.com if that sounds good to you.
Posted by CJ Gronner at 9:18 PM