The Leftover Cuties Charm Up The Casa Del Mar

A couple years back I was waiting in a long line at Christmas time at LAX to head home for the holidays. In front of me was a cute couple lugging their stuff along the line. After some time passed, the guy took out a ukulele and started strumming it cheerfully. Now, I have a weakness for the ukulele ever since I had a stint living on the Big Island of Hawai'i in Hilo back in the 20th Century (that remains fun to say). So you can imagine my delight in a dragass airport line to have the charming plinks of the little instrument perk up both my ears and spirits in one second. I introduced myself to them and it turned out the guy plays in a band called Leftover Cuties, whom I had almost just seen (longer story) right before this trip. Random funny life! The whole line was happier as a result of this ukulele and fun couple, Austin and Kate.

So then we were immediately friends for life (they were going to Minnesota too, and that's how we are), and I for sure went to see the band right after the new year, as they are Venice people too! Synchronicity. Again. Great times, every time, these Leftover Cuties bring.

So it was last weekend, that when I did not get my brooding self into the Wiltern (poor planning I'll rue all my days) to see Eddie Vedder play in support of Ukulele Songs (my Summer 2011 Soundtrack favorite thus far), I decided to grab a gang and go hear the ukulele anyway, played with the darling Leftover Cuties just up the bike path at Casa Del Mar. 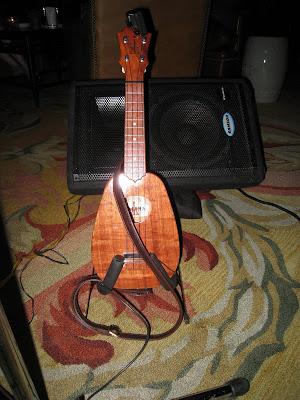 We pedaled along to a gorgeous sunset, locked up the bikes, and walked through the front doors of the swank Casa Del Mar, directly into another, more carefree, era.

As luck would have it, the Cuties were set up by the big fireplace in the timelessly gorgeous hotel lounge, and many patrons were still over looking out the beach side windows at the sunset, so we were able to snag a big leather couch right by the piano - with waitress service. Drinks were ordered, the band returned for their second set, and we settled in for the sounds of lush tunes with a slew of instruments, featuring our small friend, the uke. It all felt extra-civilized, and I felt my freak out stress level of the day shrink by the nano-second. 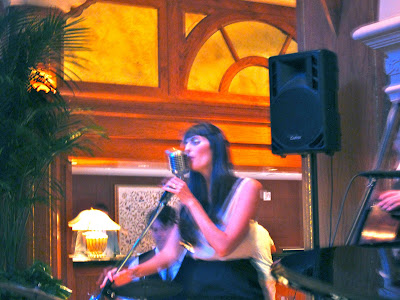 Shirli McAllen is the sultry lead vocalist of the Cuties, and her striking throwback looks and Billie Holiday-like voice (and I would never say that lightly) in front of that old school microphone make you sit up and listen from the start. She is backed up by Austin Nicholsen (my airport friend) on that ukulele and vocals; Mike Bolger transporting you back in time on horns (muted trumpet stand up solo at the piano rules), piano and accordion; Ryan Feves on upright bass; and normally Stuart Johnson on drums, but he's off touring with Tim Robbins right now.

The Leftover Cuties have a sublime new album out, Places To Go, and played a good mix of their own tunes from that, as well as golden oldie standards (plus a Lady Gaga "Pokerface" cover to boot!), so that anyone in the very diverse tourist/local/foreign/young/old/casual beach/dressy hotel crowd would have something to snap their fingers along too.

From their own "Sometimes", "Everything I Got", and my personal favorite "Sunnyside" (so cheerful you are simply forced to get a spring in your step), to classics like "At Last", "Georgia On My Mind", and "All Of Me", they all blended together so well that the untrained ear would think they were all standards, so well written and executed are their originals. You can't say that very often these days, I tell you. One older gentleman was doing an abstract hula at the edge of the crowd, so into it and feeling fine was he. It was a treat to watch someone be so free, especially in a posh hotel scene. He inspired others too, as at one point (old time-y version of "Pokerface") the entire see/be seen audience was clapping along. In a hotel bar in L.A.! So excellent. 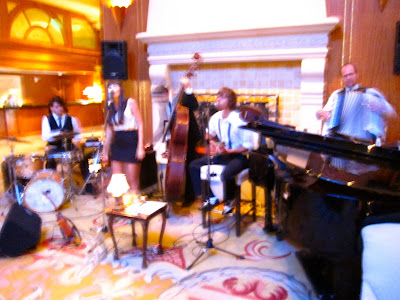 It got torch song dark for a moment when they did a DARK version of "You Are My Sunshine", during which I whispered to my friend, "DARK You Are My Sunshine? That's punk rock." That one featured the muted trumpet solo by Mr. Bolger, as well as a turn on the Freedom (ok, French) Horn. I noticed they had a bunch of fans that really sang along, and learned that the Cuties have their song "Game Of Life" featured as the theme song to the Showtime show, The Big C. During a break an older woman gushed up to Austin to tell him that that was HER jam, and she just loved them, and what a great song, and on and on and awesome. 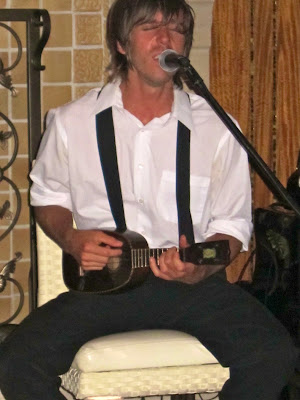 That's the feelings they invoke when they play though, and how great is that? I glanced around the room at one point and absolutely everyone in the place was just smiling and toe-tapping along - at least. So it was perfectly apt for them to close that set with the almost over the top happy dance-along "When You're Smiling". This one girl was up and dancing so profusely in front of her refusing to budge boyfriend that you had to laugh. But once she stopped trying to get him to join her, she let go and danced freely, just like the gray haired guy across the room. Everyone watching and listening smiled with her, sharing the same sense of fun and "Man, what a good time" as we all applauded together at song's end. At least that was my groove on it, and I started out the night feeling aggro, remember, so I'm a pretty good barometer.

Trust me on this, if you for sure want to charm the socks off anyone at all ... date, out of town friend visiting, Grandma ... take them (preferably by bike) to see The Leftover Cuties Friday nights at Casa del Mar. With the Santa Monica Pier flashing right outside, waves crashing, it's all just great. You will give them a truly gorgeous memory, whoever they are. But see them whenever they play, because it's always a genuine delight.

Now the last splashes of color in the sky had given up their spotlight to the Leftover Cuties, and the room had heavily tilted back over to the fireplace side. We went and said our hellos, got our new cd's, and headed back out into the indigo night air to cycle our way back down the path.