We've been blessed with some real lovely days recently, like patience rewarded. It's been almost a week since it last rained, and glorious ever since. Except for the loads of trash on the beach. It is enough to make you want to grab the entire city by the lapels and scream in their face "THROW GARBAGE IN GARBAGE CANS, YOU FILTHY BEASTS!!! IT ALL WASHES INTO THE OCEAN AND YOU ARE KILLING US ALL!!!" or some such subtle thing.

A week later, and you'll notice the long row of stuffed giant industrial sized trash bags lining the shore this morning (and STILL there is more work to do!): 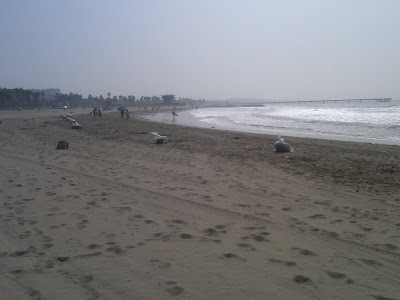 Because thank GOODNESS that there are people out there that actually DO care about our planet (or have Community Service - either way, THANKS!), and get up early to go pick up after the slobs that don't get it. Yeah, you. Go walk two feet across the sand and throw your junk food bag away in the trash before we seriously turn into a WALL-E type place. That would make me very unhappy. The dolphins leaping out of the water this morning looked very happy, by some miraculous ability to overlook our reckless pollution of their home.

The sea talks to you, if you listen. I was having a mild panic attack about all the litter (obviously) and stuff, and needing some kind of sign that things will be alright, and Jenny said, "We're going to see dolphins". Before the echo of her "s" died out, two arcing dolphins leaped out of a perfect wave, truly that very second. Ask Jenny - she is my witness.

Then a ways down the beach I returned back into the zone of deep thoughts about appreciation and doom, and other conflicting emotions, when a giant wave came out of nowhere and SMACKED me back into being here now, and loving it. Along with that smack, from straight out of the late '80's or early 90's, En Vogue's badass tune, "Free Your Mind" (" ... and the rest will follow ...!") burst into my brain, and I took both the advice, and the reminder from the sea, to heart.

And while you're at it, throw away your garbage in the proper receptacle. Mahalo.
Posted by CJ Gronner at 3:24 PM