I've been going to the Venice restaurants of James Evans and Danny Samakow for years ... James Beach, Canal Club, and Danny's Venice Deli ... and have enjoyed every minute of every time. Exchanging kisses and small talk over the years is great, but it was high time I explored the background of these Venice institutions a bit deeper. Up first, Danny's Venice Deli. 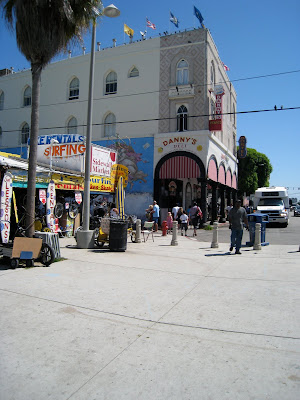 Danny Samakow grew up in Pittsburgh, but it wasn't long before he was off raising a ruckus with political demonstrations and anti-war protests as a Yippie Minister of Propaganda ("I"ll tell you my favorite riot ...") in Madison, Wisconsin during Viet Nam. From there, it was time to Go West, Young Man, and he went to Cal Arts to study Happenings and Environments (What a cool major). He was a painter, loved to organize fun events, was always very interested in his community and politics, and supported local artists ... all of which play a big part in owning a restaurant/s, he would soon find.

Backing up a second, Danny was living, painting, and running a cosmetics business out of his garage in a house right next to the West Beach Cafe (now James Beach) that is now the parking ramp. In 1982, James Evans came down from San Francisco to celebrate his birthday with a friend at the West Beach Cafe. That's where Danny and James met, and it wasn't long before they were inseparable, and James moved down to Venice. He was working as both everyone's favorite waiter, and then G.M., of 72 Market Street (now Nikki''s), when it wasn't doing so well and was going to close. Between Danny (who has keen artistic and business sides to his personality) and James, they turned that place around into a profitable joint in no time flat. Which led them to think ... Hmmm ... what about our own place?

It was then that the West Beach Cafe came up for sale. Boom! They would take over the very spot they met in! (In fact, the very bar stools where they met are still sat on there today). James Beach opened in 1996 ... then Canal Club ... then Danny's Venice Deli in 2005. The vision for Danny's was all about preserving Venice history, and creating a modern history to go along with it. When creating the vibe for his namesake restaurant, Danny knew he wanted it to be a gathering place that would bring together the spirit and bustle of the world famous Boardwalk and its history, with the local people who live (and eat and drink) here. To that end, he got artist Allan Kaprow to do caricatures of local Venice characters. He got Rip Cronk to do a 40 foot mural on the back wall featuring Venice legends, past and present. He worked with the Venice Historical Society to get old photos of the Abbot Kinney heyday. He traded food for art with Venice artists like Ruscha ("Thanks For Being With Us"), Hopper and Graham. He found the last original gondola bought by Abbot Kinney from the Venice Pavilion at the 1900 World's Fair, and went around and around with the city permit people to get that one ton thing securely hung from the ceiling by the bar. We were all enjoying Happy Hour there the other day after the Venice Eco-Fest, when Danny told a wonderful story about that gondola that I think illustrates the history and the special qualities of this place, as Danny said as preface to the tale, "Listen, there IS magic in the world!"

The bow piece of the gondola hanging in Danny's had been missing for decades, and no one had any idea where it was, or if it even existed anymore. On the very evening of the lighting of the VENICE sign hanging across Windward & Pacific in 2007, Danny was running around like a lunatic, as he'd been very active in actually getting that sign up in the first place. (In fact, he was the guy that pushed the button to light the sign!). Well, they were running low on cups for the celebration after the sign lighting, and Danny went down to the basement of James Beach to see if he could locate any more cups. While digging around, he saw a hunk of wood sticking out a little, wedged in by the furnace stuff. He pulled it out, and lo and behold, it was the long-missing bow of the gondola! Found on the night of the Venice sign lighting! Danny took it as a blessing from Abbot Kinney himself that they were doing the right thing for their community, and bow and boat were reunited back at Danny's Deli. As Danny is saying here, "On my life", about the veracity of the story... 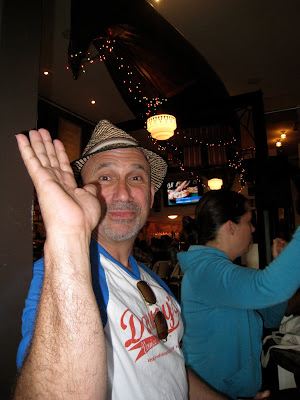 That lovely tale goes along with Danny's philosophy that Danny's Deli would and should be about facilitating the history of Venice, as Venice is a "Magic Nexus". It's not that it's the best beach in the world, or the nicest, it's about the Spirit of the place, and that's what they're trying to capture there ... and they're doing a fine job of it. There is never attitude, no velvet rope line outside type stuff, and there's always a warm welcome. They emphasize connection, both as a local base of operations for locals, and a place for tourists to connect to our real community.

They do that by hosting local Chamber meetings (like the upcoming Art Crawl bunch), providing a place to watch the World Cup recently, promoting local artists and musicians (like Suzy Williams' regular gig there), and providing good quality food and drink at affordable cost. Danny said, "Life should be good, and abundant ... life's been good to us, so we want to pass that on, with big pours and good prices ... which is also a political statement. Venice is a seed that we need to germinate and spread .. we have our community because we believe in it ... it's a living, breathing reality". I could go on quoting Danny all day, such a positive and profound fellow he is.

One of the things I like most about Danny is that when he thinks things, he ACTS on them ("I had a dream about mini corn dogs for $4.00, so here they are!"). Like getting that Venice sign up and lit ("We took over the streets that night, and the police just let us. It was one of the most magical moments of my life ..."). That's just the kind of person that Abbot Kinney WOULD bless with success, someone who acts as a faithful steward of the whimsy and history of this crazy, unlikely FEELING of a place, that we're all participants in creating.

There are still blank places waiting to be filled, both on the walls of Danny's Venice Deli, and in the days to come in Venice. Stop in and have a drink, some good down home food (your place for Matzo ball soup in Venice!), and soak up a little local history and flavor while you're at it. Like Danny says, "You find yourself at the beach". Especially in Venice.