I hope you were lucky enough in your life to have crossed paths with our friend Mark "Sponto" Kornfeld, founder/owner of the Sponto Gallery in Venice. He was a true character, by and for Venice, all the way. We had the greatest of times in that space at 7 Dudley, and things just haven't been the same since our Sponti's death at the end of December in 2008. 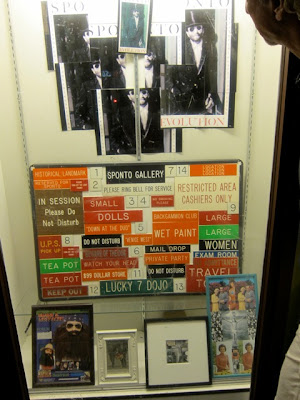 That's why I was so happy to hear that the guys at Artisan Venice (Darren Hall and Steven Avila) were going to hold a "Sponto Evolution Event" at their corner of Windward and Pacific last Saturday night, to carry on the Spontification Ritual, with the spirit behind all the openings (Everybody WELCOME!) and parties we had at Sponto's almost fully intact. Sponto himself was about the only element missing ... and even he was probably there, hovering above, grinning like the Cheshire Cat in the swirling smoke. 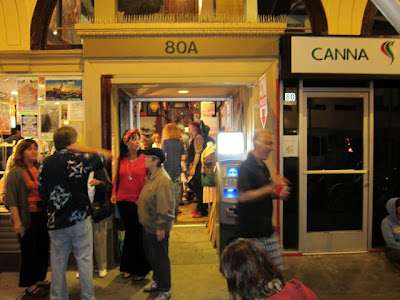 There was live music by a bunch of little groups (so sorry, I didn't catch the names of the troubadours - Spontified - except for Suzy Williams was with one punchy little bunch, that was like jazzy Renaissance people. 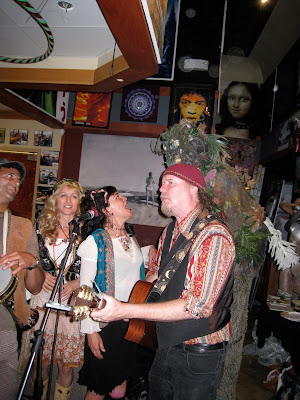 A whole gang of us from the real Sponto Gallery days were there, pouring out some of our juice on the ground in front for Sponti. He curated a lot of art shows in his day, but more than anything, he curated FUN. I have so many quotes from him over the years, I'm going to have to do a whole story just about him soon, but I know he would have been cracking us up with his quips about the night, and all the fuss still being made over him. Which he would have adored, by the way. 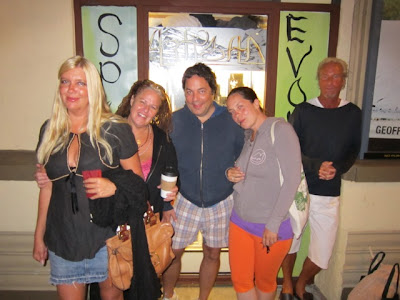 The Tree Man was there (who we first met at Sponto's memorial service on the sand). They handed out 8 X 10 photos of Sponto in his prime. Sponto's great friend, Gerry Fialka, helped to organize this night at this space with the Artisan fellows, so it definitely had the core blessing needed to put on something in Sponto's name. 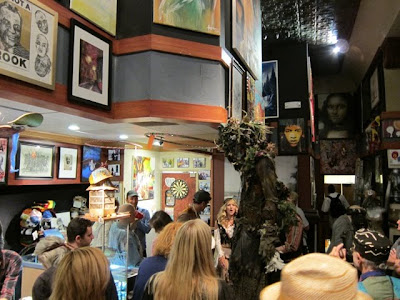 I commend Artisan, Darren, and Steve, for showing the reverence to someone who was so crucial to Venice as Sponto was, and also for keeping it REAL down there at their store. Art by LOCALS (most often being created right there in front of you, like it was again on Saturday night). Making every single person feel welcome, whether you lived on the street or in a big fat loft. Even streaming the event live, so that people who might not have been in Venice on this perfect July night, would also get to get a glimpse of how we do it. Sponto style. 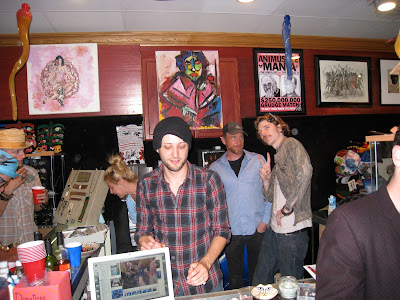 I remember one time Sponto said, "My healer passed away ... Man, that sucked". I know what he meant, because he was our healer in a way. But nights like Saturday at Artisan Venice made it suck a little less, because the feeling of Spontification was intact. With all of us sharing stories, partying up so it spilled out the door and onto the sidewalks and streets of Venice, creating that fun and merriment in his name, and passing it on down to new generations ... Sponto lives on. 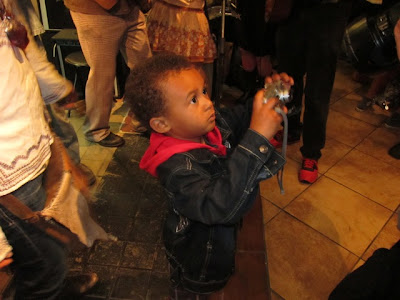 *Photos by Jennifer Everhart and me.
Posted by CJ Gronner at 4:30 PM