You've probably seen Kwaku Alston all around town ... and always with his camera. He is an extraordinary photographer, and just had his stellar opening reception for his new works, Horizon Court, last Friday night at his gallery on Abbot Kinney.

We're pals, but we sat down on Thursday - amid all his preparation madness for his show - to dig deeper into his origins as an artist. He grew up in D.C. and Philadelphia, and began his interest in photography at the age of 13. His first camera was a Polaroid, and he liked the instant gratification that sweet camera (that we all miss) gave him, and it was then that he began to fall in love with the process of capturing images. He was always an artist, whether it was painting, illustration or taking pictures, so that led him to enroll at the Rochester Institute of Technology in New York to continue his photography education.

That led him to New York City, where once he started working, it has never stopped. His first client was The New York Times Magazine, which led to assignments for The New Yorker, Time Out, The Village Voice ... a lot of assignments, and a lot of running around.

In the 90's it became a lot more about music, and Kwaku got gigs doing album cover shoots for a whole bunch of artists, like Missy Elliot, Wyclef, Santana, etc ... and then the real celebrity culture stuff started in (and we still haven't been able to shake it), and work started bringing Kwaku out to Los Angeles a lot more. Ultimately, he knew he needed to move to the West Coast to expand his business, and there was no other choice for him than to live in Venice. Once settled in L.A., it became all about shooting celeb magazine covers and articles (GQ, Vanity Fair, People, etc..) and movie posters, all the show biz kind of action, and Kwaku quickly became a go-to photographer if you wanted an absolutely gorgeous portrait style photo of the days' celeb du jour.

The 2000's brought work that started to feel more like advertising, the work more fleeting, and there was far less attachment to it for Kwaku. That began making him question himself as to what he was doing, and why. The age old artist's struggle between art and commerce really began to affect him, and he remembered hearing that Helmet Newton said that the best images are made less than two miles from your house. Living in colorful, crazy Venice Beach, Kwaku knew that Mr. Newton was probably on to something there. So began his Venice Project. 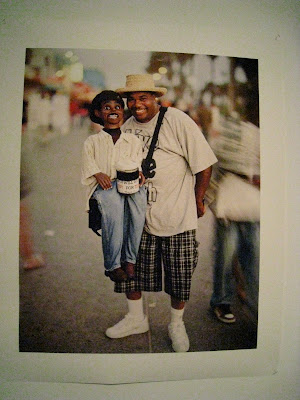 Inspired by photography greats like Diane Arbus, Joel Sternfeld, Alec Soth, and Bruce Davidson, Kwaku set out to get close to his subjects, in terms of proximity, but also in trust. If you see people around all the time and know them, he figured, you're much more apt to get an image that has depth and meaning. So he set out with his large format camera, and did street photography, or sometimes chose subjects and brought them back to shoot in his studio, generally shooting the things that really meant Venice to him. First came the Venice (at large) series, then the Volkslivin series of VW buses. Then the one that we just celebrated last weekend, called Horizon Court.

Kwaku temporarily moved into a place on Horizon Court last Summer, right off Speedway. He went out and constantly shot the denizens of that Boardwalk-adjacent neighborhood, and every last image simply oozes Venice. I went and looked at the works before the opening, and immediately understood what Kwaku meant when he said that this series of images are "Aspirational" photos. For example, the one of the punk rock couple from Seattle ... hard edged as they appear, there is something within them that they want to shine. Tons of angst, but it seems like there is still hope in their eyes (especially the boy). Or the guy that's always down there in his tiny bathing suit flexing his muscles and rolling around metal balls ... that guy aspires to something, even if it's just blushing tourist Moms getting their photo taken with him and forking over a buck or two. The quiet looking kid with his guitar, making you wonder what his music sounds like. The ventriloquist and his dummy, doing their schtick out there every day, a Venice Beach Star to the huddle of people that may - or may not - gather around. Each of these photographs are done with the same beauty and respect that Kwaku shoots our First Family with. (Yes, he's shot the Obamas multiple times ... THAT is the kind of talent we're talking about here, People.) 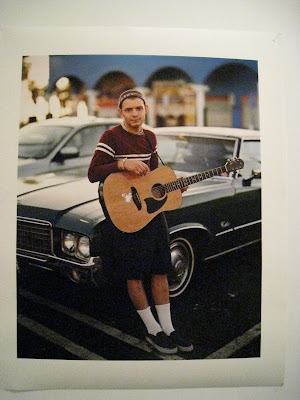 The opening was a blast, packed with Venetians appreciating the work that came right out from under them. Kwaku has a bunch of other ideas up his sleeve for new chapters of what will ultimately be a Venice book - though each chapter could be a book unto itself. They are also a serious time capsule, as over the years, his documentation of Venice has captured the before/after of the gentrification, the changes in architecture (photos of an old beach bungalow which is now a big, new, modern architectural gem) and also the people ... from Old Venice to the New Hipsters. 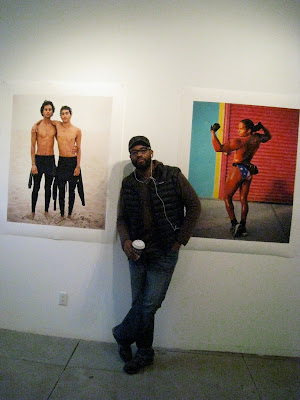 Ah, Venice ... Kwaku loves living near the water, and the eclectic art vibe of the place, as well as the friendships that grow over time, though as he said, it does take a while to earn your place in the community. We talked about the places we love most, for sure agreeing on Gjelina ("Travis Lett is a good person, and his artistry is food" - Kwaku). He loves Seed ("Get the yucca fries, and the Southwestern Burger is the best burger in Venice."), Hal's, Jin Patisserie, Wabi Sabi, and splits his coffee time between Intelligentsia and Abbot's Habit - but not on the weekends, when as he cracked me up with, "The Bridge and Tunnel crowd take over." As for most of us, it's very important to Kwaku to support the local businesses.

Regarding Art in Venice ... "The allure, the mystic, the MYTH of art in Venice still exists, but artists today can afford less and less. So called 'Artist Lofts' that start at $850k are unattainable and illusionary for even successfully working artists. There needs to be special, dedicated lofts for affordable Artist's housing". THAT is something we can all agree on, I'm sure. 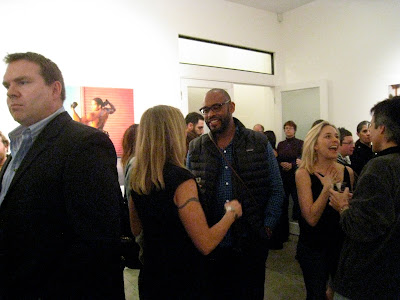 So we celebrated all of this, and more, with a mass of neighbors and colleagues, at the Horizon Court opening ... and I think realized - to a person - that art exists among us every single day. You just have to open your eyes to it. Thanks to Kwaku for being out there doing this for us, again, every single day.
Posted by CJ Gronner at 11:57 AM