I first became friends with Matt Ellis when I heard him playing his songs at The Habit, the much-missed Friday jam my brother, Paul, started at Abbot's Habit a few years back. I was impressed, and immediately went over and befriended him. That seems to be the way it goes with Matt, as last night The Stronghold was PACKED with friends for the digital release of Matt's new album, Births, Deaths & Marriages ... and we were all impressed.

Matt and his darling wife, Vavine, created an entire event around the release, complete with Hit+Run screen printing Matt t-shirt's of your choice right in front of you, a photo booth with props relating to birth (baby doll), marriage (bouquet, top hat) but no death - though someone did volunteer to zoom out and find a gun in the neighborhood. They had Matt's favorite Australian beer, Coopers, as a sponsor, and that helped get the party started off in a rowdy fashion. Giant burlap tapestries announced the album title, and lanterns were strung all over. The Stronghold has never looked better, and should keep the idea of moving the big couches back so that people can be up and dancing all over - which we were. 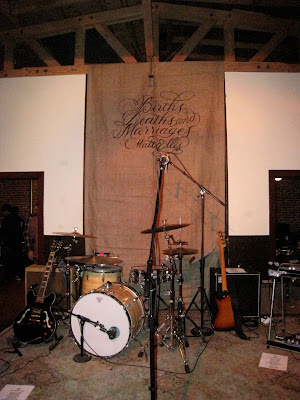 The music of the night started out with Will Courtney, a bearded troubadour (formerly of The Brothers and Sisters out of Austin) who reminds me a bit of Neil Young, sound-wise. The bad news was that many of the friends gathering hadn't seen each other in a while, so the catching up chatter at times kind of overwhelmed Will's on the quiet side acoustic songs. I'm going to need to re-visit his stuff, because I was into it (in between constant hugs and greetings).

The room was full to capacity when Matt took the stage with his band mates; Josh Norton on guitar, Simon Smith on bass, Marco Meneghin on drums, Tim Walker on pedal steel guitar and Stuart Cole (from Edward Sharpe and The Magnetic Zeros) on trumpet. People were already whistling and hollering before they even began, and it only increased when they opened with "Heart Of Mine" off the brand new album. There is a spirit of the open road flavoring the new songs, and it recalls the desert rock of Calexico at times, which makes sense as some musicians from that great band play on the album, and it was mixed at their spot, Wave Lab, in Tuscon, Arizona. All the good people in attendance were to have the digital copy in their in-boxes before they woke up today! (Hard copies coming in March. Expect another shindig.) 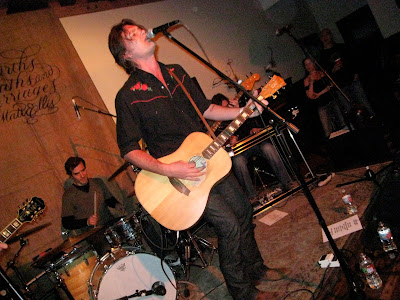 After thanking The Stronghold and the various sponsors, Matt asked "Is there a Mrs. Ellis in the house?" and Vavine took the stage to join Matt on their duet, "River Too Wide". Looking fantastic in a pink fluffy dress, and looking lovingly at her husband the entire while, the Sometime Songbird (Vav) made their love tangible for the entire room to see. It's also a toe-tapper, and got the house swaying, and that didn't stop from thereon out.

I spoke to Matt earlier in the day while setting up the place, and asked about the origins of the album's title, and the content itself. He said that all these events were happening (births, deaths, and marriages) during the songwriting process, and that you reach a certain age and realize that those are the very things that make the world go around. Each song has something to reflect on it all, and the title track, "Births, Deaths & Marriages" starts out with the line, "Will they even know my name?", and it's clear that he's been thinking about the babies born to friends all the way back home in Australia, and really feeling the distance ... "Missing you, back home." Again, though the tempo is way up, the tenor is rife with truth and feeling.

Next up was "Don't Let Me Forget" and featured the trumpet wail of Stuart Cole, lending it more of that Calexico-style patina and majesty. It conjured up a ton of emotion to where our friend Nathan said, "It's gonna be alright!", cracking up all of us within earshot. Love it. "So Many Lied" calls out political liars, and Fox News types (one in the same, really) within the confines of a rocker of a tune - just the way I like my truths told. "So Much To Live For" was lovely and reflective, and timely, considering we'd all just heard about the suicide death (Births, Deaths, Marriages again!) of Boner from Growing Pains, another Venice resident. Looking around the room, the friendships and unconditional love coursing about made one think that's ALL there is to live for, and we have it in abundance. And so we celebrated that ... all night long. 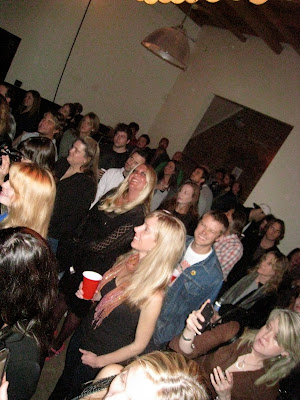 "Too Late To Call" carried on that Tuscon vibe, with serious weight to it. "Trying To Believe" is a party tune that had Stuart back on the trumpet, and the entire room dancing and singing along the "doo Doo DOO YEAH!" chorus. The party was ON, and too soon it was time for the last song of the regular set, "Won't Let This Die". This one is very special to us, as we are a group of friends that is really like family. We've supported each other, traveled overseas together, laughed, cried, and loved through it all. "The Boys" - Matt, Paulie, Joey and Scotty, are celebrated in this sweet Bromance of a song, where the verses talk about the meaning of Matt's friendship with each. All of them had been busting ass all day to help get The Stronghold ready for the show, and to hear this serenade of deep and lasting friendship sung by Matt with all the boys singing along down front, almost made me choke up, in spite of the rocking fun of it all. 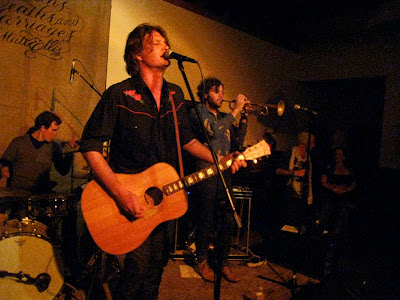 Wild shouts and screams filled the by now boiling hot space, and Matt came back up with the band to reward us with an encore. He had Vavine join him again, and they treated us to the song they sang at their own wedding in Australia, "When I'm Without You". It is sublime, and an absolute tribute to their long-time love. Vav got extra hoots and hollers for the high note, and rightly so. Again ... lump in the throat. 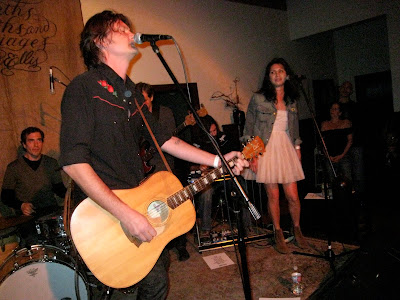 Which soon cleared and was replaced by our singing along with Matt and Vav's cover of Iggy Pop's "Candy", one of my all-time faves. It's a perfect duet for M&V, and the crowd l.o.v.e.d. it. "Life is crazy ...." Isn't it though?

The finale for Matt's set was the party anthem with a stern message, "Hey, Mister" from Matt's excellent last album, Tell The People. It goes off ... and had a little help from Paulie and Scotty on backup vocals too. The whole place was smiling, sweating and singing along, and as the cheers rang out at song's end, I had a flashback to the beautiful farm, Stump Jump, in Australia where Mr. and Mrs. Ellis were married. I had the rare honor and delight of being asked to speak at the wedding on behalf of the American contingent, and at the end of my speech to all our newly made friends down there who love and miss their Matt & V, I told them that I wanted them to know that as many of them that sat before me celebrating their love, there were just as many back in Venice that would've loved to be there. On this special night celebrating music, friendship, and love ... I felt the reverse, and just as powerfully. I knew that as many people that were shouting their love and support for Matt and V last night at The Stronghold, just as many back in Oz were wishing they were there.

You find out over time that you can feel Home in more than one place. Surely Australia is home for Matt and V, but so is Venice now. Venice came onto Matt's radar as a young lad because of skateboarding ... which soon led to him hearing about the music and artists that lived and created here. He came out to try living here when he wanted to make a big move on behalf of his music, and soon Vavine followed. They are now part of our family - for life - and the absolute Community of Venice. Matt wrote most of the songs for Births, Deaths and Marriages in his backyard garden in Venice. The beach, people, bike riding, burgers at Hinano's, coffee at Groundworks on Rose, drinks at The Townhouse, parties, dinners, holidays, drinking nights, trials and joys of our circle of friends all color the final product, directly or indirectly.

Music. Art. Community. Friends. Love. All of this made for a throw-down of an evening to celebrate it all. After a blistering set of Roots Rock (!) by the inimitable Restavrant - whom we also ADORE - and a ton more Cooper's, all there was left to do was rejoice ... and enjoy how lucky we are to be a part of such a talented, creative, kind, loving and FUN Family of Friends here in Venice, California.

Births. Deaths. Marriages. And I would add ... Nights like these.

*Matt Ellis can next be seen at the Troubadour on March 15, and at the SXSW Little Radio party right after that.
Posted by CJ Gronner at 2:23 PM