Oh, 2020. You've really been something else. This holiday season will be like none other ever, and we're all having to get creative to keep it special and magical. One of the beloved newer traditions in Minneapolis is the Gingerbread Wonderland show held each year at Norway House, and this year's production was truly outstanding ... until it had to close down for another Covid lockdown. I feel really bad that there are so many wonderful gingerbread creations that are now stuck inside with no one to appreciate them, so I thought I'd share some of my favorites here in an attempt to spread some Christmas cheer ... starting with the sheer marvel by Maggie Karschnia MVP most crowd pleaser in the bunch before the doors had to be shut - Holidays at Hogwar's! WHAT?!?! That's pepperkake?! Incredible, truly. 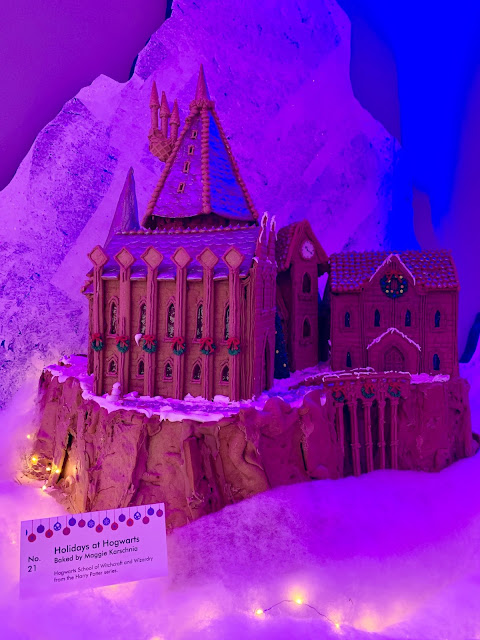 There are so many gingerbread houses in the gallery that it smells like gingerbread is currently baking, but it's just the sheer volume of cake in there! 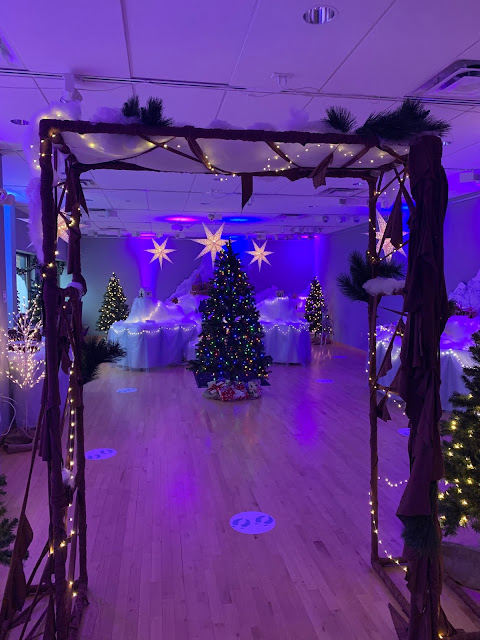 The blue facade of Norway House greets you as the first gingerbread house, and it only gets better from there. 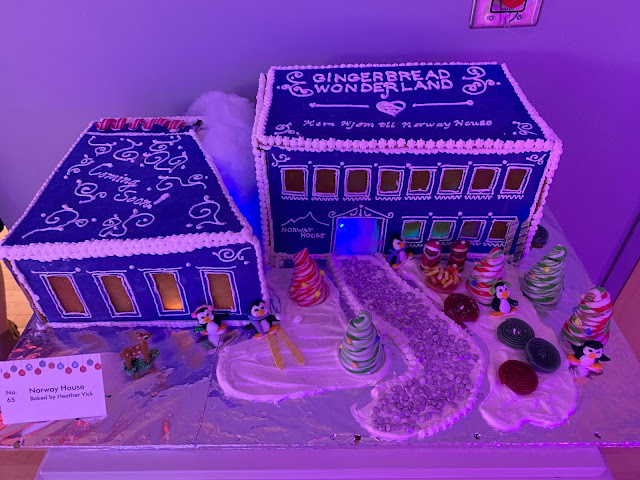 It's kind of hard to shoot photos in the gallery because it's dark and there's black light going on, which makes it all rather enchanting in person, but tough to capture. This delightful carousel by Renee and Kirsten Poppenhagen (great name!) was very impressive because it really rotated. Pretty awesome. 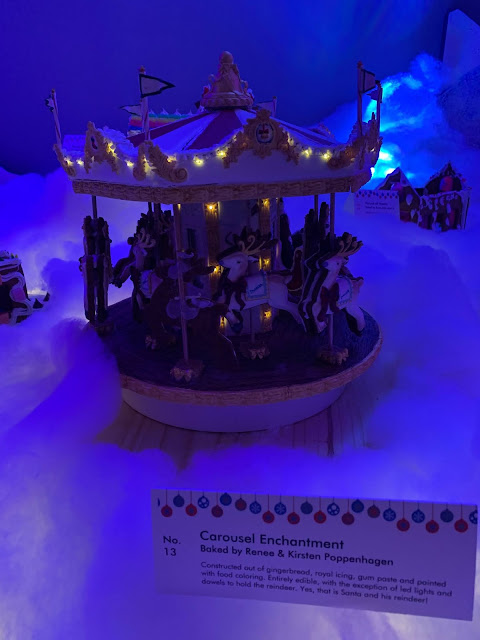 I can't believe I STILL haven't been to Norway, being 100% Norwegian, but here we are. The Munch Museum has always been on my sights to see in Oslo, and the Norway House has it depicted in gingerbread. Takk! 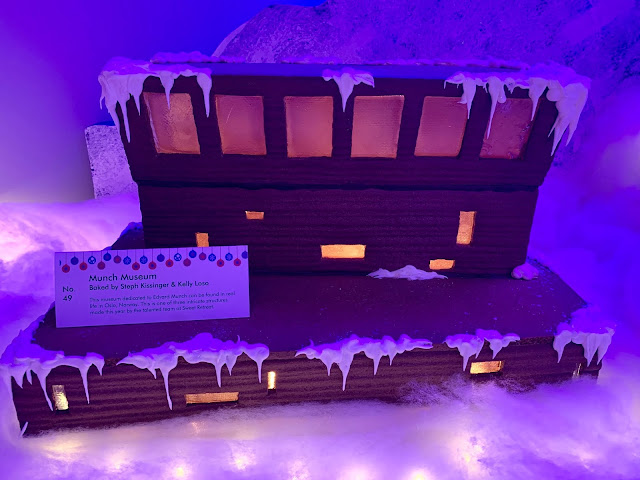 Even the very traditional gingerbread homes were impressive, and made you want to actually live inside of them. Like this one ... 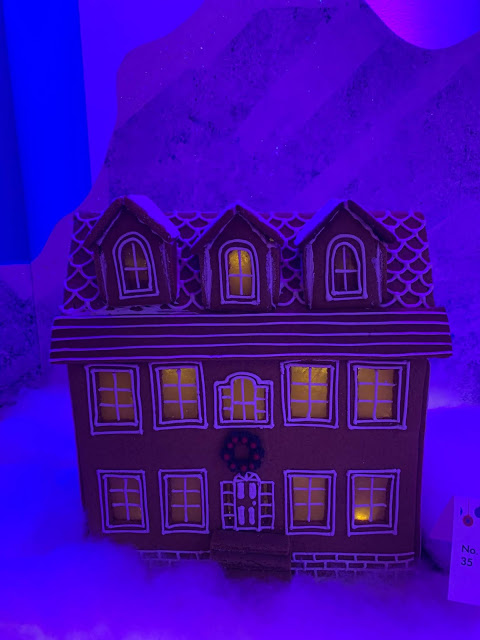 Bakers tend to create places that are either Norwegian or local Minnesota places is they're not doing the traditional gingerbread vibe, and it's always fun to see someone's interpretation of a local landmark. The Witch's Hat by Paula Gilbertson was one such cool one, and I learned that it had been designed by a Norwegian architect, Fredrick William Cappelen. Who knew? 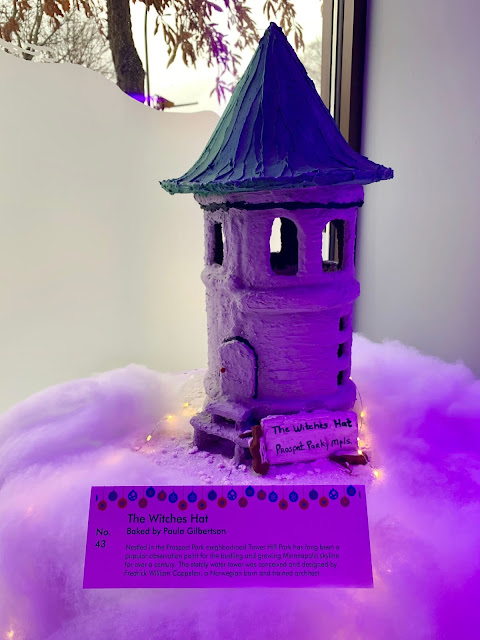 There's no place like Gnome, and those popular little guys populate the adorable house done by Pati Kachel from my own Mom's Daughters of Norway Pauline Fjelde Lodge #51 in Minneapolis! Great job, Pati! Skol! 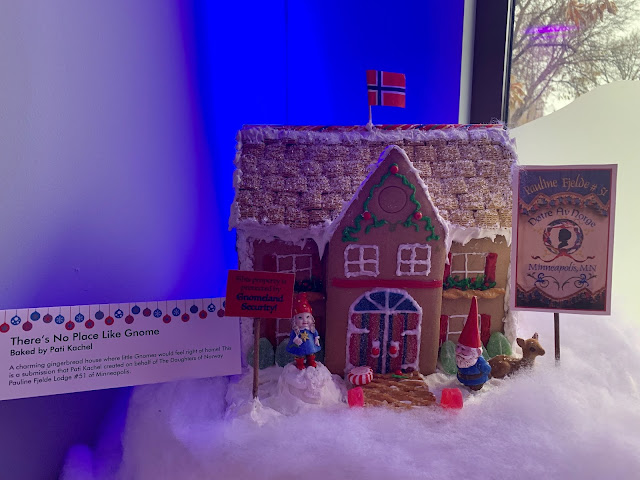 The downtown Minneapolis Milwaukee Road train depot is there in gingerbread, looking an awful lot like the real place - only maybe better. 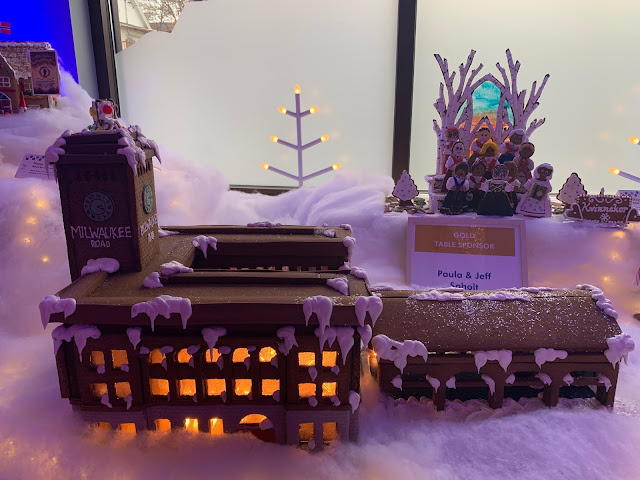 Mindekirken, the Norwegian American Lutheran Church located across the parking lot from Norway House is there, looking all ready for Christmas Eve (and who's service we will very much miss attending in person this year!). It even has edible stained glass windows! 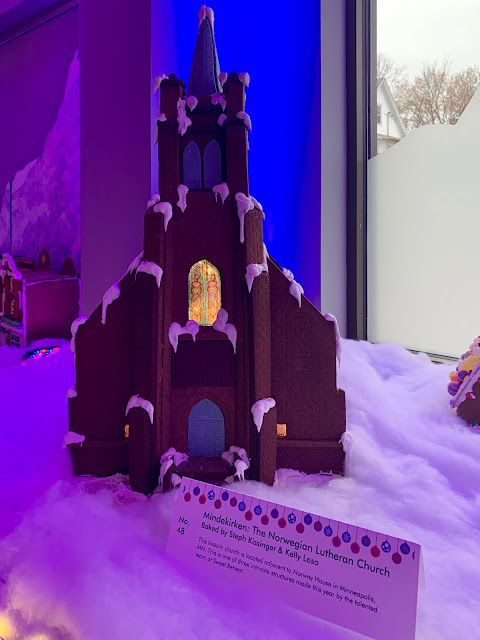 Another local favorite is represented at Gingerbread Wonderland with a little replica of Bogart's Donuts! I don't know if they offer ginger donuts in real life, but they do at this location! Cute. 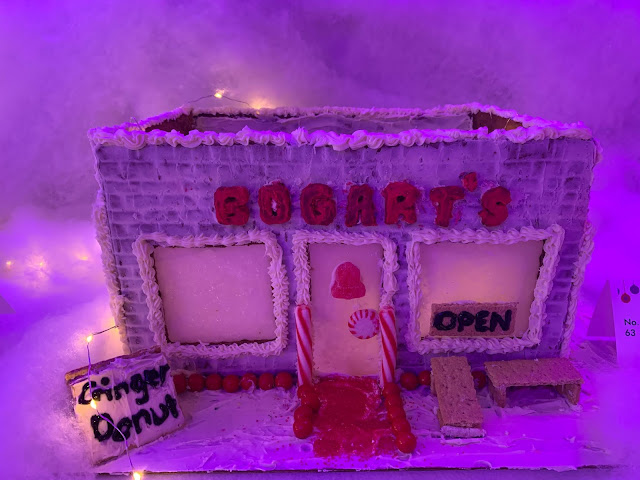 A Minneapolis Mercado by Sharon Born reflects both a big part of the ethnicity of the Franklin neighborhood of Norway House, and also the uprising here this Summer after the murder of George Floyd by Minnepolis Police. Maybe not the first thing you think of when thinking gingerbread houses, but you know what? We can NEVER FORGET. SAY HIS NAME!!! 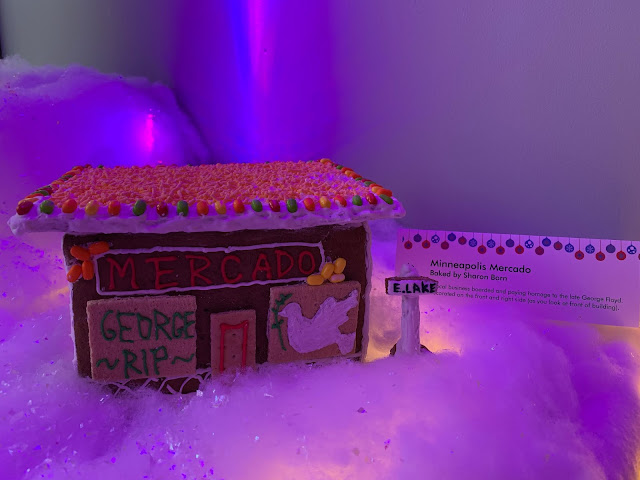 One of my very favorites was the beautiful depiction of the All My Relations Gallery right up the street from Norway House. Bright and colorful, and it really looks just like the fantastic cultural center. LOVE. 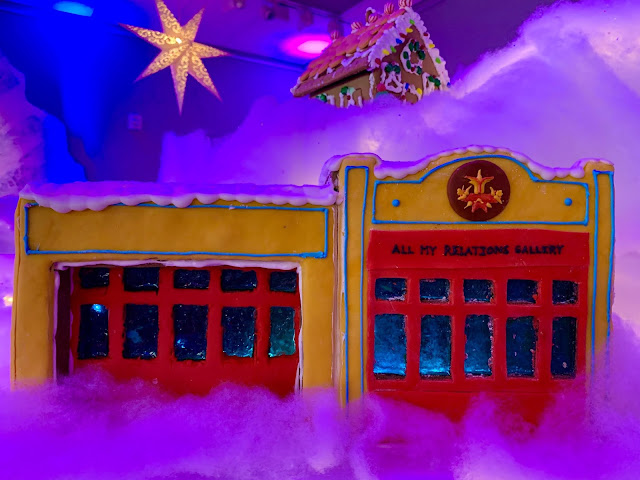 Minnesota is there in its entirety in a flat creation by Shannon Schaaf and Etta Fuhrman showing the entire state, even the Spam Museum! People were definitely getting creative this year, and no two entries are alike. 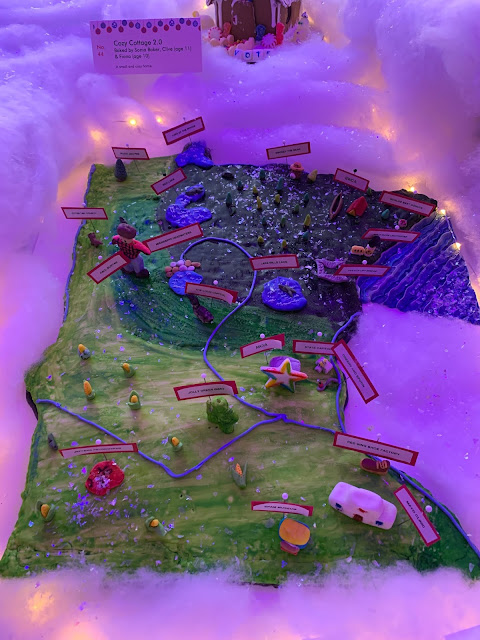 I love an A-frame, and this was another house by Liz Mullen and The "Chowgirls Team" that I would actually like to live in. Yay for the Chalet! 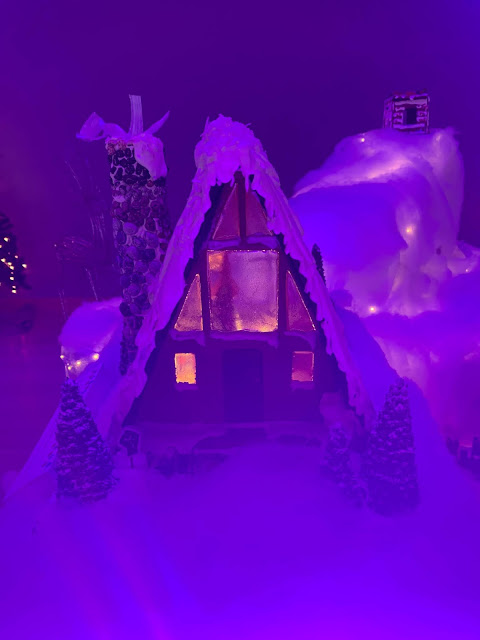 When we were kids my Mom would have us play "Little Red School House" on long road trips - really just a game of who could be the most quiet for the longest. It wasn't that fun, but it did give me a little kick of nostalgia to see this little red gingerbread Skole. 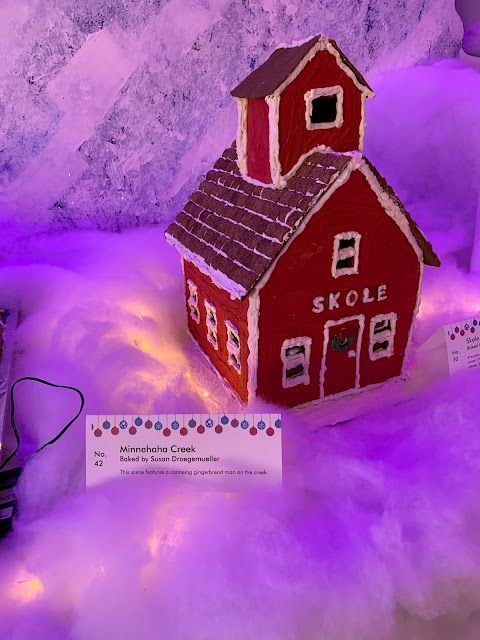 An EverGreen House - with skylights! 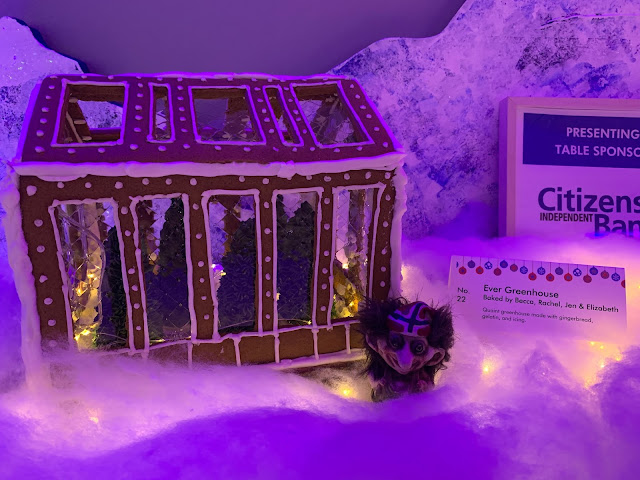 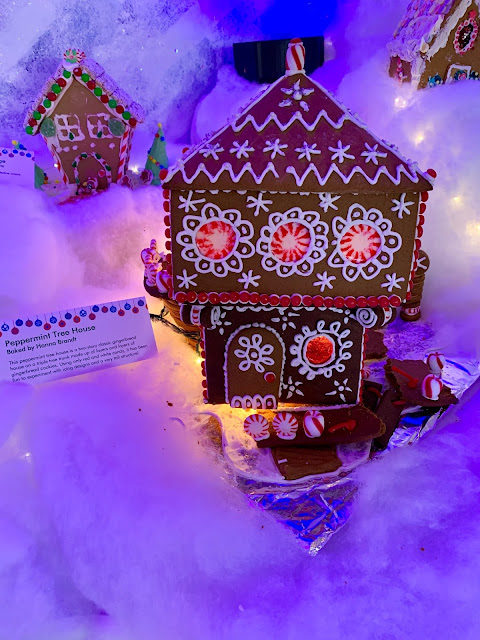 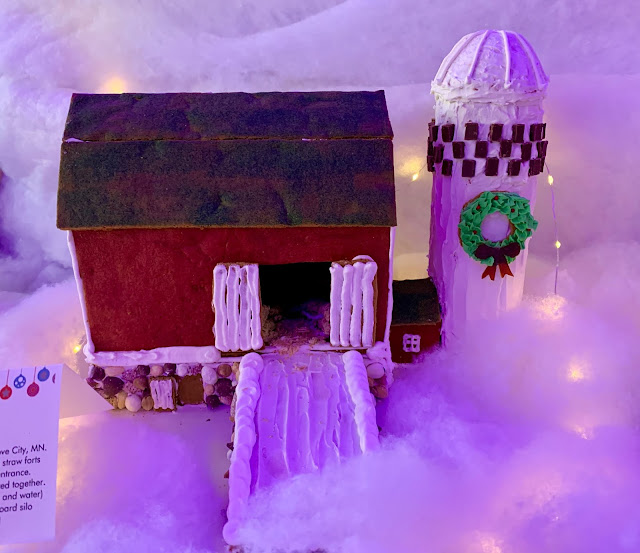 Another Barn with a cool silhouette barn dancing couple! 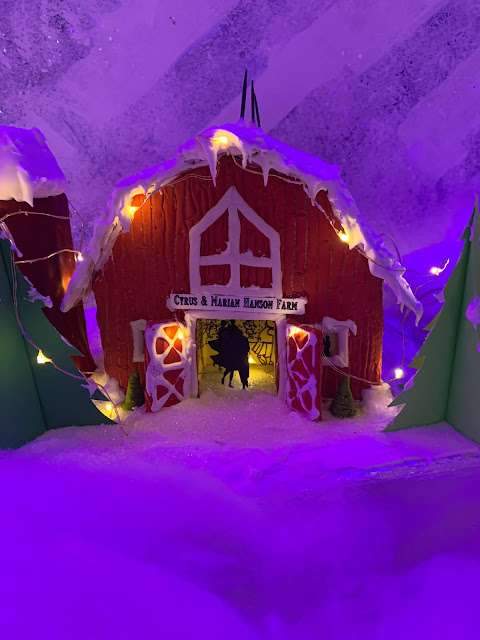 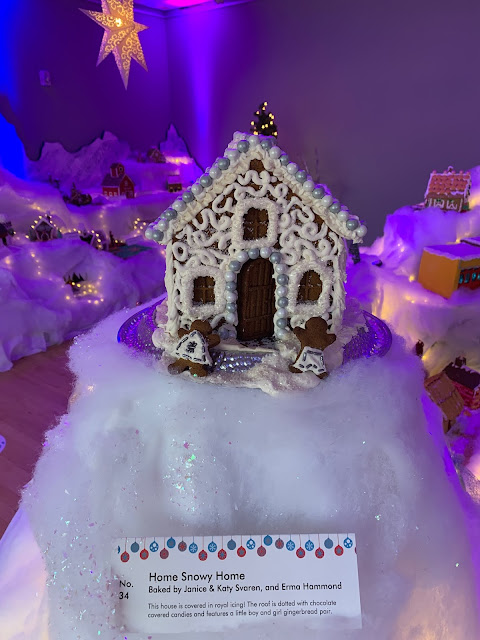 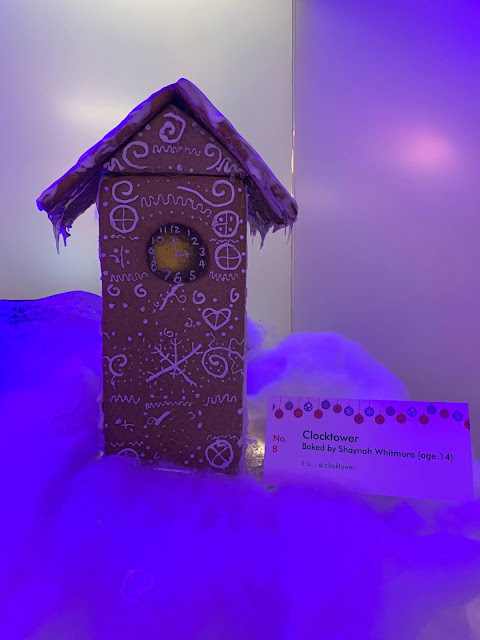 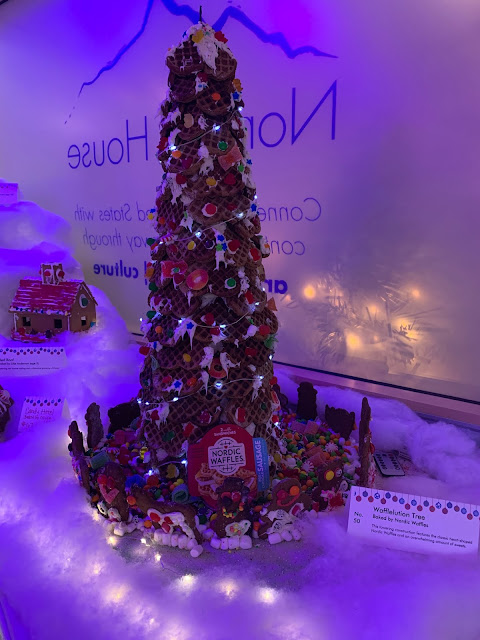 A red sauna done by one of my best friend in the world's daughters, Inga Wilhoit! 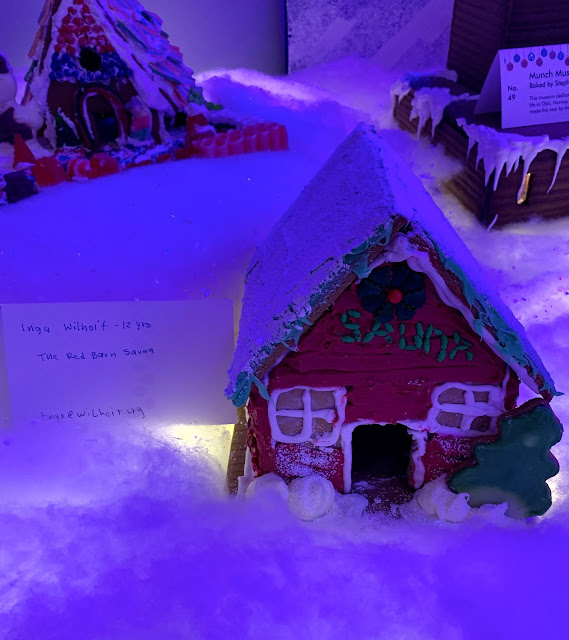 I think my absolute favorite was the gingerbread version of the Edvard Grieg house, Troldhaugen, in Bergen, Norway. It's an exact replica of the famous Norwegian composer's home, but the great thing about it is that the creator, Jay'd Hagberg, put a little miniature piano on the roof! 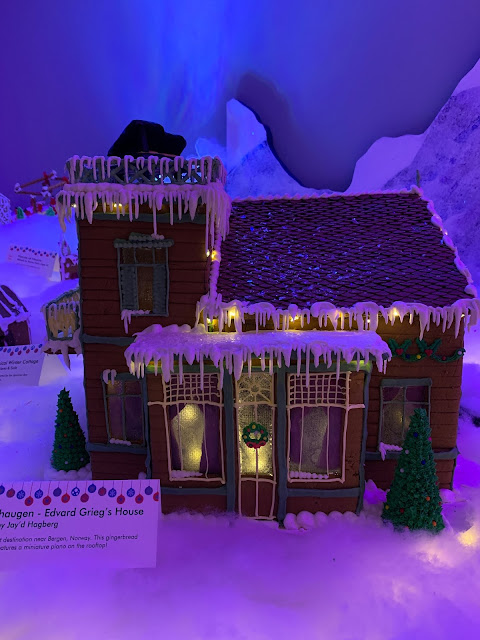 I heard a little girl say that her favorite one was the "one with the piano on the roof", and you could see in her eyes that it had made an impression. I would not be surprised to hear that she grew up to have a piano on her own roof - and now I want one too. What a treat for everyone! Especially if it was Grieg. 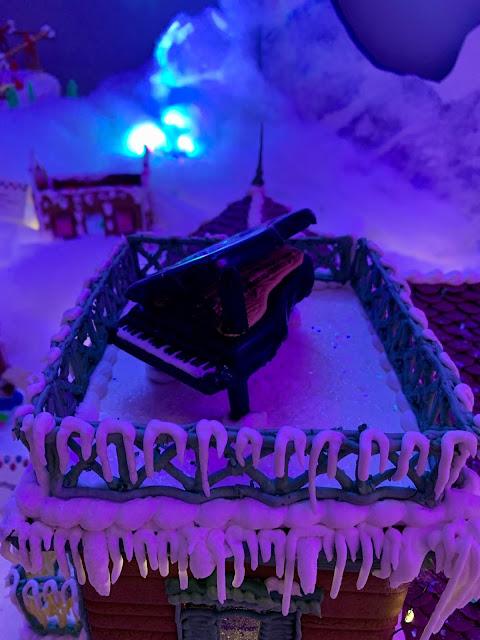 Everyone was having a grand - and very safe and very distanced - time taking in Gingerbread Wonderland as one of the very few things we could do this super weird holiday season, and then it all shut down on November 20th, and it doesn't look like it will reopen during the run of the show. It's a real shame, among many shames this year, but I hope you will enjoy these photographs, and maybe do the virtual tour via Norway House's website. It costs $5 to view, but this event is THE major fundraiser for Norway House each year, and it would be great to help them out. I made my own first ever gingerbread house this year, having been inspired by all of these greats ... but this is the only place you'll see it unless you come over to my Mom's, which you can't because she's at risk, so here you go - The Love Shack! 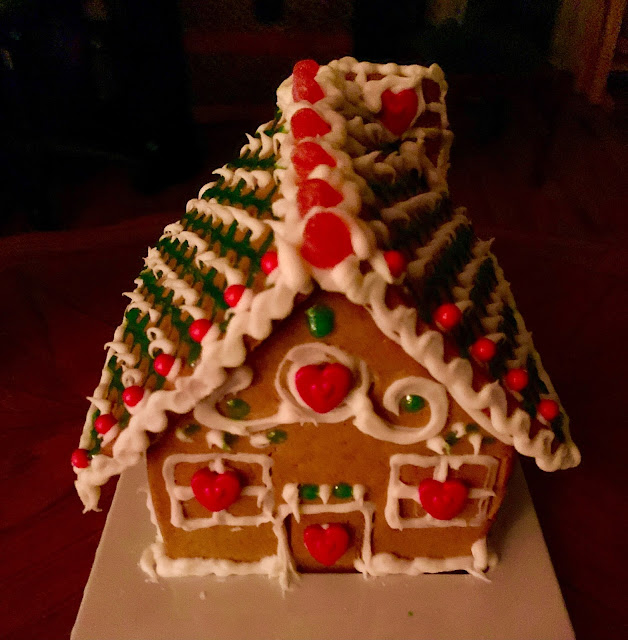 I've been out of my mind crazy busy, and apologize for so long between stories, but I just know that this next year HAS to be better for us all, and that there will be so many great new stories to tell that it's all I'll have time for. Right? So ... enjoy this holiday season as much as you possibly can. Be inspired. Get creative. Know that there is still beauty and fun and magic in this world, and it's all right there if you really look for it. I send love and my Merriest Christmas wishes to one and all around the world!