Clogtown: When Home Won't Let You Stay: Art and Migration at MIA


I really needed a break from the world yesterday, and that feeling often leads me to an art museum. This might be a particularly great outing to think about these days, and everyone tends to give each other space and quiet in museums. 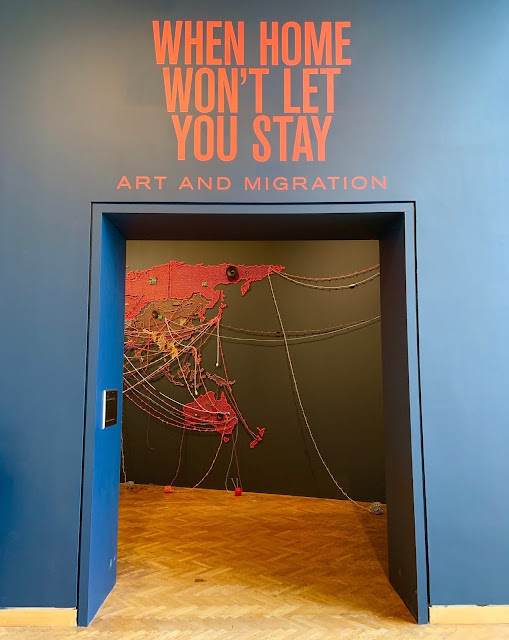 I've been itching to get back to the Minneapolis Institute of Art to see the When Home Won't Let You Stay: Art and Migration exhibit since the day I saw the Ai Weiwei work Safe Passage and its thousands of life jackets adorning the pillars out in front of the museum, so that's where I headed. 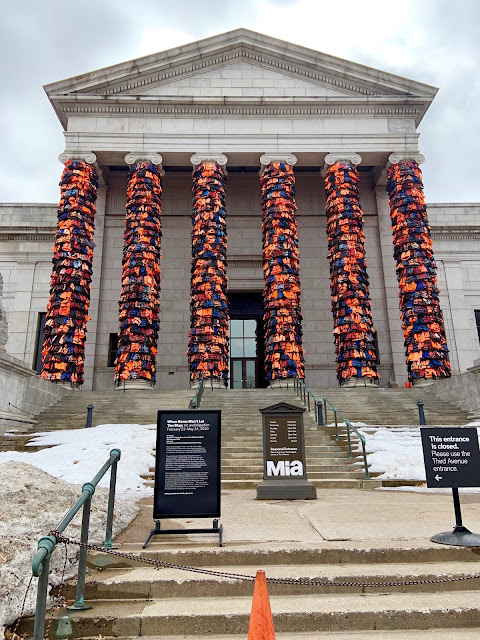 This extremely emotional exhibit might not have been the exact escape I was looking for, as I was choked up when viewing much of it, but the recent string of extra excellent shows at MIA continues. It's wonderful and thought provoking, and really something to see - and reflect on. 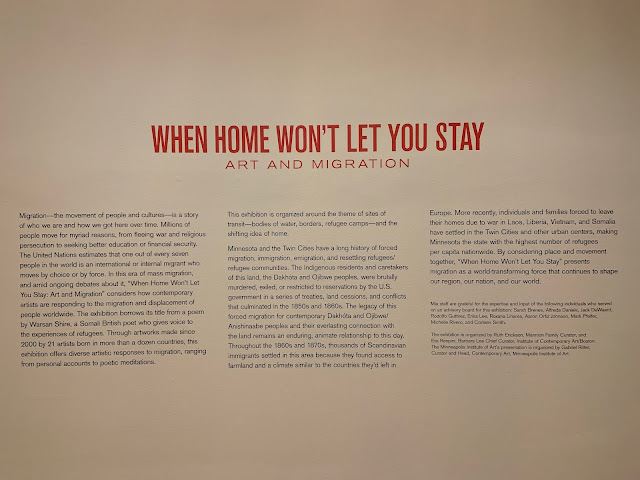 Minnesota has the highest number of refugees per capita in the nation, a fact I didn't know until I was at this exhibit. America has always been a melting pot - that's the beauty of it! - and unless you're Native American, we're ALL from immigrant families, so I've never really understood the problem some people (usually old white men besides Bernie Sanders) have with it. 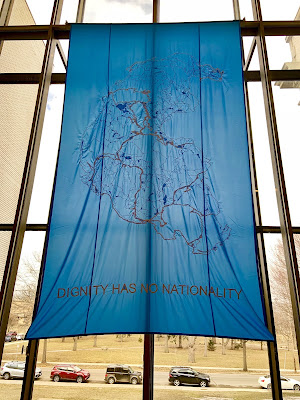 Migration has shaped our world, and we really are now one giant global village at this point. How refreshing it would be if our individual governments could act like it, right? The piece that opens the show is called Woven Chronicle, 2011-2019, by Reena Saini Kallat, and the balls of yarn show the paths of world migration, accompanied by a kind of heavy soundscape that is meant to echo the hum of global movement. Impressive. 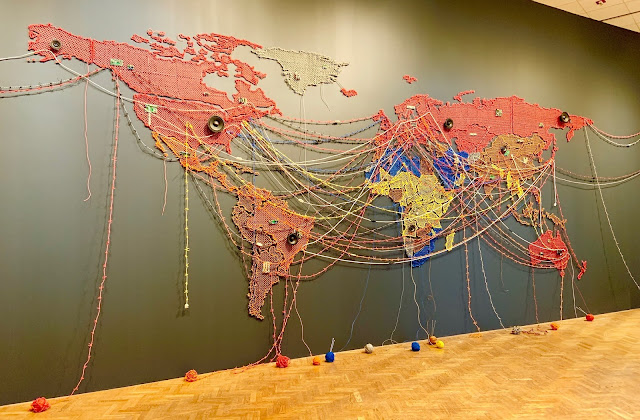 Exodus II, 2002, by Mona Hatoum, a Palestinian refugee to the UK, consists of two suitcases linked together by human hair. It makes one wonder what someone would stuff into their luggage if you could only take along a little bit of your life. The hair humanizes the thought, and to me, made it sadder. 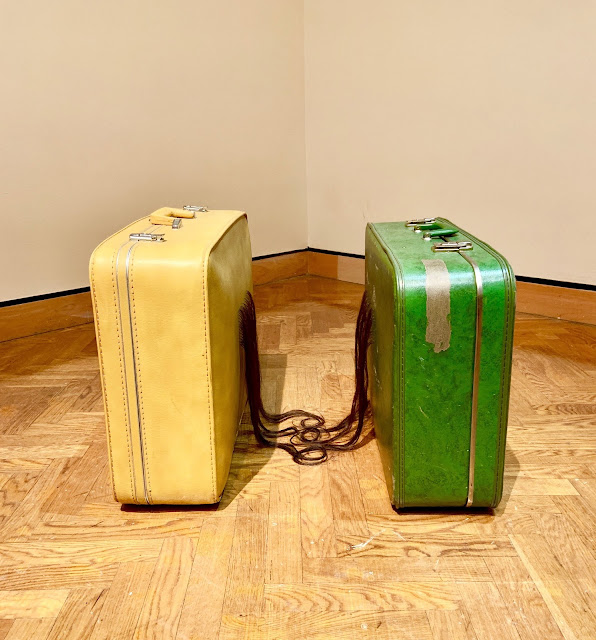 Similarly, Temporary Storage: The Belongings of Juan Manuel Montes, 2017 by Camilo Ontiveros shows us the personal belongings of Montes, believed to be the first DACA recipient to be removed from the United States by Trump. Ontiveros got permission from Montes' mother to create a sculpture of his belongings tied up with rope. It's heartbreaking, as is so much of this show - but it needs to be a part of our global conversation to improve life for everyone. 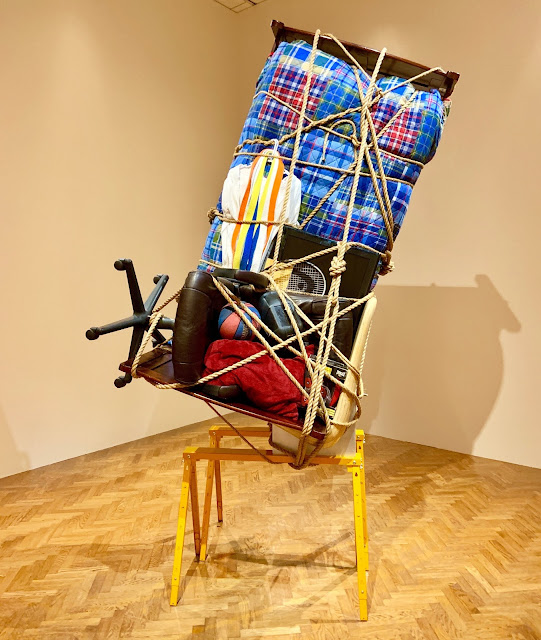 Everything #4, 2004 by Adrian Piper is equally heavy. An oval mirror printed with "Everything Will Be Taken Away" is the artist forcing people to literally face this reality ... and deal with it. Piper was a New Yorker working in Berlin, when she was placed on a suspicious traveler list, and has refused to return to the States, resenting any such authority of her movement - and I don't blame her. This piece insists that we look within ... like who do we really want to be as a people? We can do so so so much better. 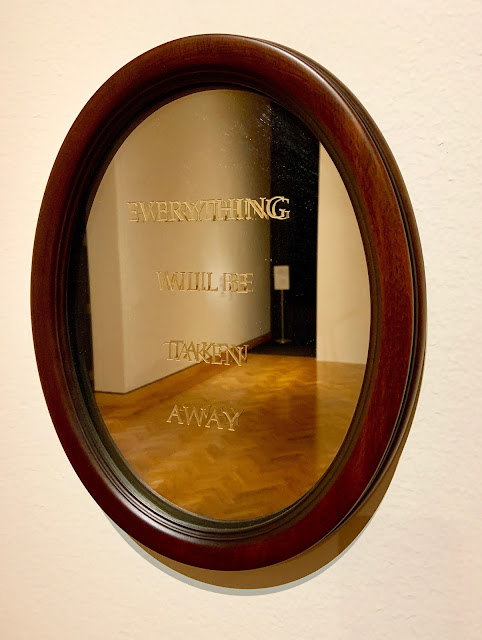 A very heavy and similar piece to the life jackets outside MIA is Le Mer Morte (The Dead Sea), 2015 by Kader Attia. The clothing strewn across the floor represents the 1 million people who fled across the Mediterranean Sea in 2015, with 3,753 missing and believed to be dead. The blue clothing items help you visualize the people who have washed ashore ... the HUMAN BEINGS that died looking for a better life. Incredibly sad, this one is tough to take in. (As are the many video installations of people speaking of their harrowing experiences throughout this show). 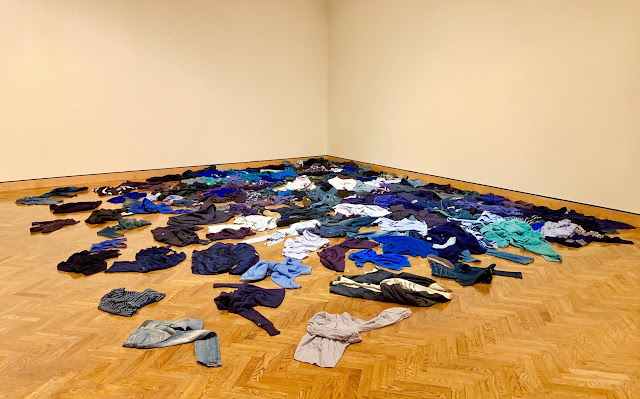 Xaviera Simmons says of her piece Sundown (Number Twelve), 2018, "Black people, especially those who descend from American chattel slavery, have been in a constant state of migration since the country's formation." Her piece shows a character in colonial dress with an African mask, holding a photograph of people during the "Great Migration" (1890-1930), and was one of my favorite works in the exhibit. "Sundown" refers to towns that were not safe for black people after dark. The work kind of sums up that entire experience and history in one beautiful image. 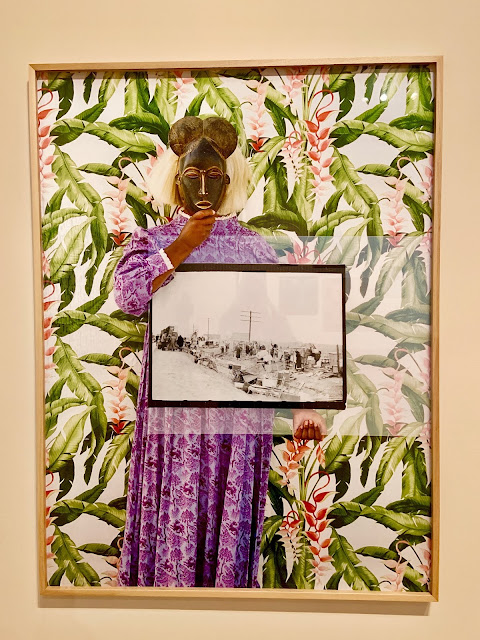 Simmons also presents the text painting, Found The Sea Like The River, 2018 which features excerpts from Christopher Columbus' diaries when he was exploring the New World. It focuses heavily on the nature, and conveniently leaves out the violence and terror these explorers rained down on the indigenous people that already lived here. I'm ALL for Indigenous Peoples Day over Columbus Day, so I dug this one. (And I'm firm on calling it  Lake Bde Maka Ska too). 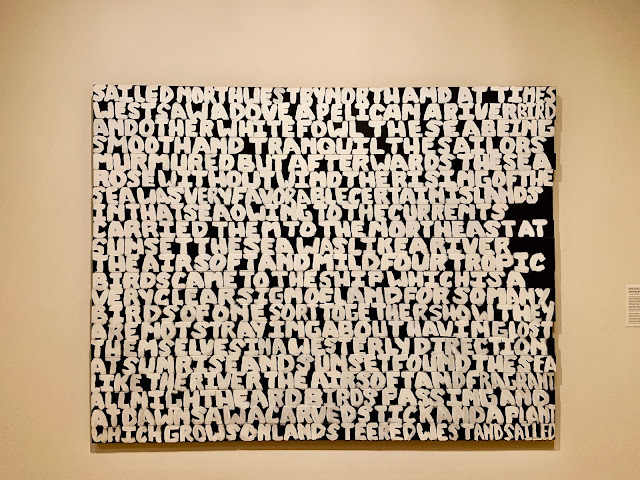 Do Ho Suh presents Hub-1, Entrance and Hub-2, Breakfast Corner, 26-7, Sungbook-dong, Sungboo-Ku, Seoul, Korea, 2018 as interactive pieces that depict the process of migration, "where each step of the process is like crossing another threshold." I didn't really get it until I read the blurb, that says it evoked memories of Suh's childhood home, and that the translucence is like the hazy memories from other times. Cool. 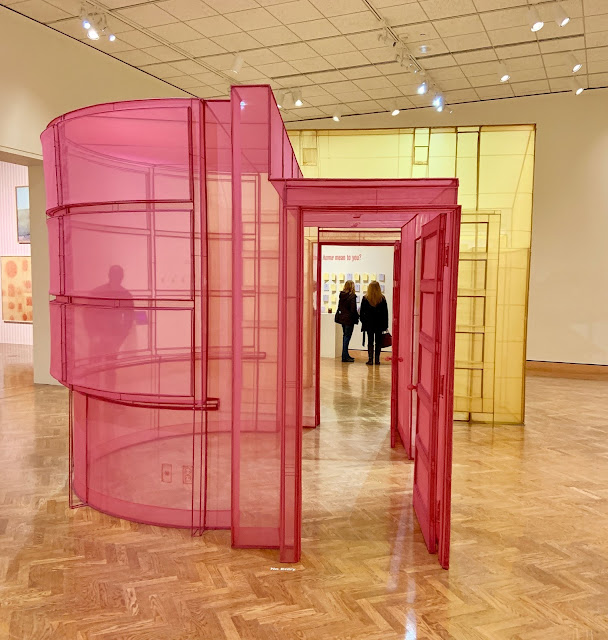 I loved the works by Aliza Nisenbaum, who MIA invited to have a residency to work with groups in the Minneapolis Whittier neighborhood. Her bright pieces, full of color and life, depict everyday life in the immigrant communities surrounding the museum. Nimo, Sumiya, and Bisharo Harvesting Flowers and Vegetables at Hope Community Garden, 2017 shows the Somalian women who care for this garden. Beautiful. 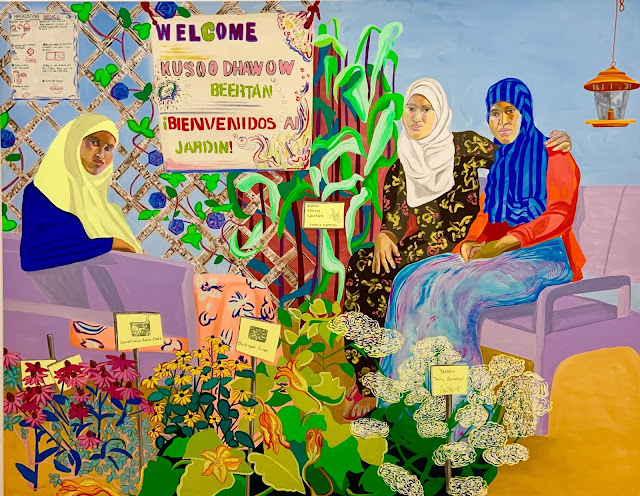 Nisenbaum's La Talaverita, Sunday Morning NY Times, 2016 portrays a lazy Sunday morning in a Mexican community in Queens, NY. There is such beauty in the everyday, if only we can be more aware of it. 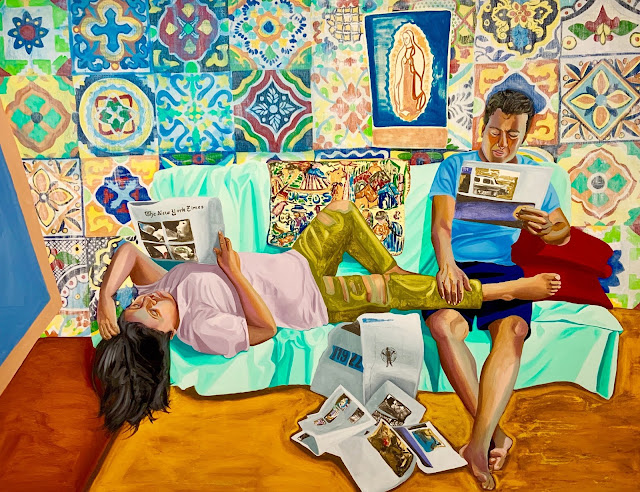 Angel Exterminador/Exterminating Angel, 2015 by Guillermo Galindo is an actual section of the Mexican-United States barrier. As awful as that thing is, Galindo turns the sculpture into an instrument that can be played by the artist or other performers. His intent was to make more noise than the anti-immigrant factions out there ... and rightly so. 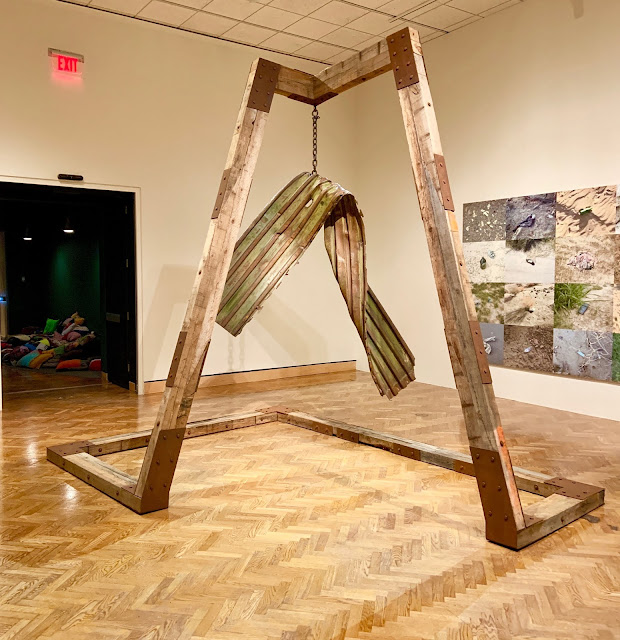 An entire giant wall is taken up by Artifacts found from California to Texas between 2013 and 2015/Artefactos encontrados entre California y Texas de 2013 a 2015, 2013-2015 by Richard Misrach was another real heavy one. 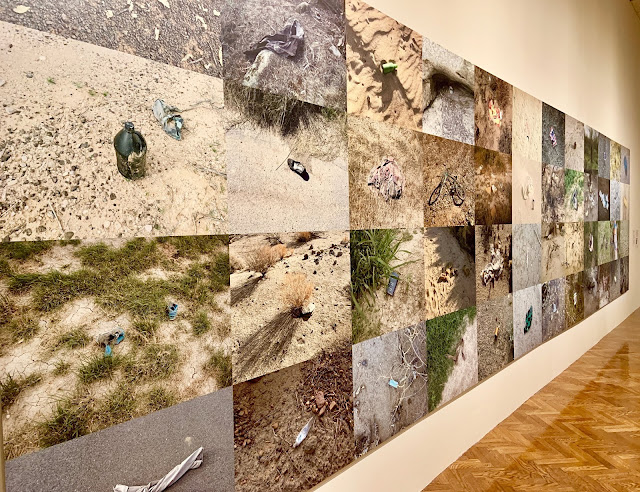 Misrach photographed the remnants left behind by travelers throught the desert trying to get to the border ... clothes, water bottles, bikes, toys ... that once again serve to humanize the immigrant experience - and maybe make it a bit easier to put yourself in their shoes. 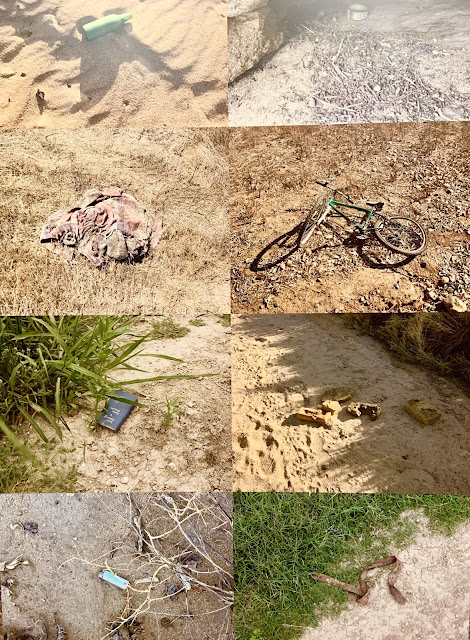 My very favorite part of the entire exhibit was The American Library, 2018 by Yinka Shonibare, 2018. A whole room is filled with cloth covered books, with the names of American immigrants  or members of The Great Migration within the U.S. who have made their marks on American life stenciled there on the spines in gold foil. 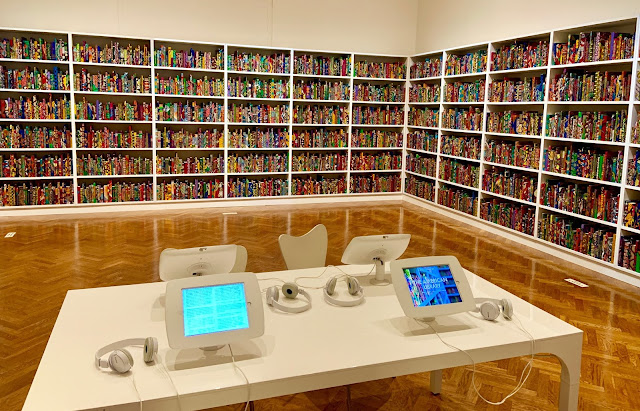 There is a website that invites you to sit down and read the stories of the names on these books - or to write your own. The interactive quality makes it feel like a real library, and it was fascinating to sit and listen to a few of the stories that make up America. It was jolting, however, to find that it does not include Native Americans, ignoring the cultural contributions of our original inhabitants - sort of like our government does. 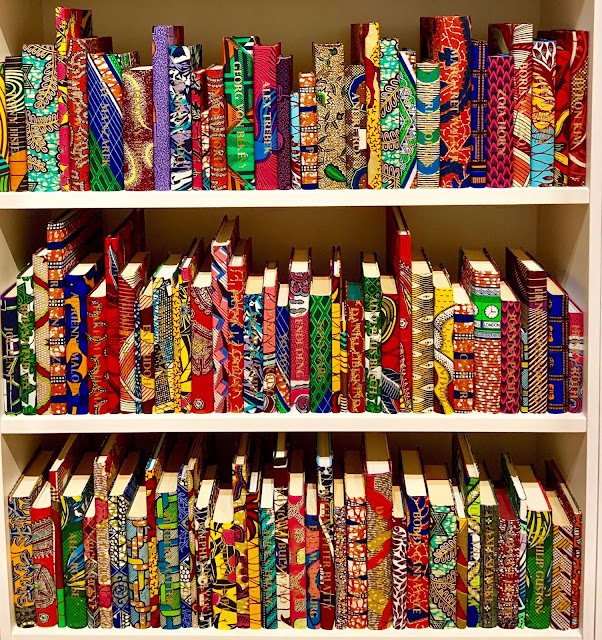 I zoomed in to show the detail on the gorgeous books, and was delighted to find that the spot I zoomed in on held the names of Yoko Ono, Joe Hill, and Bob Marley - all personal favorites of mine without even looking. I could have spent the entire afternoon just looking at the spines, and thinking about all of the wonderful people that have created our country by leaving theirs. This room allowed me to leave the exhibit with hope, rather than despair. What a beautiful way to acknowledge all of the glorious tapestry of lives and nations that have combined into this one ... may we honor it also in our own everyday lives. 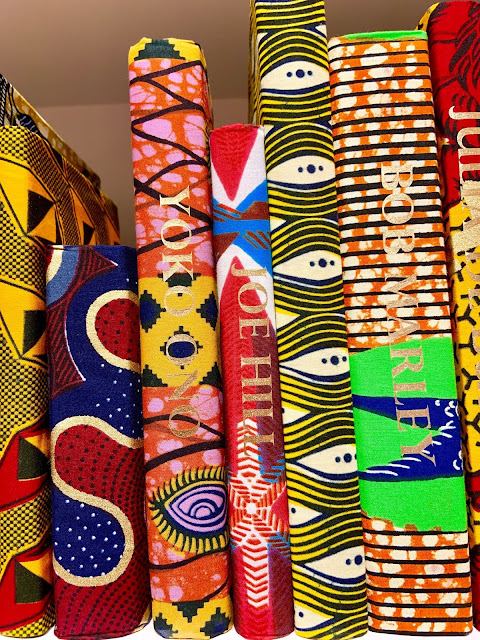 The exhibit concludes with CarryOn Homes - Living Room, 2020. It's a cozy space strewn with pillows (handmade from clothing linked to the artists) that allows attendees to sit and relax, and find some calm from the difficult realities they just viewed. Interviews are played on the screen from members of the CarryOn Homes art collective, telling their stories of being artists and immigrants from all over. There are resource books there too, so that immigrants and refugee communities can come together with shared connections. It's all very thoughtful, and again, offers some hope. 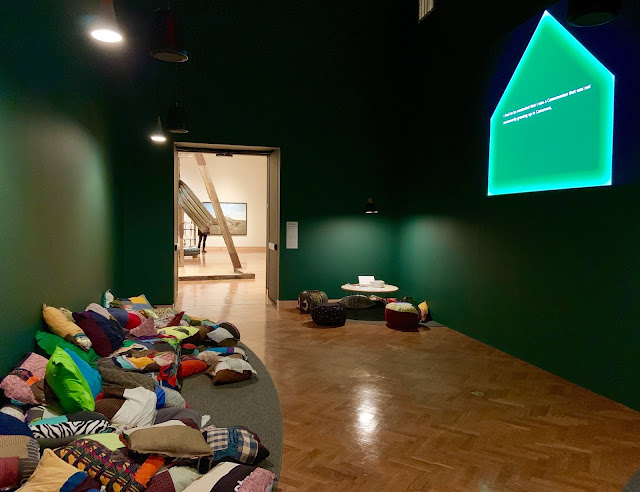 There was again a wall of thoughts and comments from people who have come through the exhibit, asking "What does HOME mean to you?" Even a quick glance lets you know that this show is making people think. I saw one that asked in the current climate, with everyone freaking out over the pandemic and hoarding things and being forced to quarantine, and not travel, and not attend events ... that maybe now Americans can stop and think about how life is for refugees. Now we're all being forced to do (and not do) things we don't want to do ... how does it feel? Maybe all of this will cause a big swell of empathy when everyone FINALLY realizes that we are all one, and all in this together. I hope so anyway. 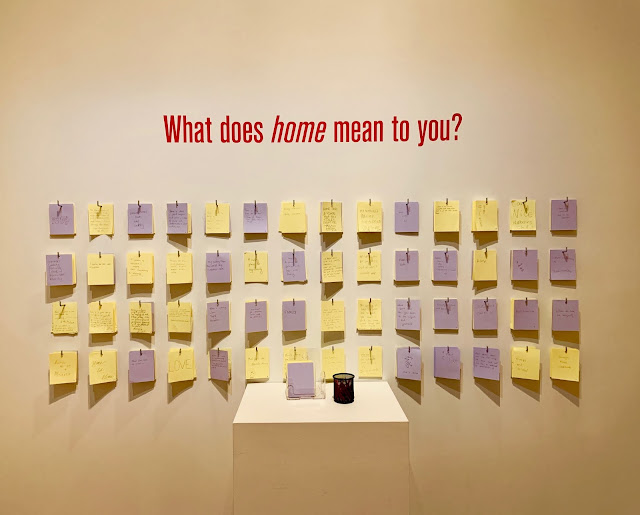 As you're coming or going to the exhibit, there is a gigantic photo (5,776 of them!) wall by Ai Weiwei, depicting the thousands of refugees crossing the Mediterranean ... the same ones that wore the life jackets hanging on the columns outside. 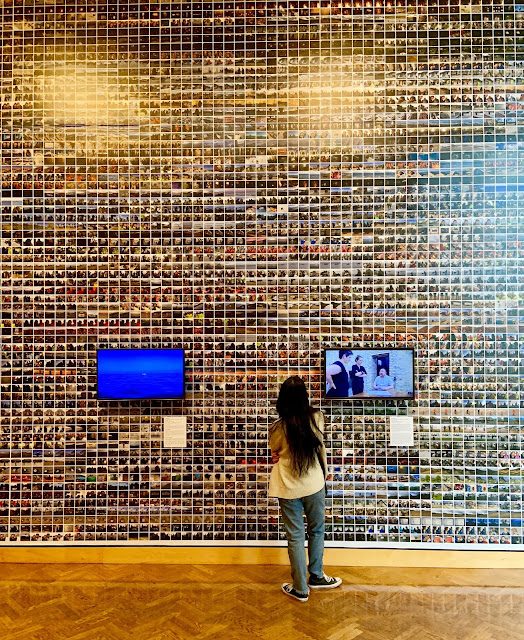 The faces again show the actual humanity involved in these nightly news stories, and let you know that world policies affect real people, people just like you and I. 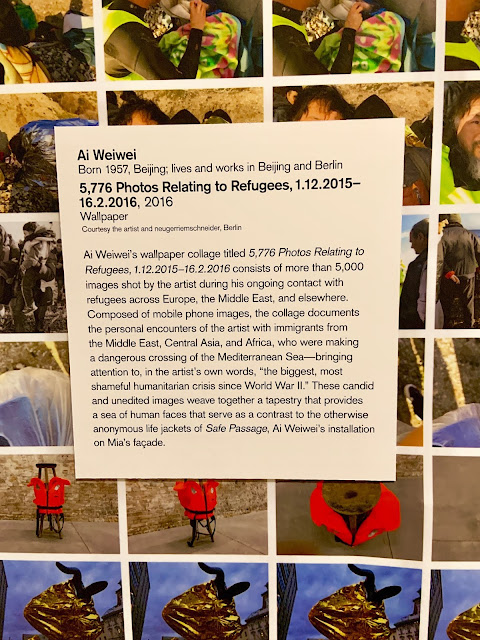 People that COULD be you and I real soon here if some massive progress isn't made in the fights against climate crisis, looming wars, famine and disease. Think about it ... just like this excellent social studies class of an art show asks you to. 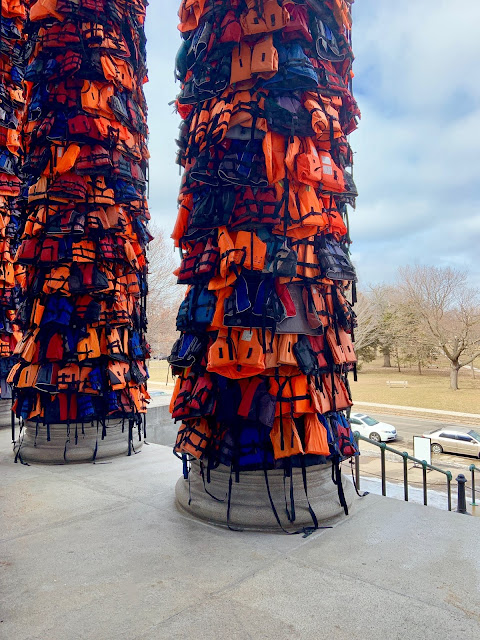 Thank you to MIA for giving us yet another beautiful, important show that exemplifies that spirit of art being the hammer that shapes the world. Well done! 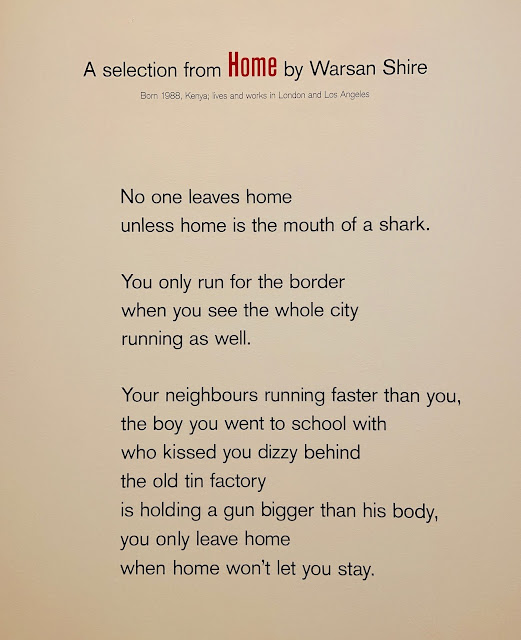