The Black History Of Venice - A Legacy To Fight For

It was a beautiful, sunny day last Saturday in Venice, yet several of us spent the afternoon inside. It was well worth it, because we were treated to stories of the history and legacy of our African-American community in an event at the Venice Library to celebrate Black History Month. 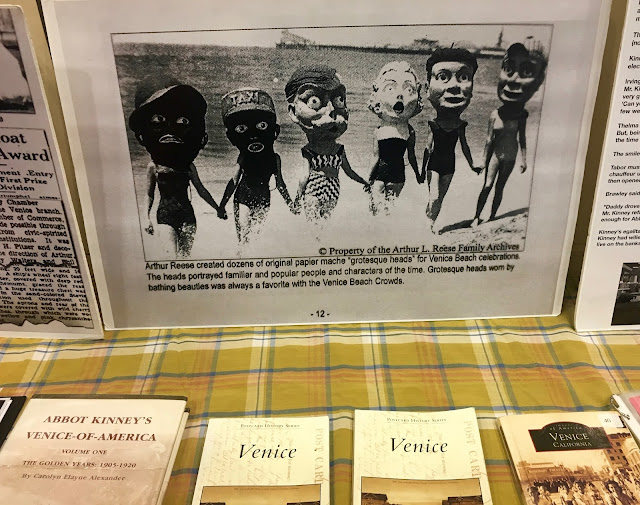 There is a wonderful display set up in the library's meeting room, featuring vintage photographs from early Venice, with all of the wonderful history and massive contributions our African-American residents have given to Venice since its inception. 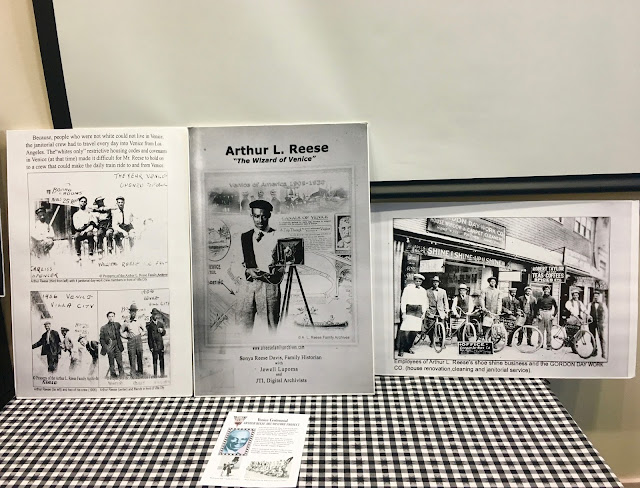 There needs to be a book dedicated to this important aspect of Venice, and in just one lap around the room I learned so much about our history that I never knew. Very cool stuff, like how early resident, Arthur Reese, created big headed costumes for the early Mardi Gras celebrations in Venice (and don't forget to come and parade with the modern Mardi Gras revelers at noon this Saturday on the Boardwalk!), among many more historical contributions. 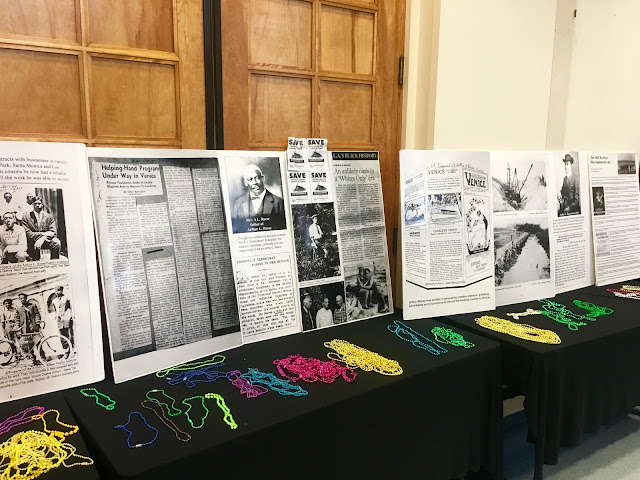 The speaking panel opened with a prayer from Reverend Dennis Moore, who is pictured in one of the old photos as a little boy in the church choir at First Baptist Church of Venice. That church was the main focus of the panel, whose members took turns getting up to speak on the legacy of that church in the Oakwood neighborhood. The church was sold out from under its members last year, prompting a fistfight that required the police to come in the sanctuary when the former minister, Horace Allen, told the congregation about his sneaky sale of the 109 year old building that was their house of worship for generations. A historical building across the street from historical Oakwood Park sold to a wealthy couple (Jay Penske, a media mogul who owns Variety, among other publications, and his wife, model Elaine Irwin) to be another massive, single-family home designed by Venice-based DU Architects, who should be ashamed of themselves. As if there aren't plenty of other places they could have built their BUB, they chose a church that is over a century old?! The members don't know who got the money (6.3 million!), where it is, nothing. If they'd been given the chance, they would have all rallied to buy it back themselves, but it was done all stealthy, without debate or vote. You can't blame the congregants for being righteously outraged. It's an actual crime against their history, and they're going to fight it every step of the way. As we all should. While these things always have many sides to many stories, the fact remains that a house of worship was sold without due diligence from the people to whom it matters most. Tht's not right. 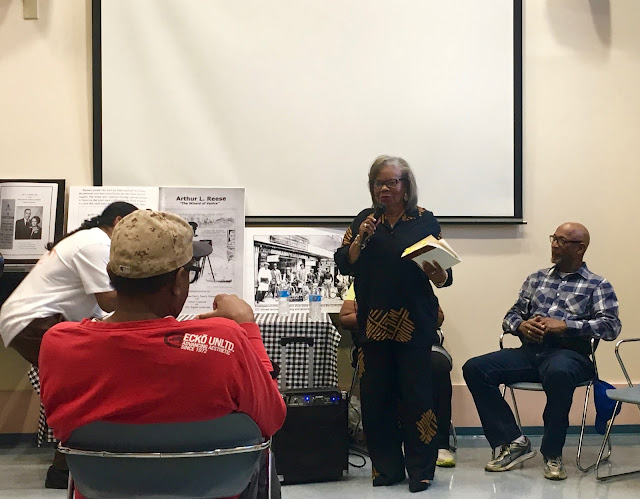 Naomi Nightingale led the panel of Venice elders, saying "It's a LEGACY that we're fighting for." She told us that there used to be four Baptist churches in Venice ... we're now down to just one (Friendship Baptist). The Oakwood area is deeply historic, and as Nightingale explained, "We lived in a community that we helped to prosper." She spoke to the fact that Oakwood has always served the black and brown communities of Venice, and we're seeing in real time the destruction and dissolution of the contributions that African-Americans made to this community. She remembered having to sit in the back of the Fox Theater on Lincoln, and it feels like things like the sale of this great, old church are making that entire community take a back seat all over again. She said that when the "monstrosity" of a house that went up on Sunset Avenue, she felt violated. All of the changes in demographics, houses, zoning laws, parking (she can no longer park on her own street that she shares with Gjusta), must be adapted to, but sometimes "Racism and discrimination is subtle. Sometimes it looks like economics, or just "change", but if you look deep enough, you're thought of as less-than, or not as entitled. Let there be SOME consideration to our contributions, and our sites like our churches." They have been offered a plaque in the place of their sacred worship site. That their own community paid for. PLEASE.

Each Sunday afternoon, the displaced church members - and the Venetians who support also support their cause - stand in front of their boarded-up church, waving at passersby with their "Save Our Church!" signs, all in an effort to SAVE. THEIR. CULTURE. It's that basic, and that serious. Nightingale urged everyone to "Know your history, because that will be your future", and adding that "When I was a kid, Venice was open to EVERYONE" - as it should still be, and closed by saying, "Remember that love will send us a long way." 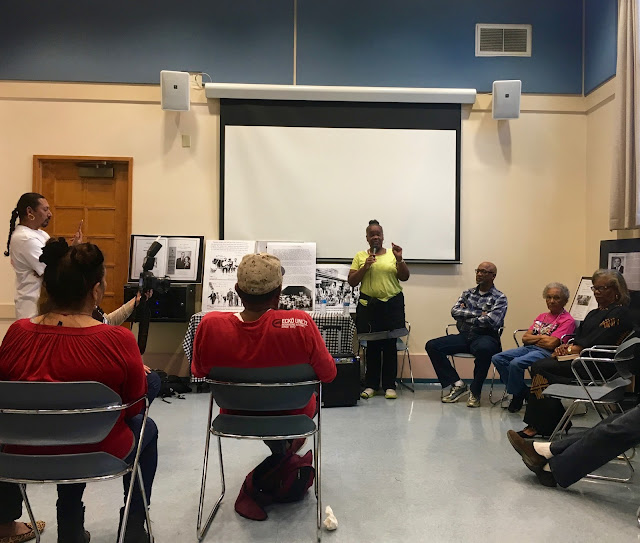 Laddie Williams took the microphone next (she being the "Malcolm X" to Nightingale's "MLK"), and spoke for all of us when she said, "We don't want no $40 martinis. We want the artists. The musicians. The locals. Our architecture that is being torn down for BUBs. The people that helped to make Venice famous." She spoke truth to power, and effectively rallied us all for the cause, even though, "Our job will never be finished." As supporter Beth Allyn writes on the sidewalk in front of the church every Sunday, "Do not destroy what God has built."

Direct descendant of Irving Tabor and Arthur Reese, Jataun Valentine also spoke to the importance of preserving the deep history of Black - and all of - Venice history. She carries on the Reese tradition of making Rose Parade floats at her house on Vernon, and is full of stories of her founding families' lives and legacies. These elders are our living history, and certainly don't deserve to have it swept away in the name of ever more greed and white-washing of a vibrant and historical community. 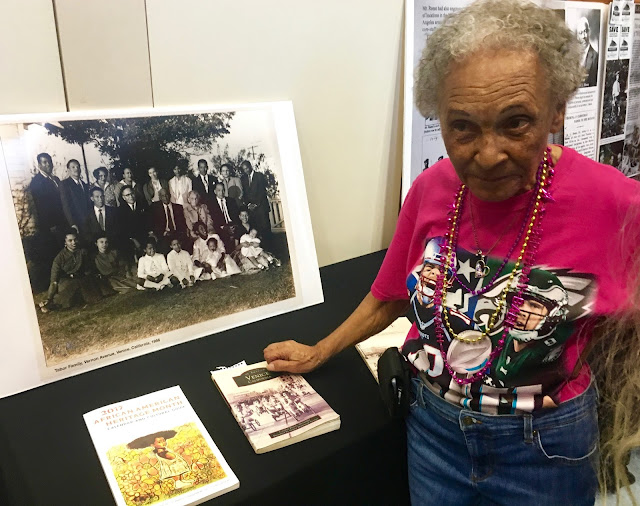 "Venice is US. WE'RE Venice, not these people coming in for monetary reasons ... it's OUR heritage. Venice is Venice because of the people and its DIVERSITY," said Laddie Williams, echoing what several of us have been saying until we're blue in our faces ... not the diversity we're speaking of. She introduced her "indigenous brother", and organizer Mike Bravo took over to close out this incredibly great and informative event. He is a fifth generation Venetian, whose father was killed right near where he now stands with his First Baptist Church of Venice friends in protest every Sunday. "I believe in sacred sites. We still have our house, thank God, but it's my duty to stand up for what is right. The people who are out there on Sundays .. THAT is who Venice is. We've given Venice life, we made it beautiful, and we're trying to take it back in a righteous way." Amen! Awomen! Bravo sang a prayer song in conclusion that was beautiful, touching, and also a rallying cry. 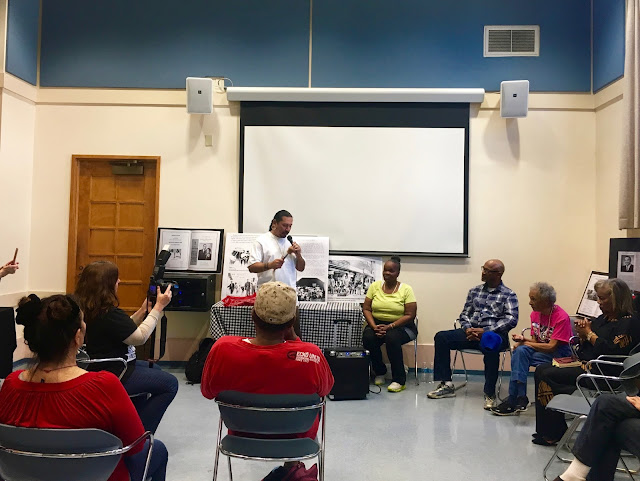 This isn't right. It's terribly sad, and you'd have to be a greedy interloper yourself to think otherwise. You can hear more from everyone involved again at the Venice Library on February 17th to learn more for yourselves. You may also join in their protest in front of their church at 600 Westminster, every Sunday from 1-4 ... because their fight is our fight. We're a community, and we're all in this together. Thank you to everyone involved for an informative and inspiring afternoon. See you Sunday!