Autumn In Minnesota - Living In Color

I just got back from a sorely needed hit of the refresh button back home in Minnesota. I hadn't been back for Autumn in years, as I usually go back for Christmas, so the motherland in all its blazing fall glory was really something special. People were laughing at me and how hard I was tripping on it all, but I didn't care. It was so pretty, it all almost looked fake. 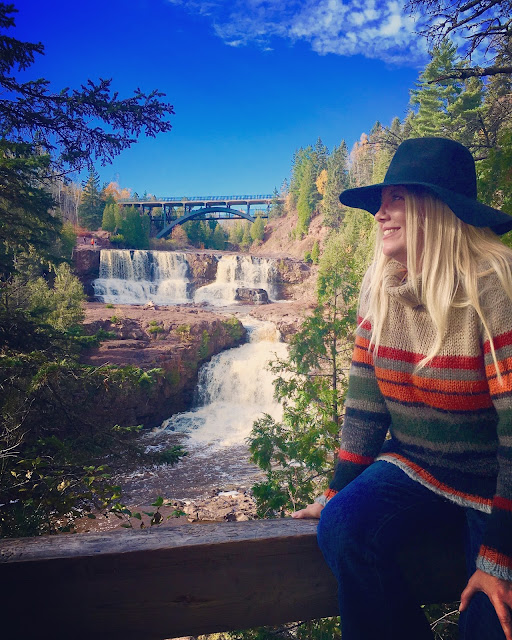 When you don't live somewhere you try to pack in all you can while you're there. I never have time to really get out into the country when I'm back home, so that was a priority this time. From my beloved Wood Lake Nature Center right in the middle of the city, to the North shores of Lake Superior almost at the Canadian border, Minnesota was really showing off. 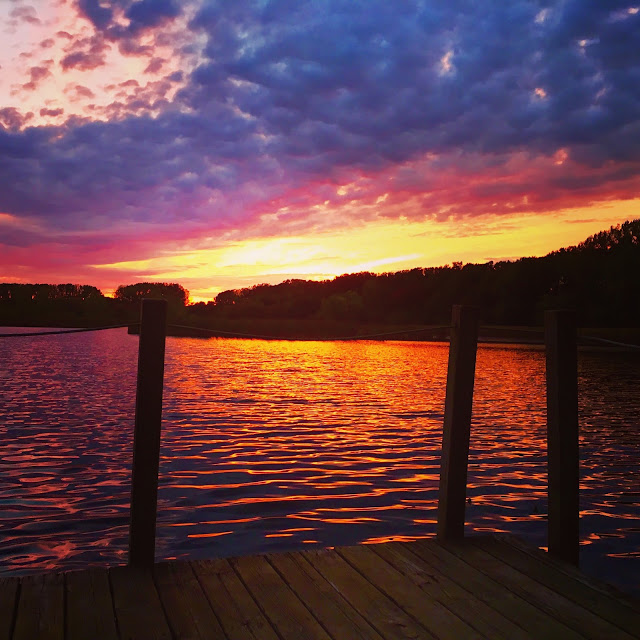 I'm not a professional photographer, but you didn't have to be, it was super easy to take an awesome photo just by hitting a button on your phone. It was like you felt more fully alive just looking at the beauty all around you. Even the people that live there were like "Wow!" - because sometimes you don't get out and take advantage of what's right there in front of you. 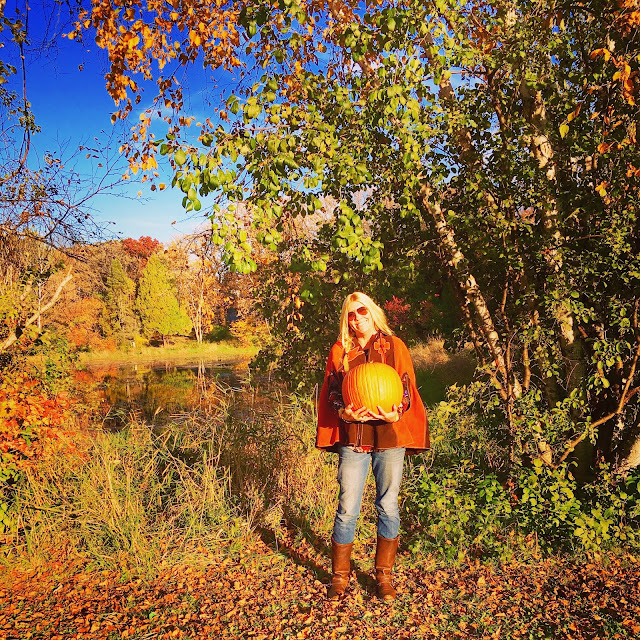 I was there also to attend the Prince Tribute show at the XCel Energy Center, and that was great to finally have that celebration and kind of closure together with all of my hometown folks. The entire city was lit up in purple again, and it felt wonderful to be there ... true Minnesota pride was in full effect. 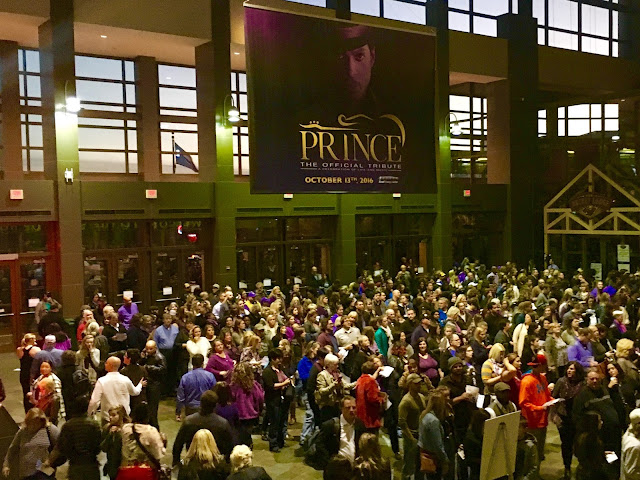 There was more of that when the news came out that our other hometown hero, Bob Dylan, had won the Nobel Prize for Literature - the first time such a reward has ever been given to a musician. That was so cool, and the pride for that is shown many stories high in downtown Minneapolis in an excellent mural. There was also the first episode of the new edition of Prairie Home Companion when I was there, and I think the show is in good hands with new host, Chris Thile. 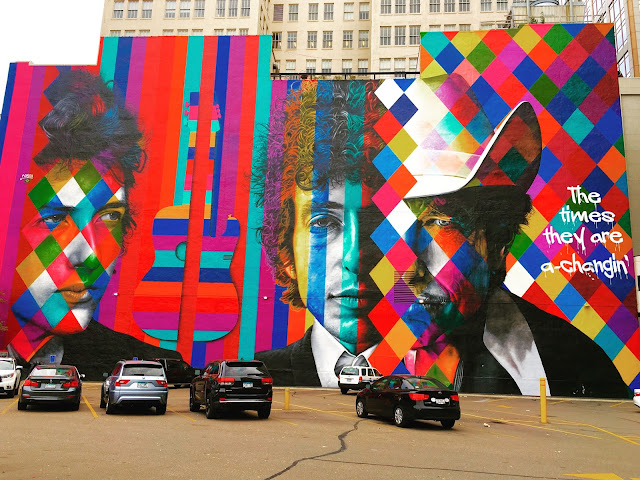 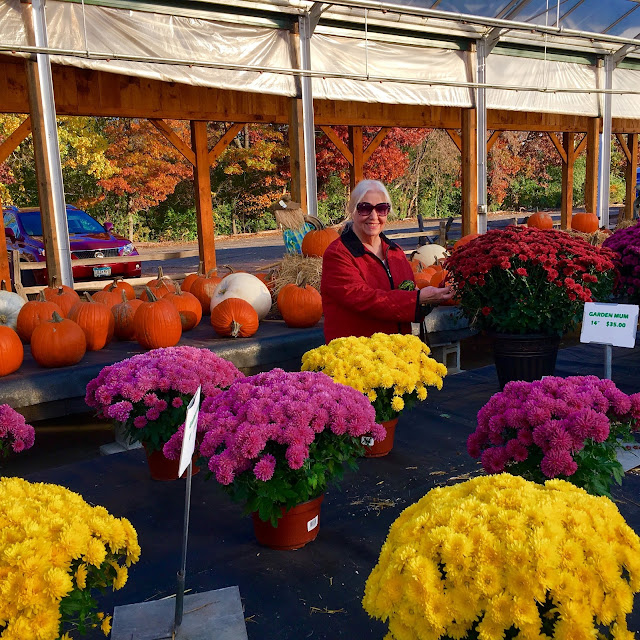 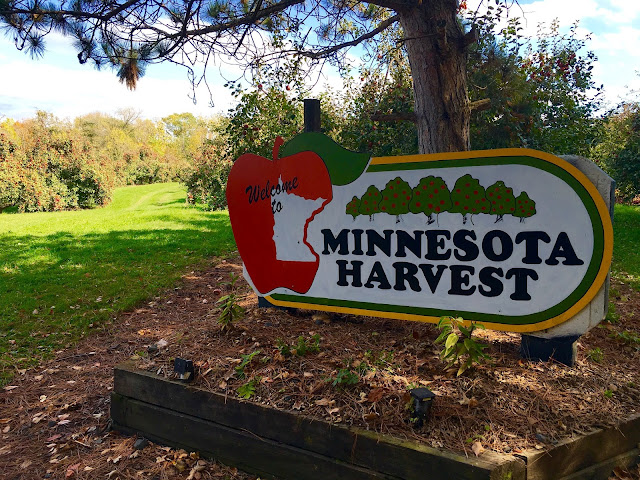 The weather was so gorgeous, everyone seemed to be in a good mood the whole time too. You really couldn't help it. 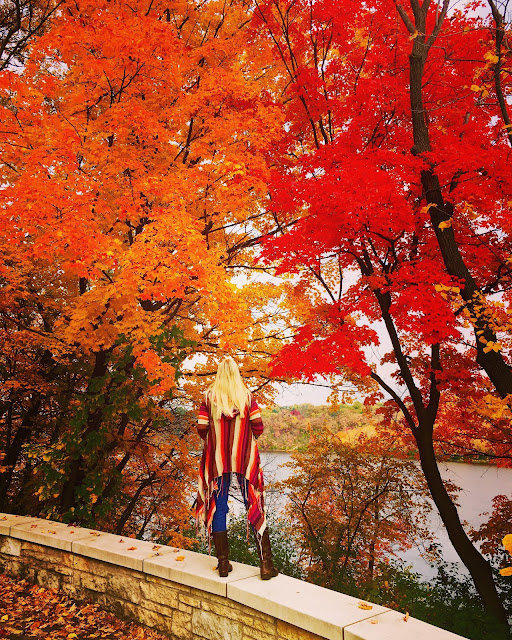 Only one day had inclement weather, and I welcomed it as we haven't had any rain to speak of in California all year. The grey skies over the Mississippi didn't even do much to dampen the brilliant colors and high spirits. One guy was out painting in the rain, and we walked through it all without a care. 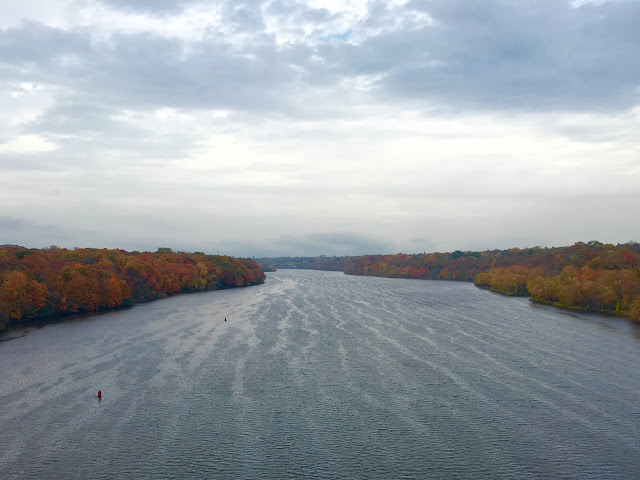 The trees were so pretty in town that I was wondering what it was like up north and down south. One day we did the drive to Lake Pepin (where the Mississippi is so wide they call it a lake, and it's where waterskiing was invented) and Red Wing. The drive was sunny and glorious, but the leaves were just kind of golden ... pretty, but I think too early. 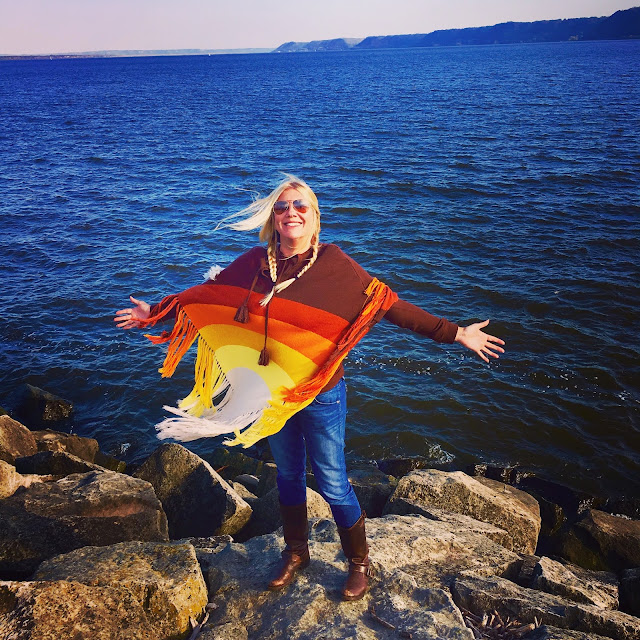 I was looking up the fall color sites every day and one day we decided to just go for it and see what the far North would have to offer. It was a drive well rewarded. 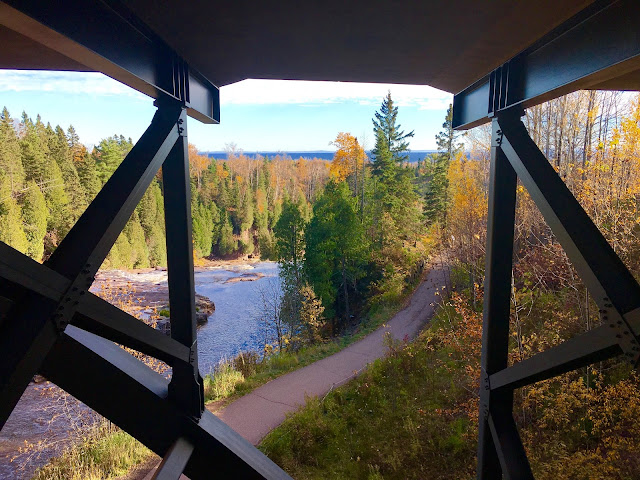 We started out at Gooseberry Falls, where I was so proud of my Mom for climbing up that whole hike. 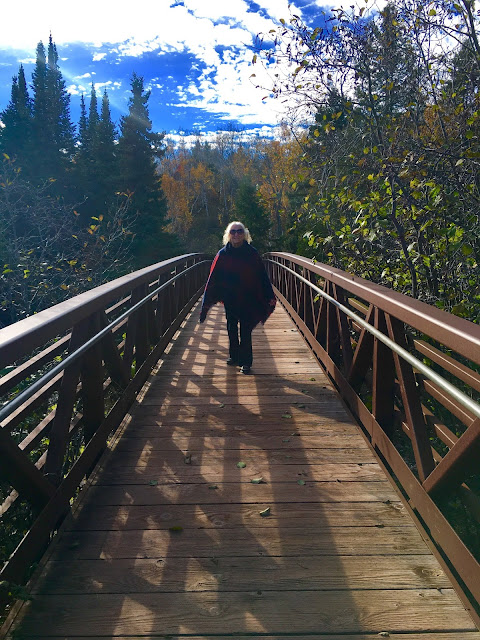 It was postcard perfect everywhere you looked, and the only thing we had to worry about was losing our sunlight and views! 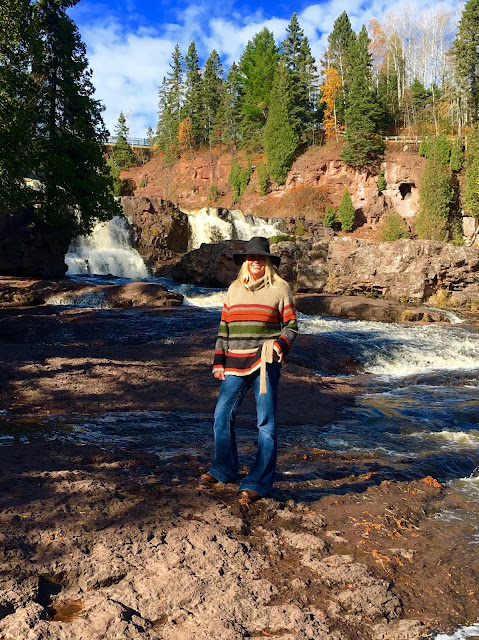 We would take breaks on little benches and sit and just look out at all the wonder. It's such a relief to get out into real nature and recognize that it's still there - and that we have to protect it! 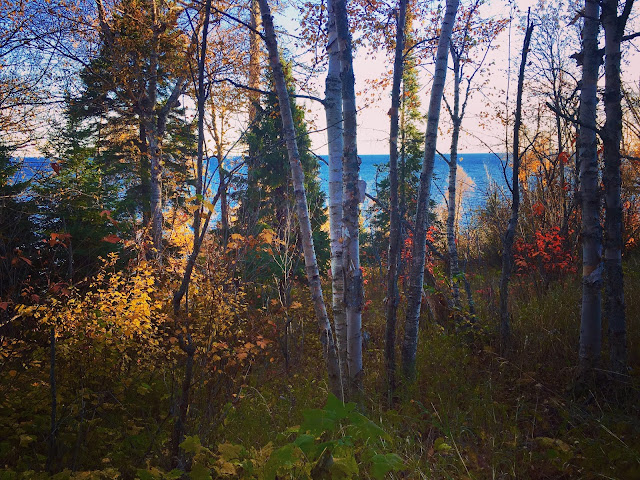 I hadn't seen Split Rock Lighthouse since I was a little kid, and though it's not as big as I remembered, it is as beautiful. 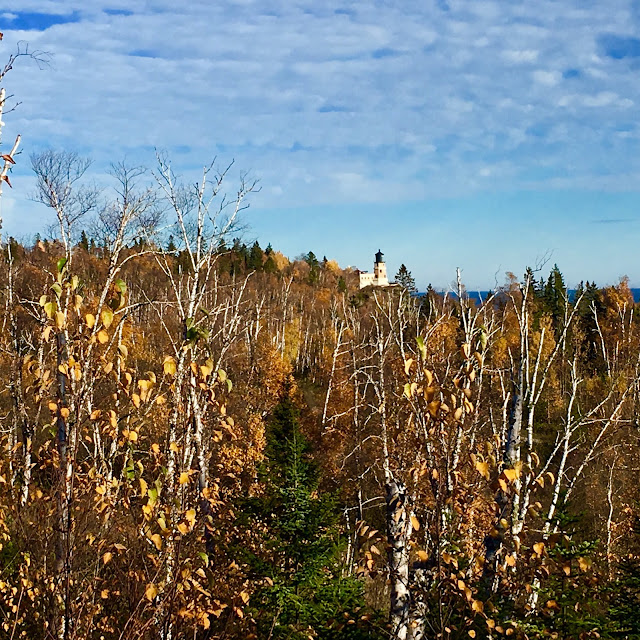 The climb to the top of the lighthouse is rewarded with stunning views of the Lake Superior shoreline, and from there you could really see the oranges and yellow in full flame. 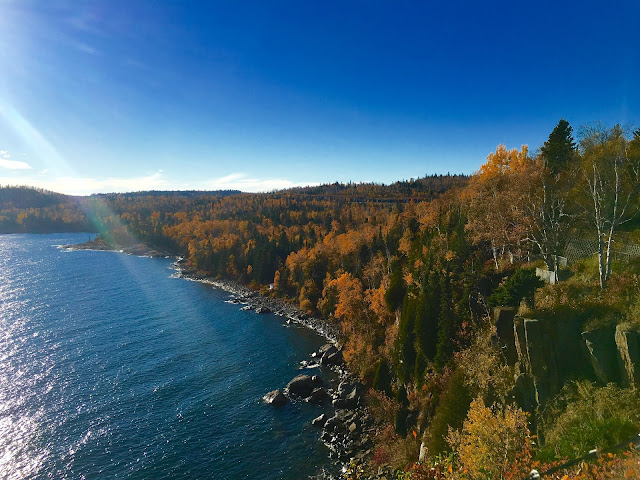 It's so lovely up there that you just want to keep going, certain that around the next corner must be the best view of them all. I got really deep into the woods at one point on my own, and when I yelled back for my Mom, she couldn't hear me. Then I thought I heard a thump and a rustling of leaves very close by, and I took off ... I had seen The Revenant just the night before, so  ... Peace. 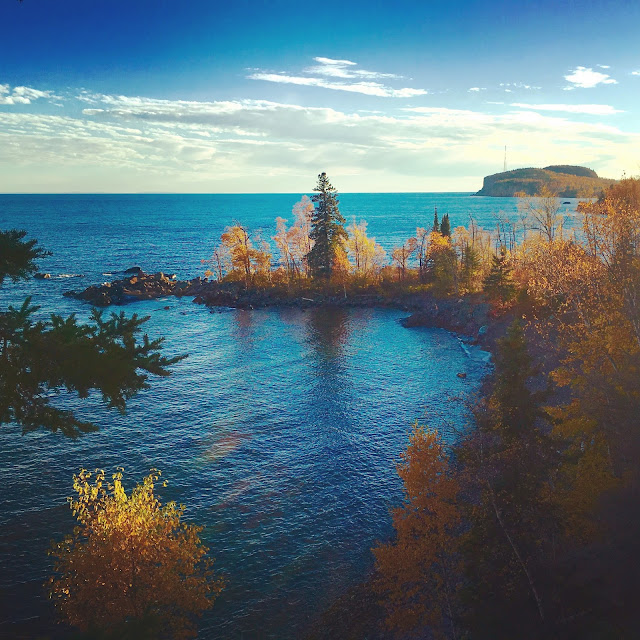 We hiked and sight saw until the last streak of light had left the sky, and then began to look for Northern Lights. They told us they'd seen them all Summer long up there, but on this Autumn night it was just a whole bunch of stars. After a proper Walleye meal, we got back on the road to the city, as there was more to do the next day. 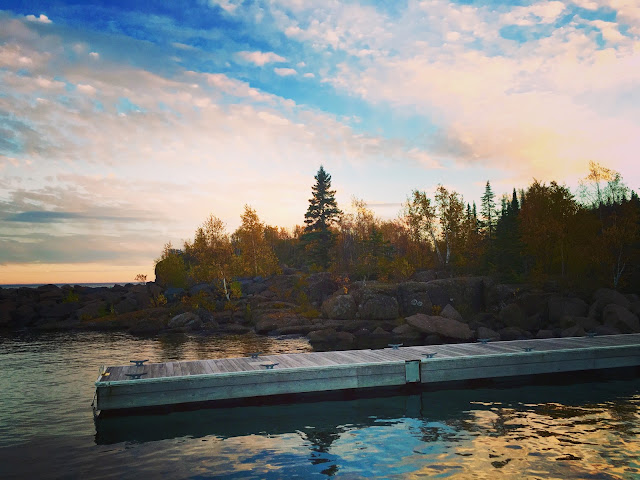 Home is always about my lifelong friends too. I went to the football game at Richfield High School, where I don't think I'd been since I graduated. It's always so great to see the old friends and know that we have those solid roots in common. 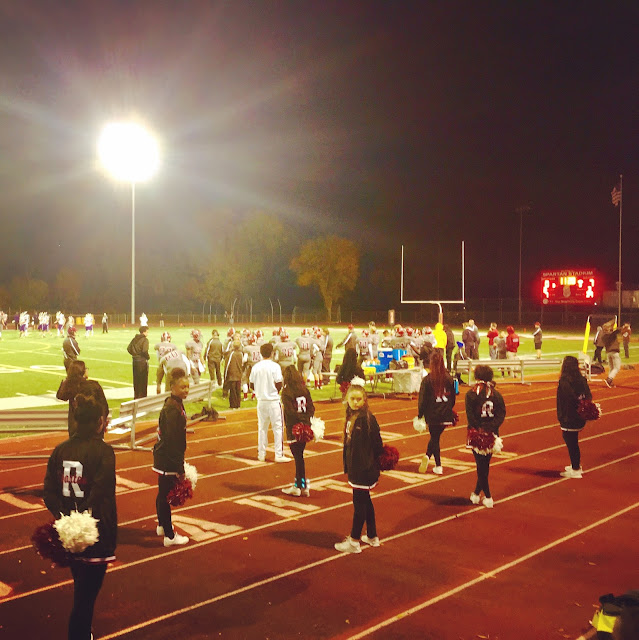 My home friends are solid. I get so much strength from just knowing that they're still out there in the world for me, but when we get to be together (in the Minnesota Wild locker room), it's even better. I'm so lucky. 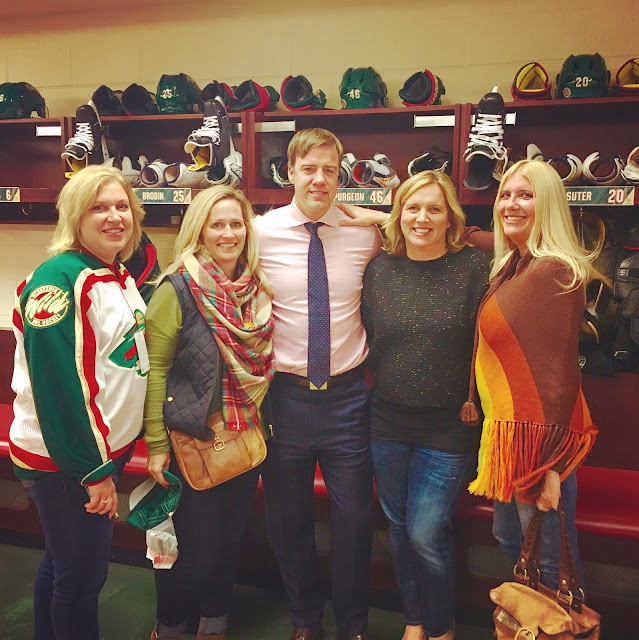 Time flew and before I knew it it was time to return to Venice and real life. I'm sharing a whole bunch of postcards of my time back home here so that you might think about getting out there yourself. It doesn't have to be Minnesota, although you can see why that might be nice. Just get out there and breathe in the fresh air deeply, and know how lucky we are that places like this still exists. And you get to take that with you in your memories, for whenever you need to pull out that feeling again. 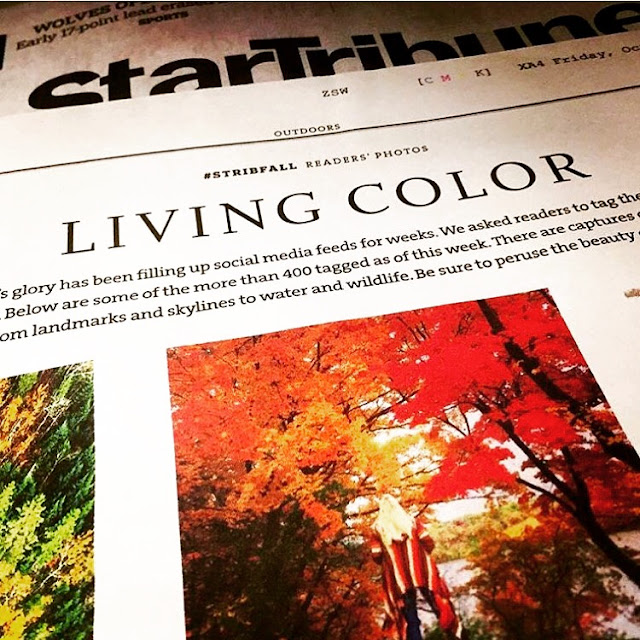 THANK YOU!!! to everyone I saw, and every leaf that turned. I feel all of you now.