There's a (kind of) secret dinner party happening in Venice each month, and it's called Foodshop. Held in a nondescript warehouse, groups of friends and strangers - there by invitation only (and invites can be had by just sending them an email telling them a little about yourself) - sit elbow to elbow, often touching elbows, and feast on that month's five course seasonal menu. 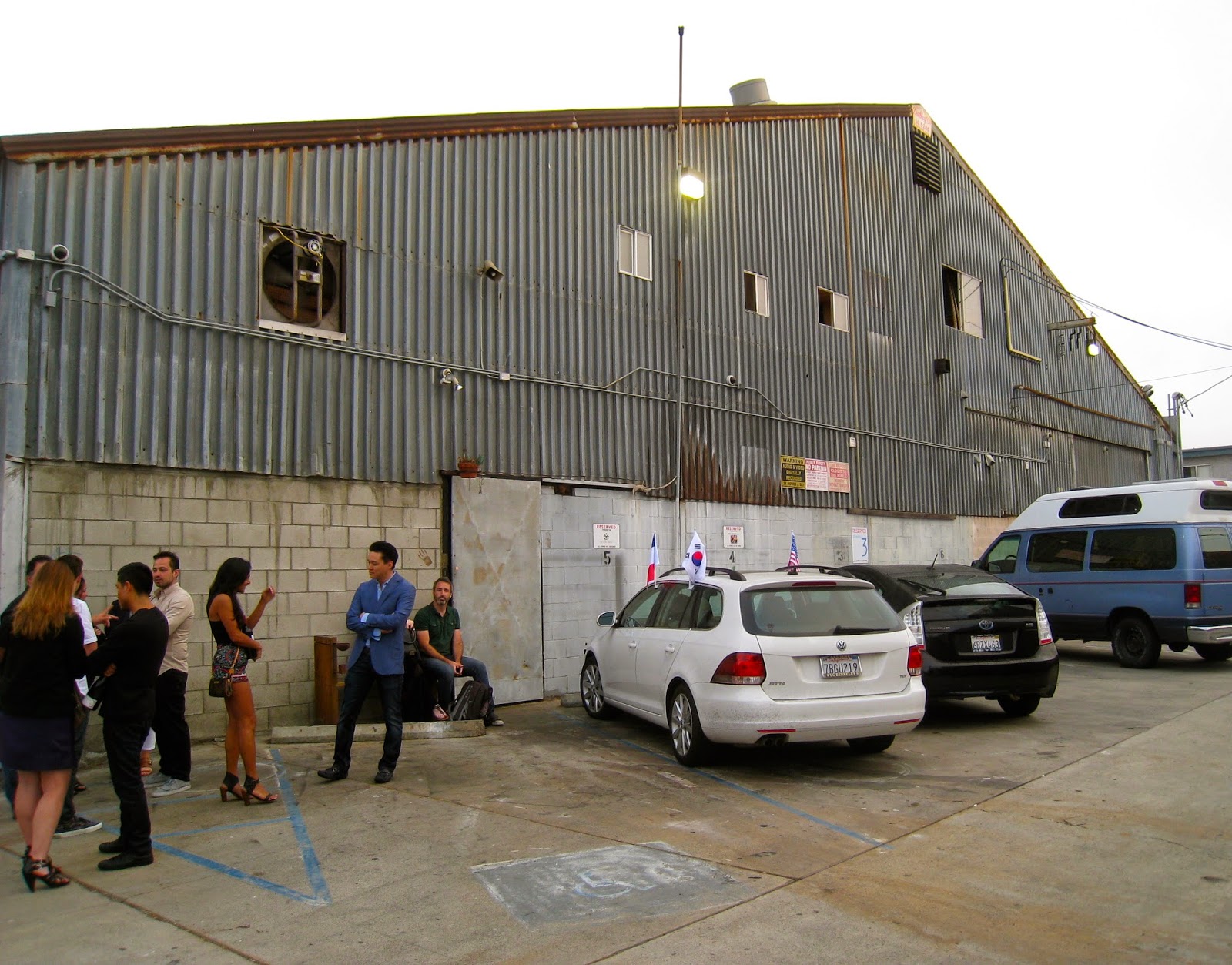 People wait around outside until they're ready to seat you, and one guy drove by and asked if it was an A.A. meeting. It is certainly not. You're greeted at the door with an aperitif, and then your party is shown to seats based on how many you are. After the aperitif (for August it's a mezcal, hibiscus, blood orange concoction that I want again right now), it's all BYOB. It's not rare to find people sharing tastes of their wine bottles or craft beers as they meet the new and interesting people around them. You quickly make friends with your neighbors because it's a tight squeeze in there, as about forty people are seated around the long table, in the middle of what I think is someone's wood shop/tool shed when not being used to feed L.A.'s serious foodies. Nothing matches, adding to the charm, and reflecting the guests too, in a way, as all types of folks have caught on. You never know who you'll be dining with. 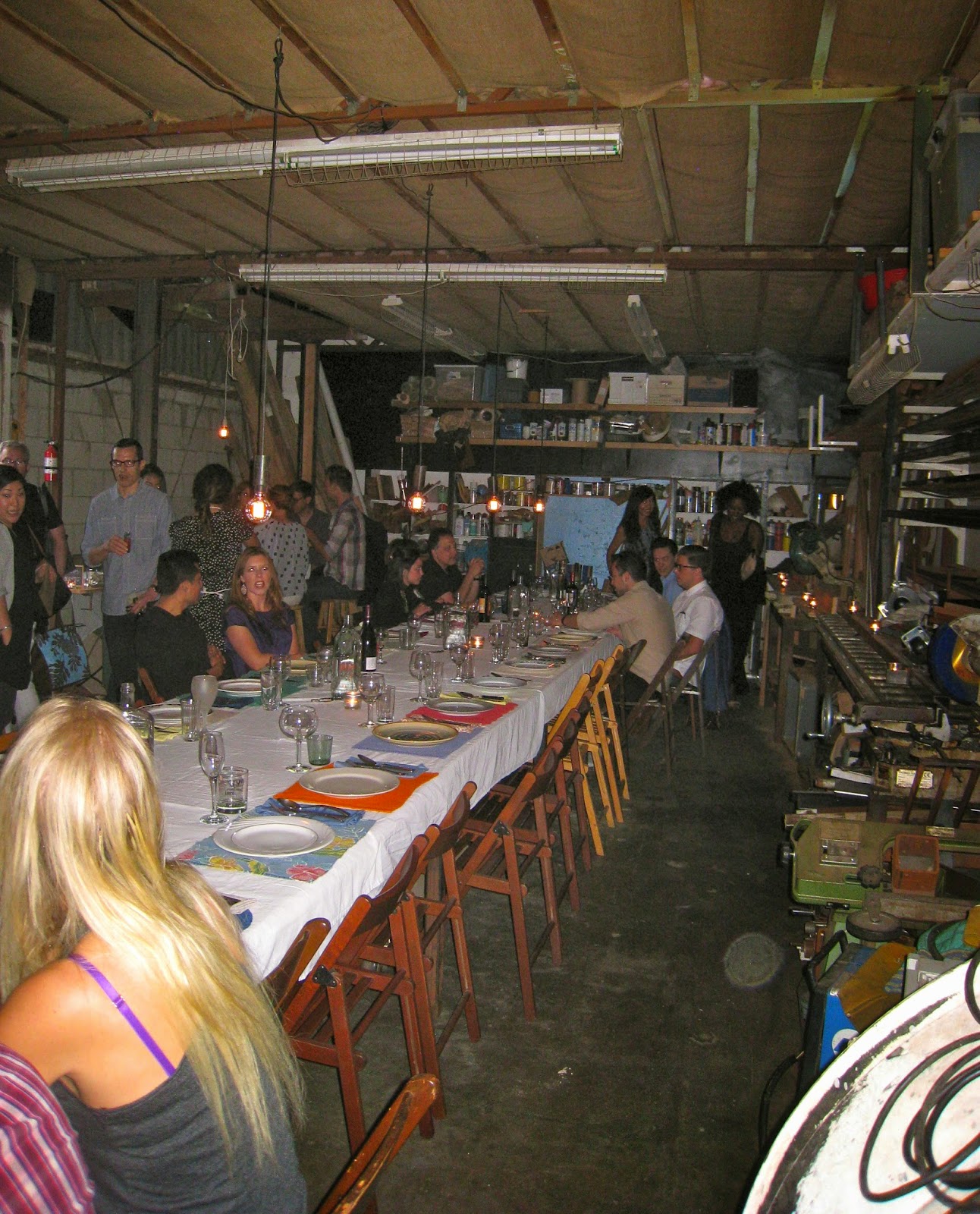 It feels fun from the moment you walk in the sliding door, and you smell your dinner cooking from the tiny kitchen in the back. I've been twice now, and the food is fantastic. Prepared by Chefs Hyejin Cho and Itay Zach (and their helpers), it is a thoughtful menu, always designed to feature ingredients from the current season. In June we tore through the corn soup, grilled peach salad, Moroccan meatballs, shrimp-n-grits, and a delicious summer berry tart. DEE-lish. And all served family style, so you really get to know your neighbors as you hold platters and serve for each other. 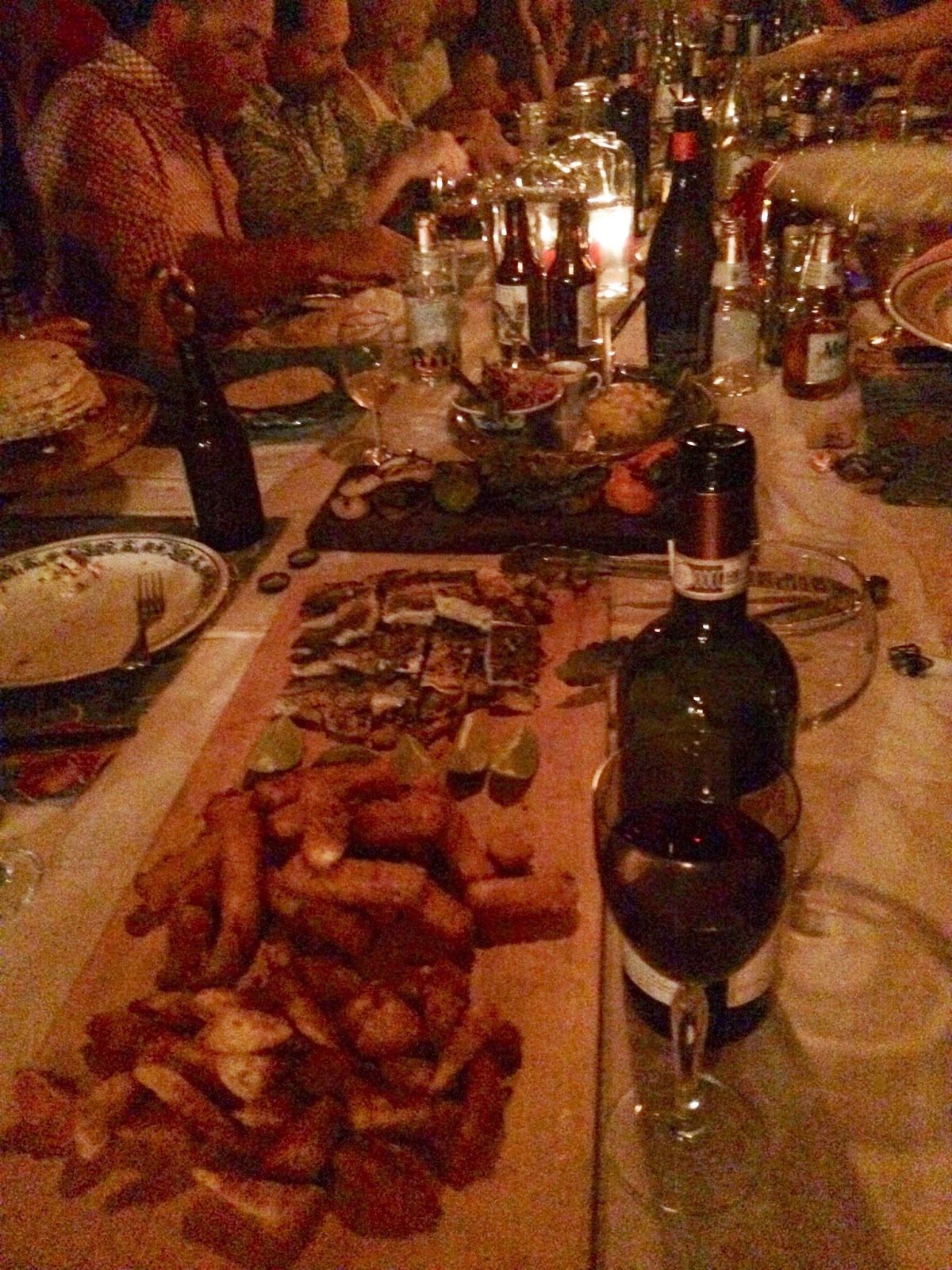 As good, if not better, than the food is the fellowship. The friends you're with soon become friends with the people on their side, then you do on your side, and pretty soon the whole room is having a blast, talking and laughing so much that each new course is almost an interruption. Which is a good thing, because it's pretty Euro in as far as how long it takes for this meal ... it is not fast. You probably shouldn't make too many after-dinner plans, because you will be late. And stuffed. 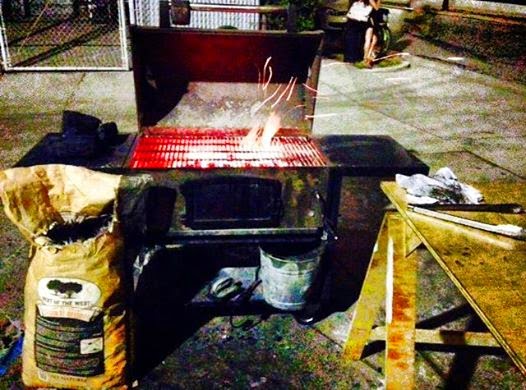 August's menu featured the above-mentioned mezcal delight when we arrived, and the parade of food that followed was a summery array of plaintain cakes, a great calamari/corn salad, watermelon gazpacho (that could have been way more chilled and strained, we left ours almost untouched, sadly), fried yucca, fish tacos (that you could see the sparks flying from as they grilled right outside the door), and a sinfully delectable dessert of homemade churros and a spicy chocolate sauce. SO good. 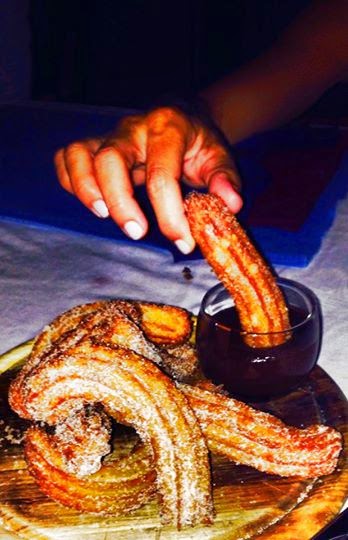 There is a "suggested donation" of $70, which might seem a bit steep for fish tacos and no bar, but it's about the experience, and it's a fun one. I first heard about it in Vanity Fair, where a designer I forget mentioned that it was her favorite restaurant. In Venice. And I'd never heard of it. Then my east side living friends invited me one month, and I couldn't believe I was hearing about it from them, when it's in my own backyard. It's pretty underground, and you can't find much info other than their website on the internet ... which it makes it kind of cooler. 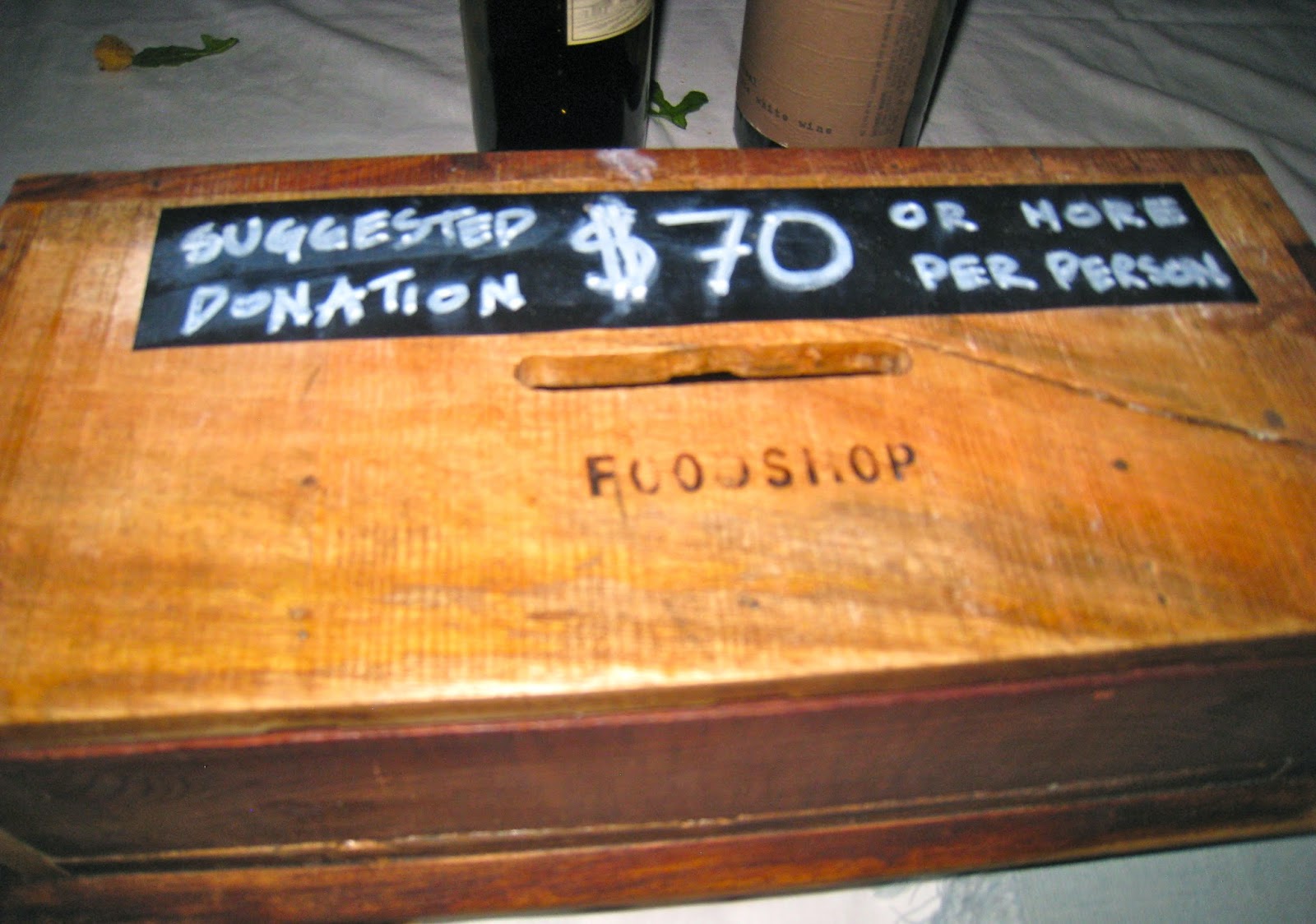 Lives were caught up on, jokes were told, cards were exchanged, a wine buzz was achieved, and as we emerged back out into the moon-lit Venice night, you had that feeling of being in on something special. Something created by and for friends, and grown into something food lovers all over town ravenously look forward to each month. 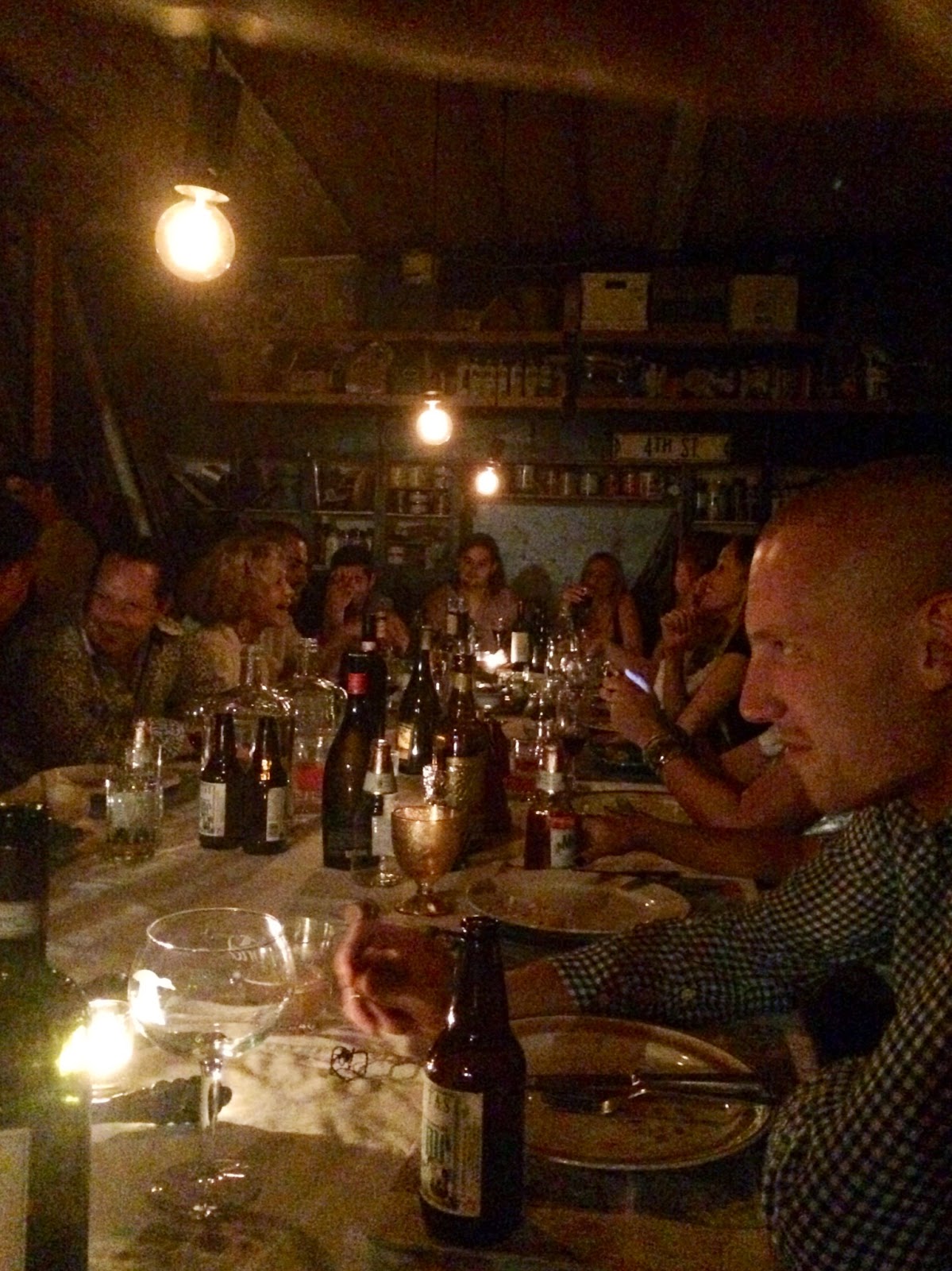 I'll hope to rub elbows and break bread with you there soon, and as Cho and Zach sign off on their invitation each month ... Peas and Love.