Jane's Addiction Gets A Star On The Hollywood Walk Of Fame!

Jane's Addiction received their star on the Hollywood Walk Of Fame yesterday on a beautiful sunshiny day that bore nothing in common with the "dark, mysterious, dangerous, edgy" band that was being honored. Fans crowded in all along the sidewalk in front of the Playmates store on Hollywood Boulevard, where the Jane's star is now located. 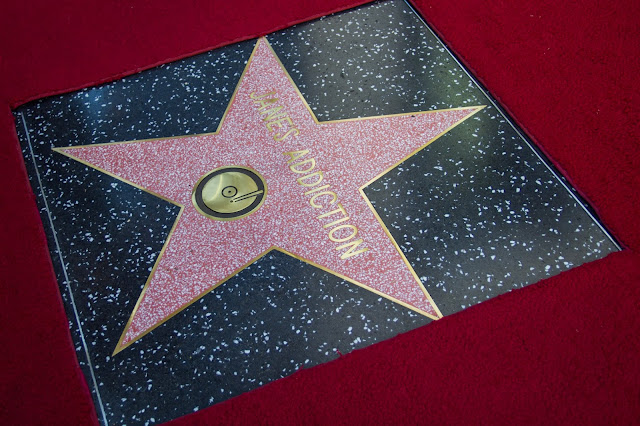 It was an extra-special day for a band that pioneered alternative rock, and are iconic in so many ways. Led by one of the all-time greatest front men (and super great friend and person), Perry Farrell, Jane's Addiction will always be one of my all-time favorite bands, and I was so very happy to get to be there to witness such an important and well-deserved day for these guys. 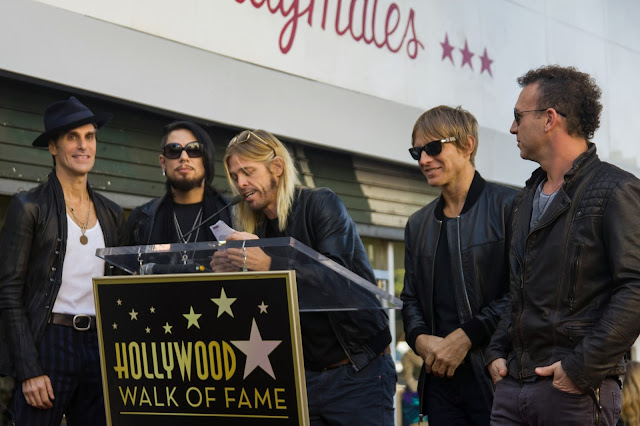 After a long introduction from the guy that took over for Johnny Grant about the history of Jane's, and getting the crowd hyped by mentioning favorite songs and all the other killer bands that were influenced by Jane's, the band took the stage to massive cheers. Perry, Dave Navarro, Stephen Perkins and Chris Chaney were all smiling ear to ear, and it was clear that this was a big deal for them too. Taylor Hawkins from the Foo Fighters took the dais to give the first speech. He spoke about how the "nursery rhymes on acid sung by this guy with green dreadlocks," caught his attention when he was coming up in bands. They all joked around with each other for a bit, before Hawkins said, "In the immortal words of Perry Farrell, 'Thank you, Boys!" 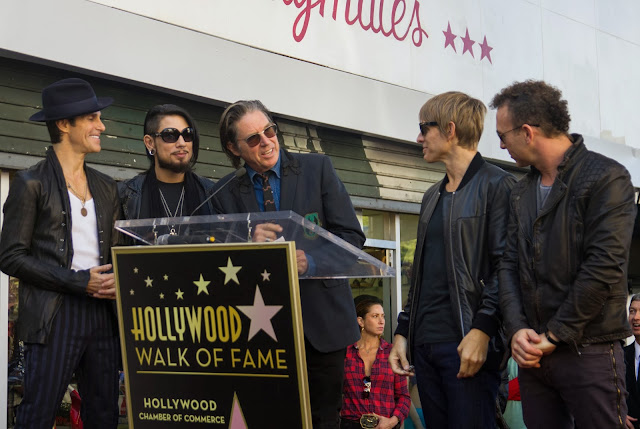 John Doe from the seminal Los Angeles band X was up next, and he said, "In 1991, nobody would have thought that these guys would be getting a star on the Walk of Fame, no fucking way. They were dangerous and scary and shone a light on the underbelly of L.A." He went on to talk about how they went on to create festivals (Lollapalooza!) and make classic music for the ages, before looking at them and saying, "What else can you say?" To which a fan in the crowd yelled out, "RIGHT ON!" Right on. 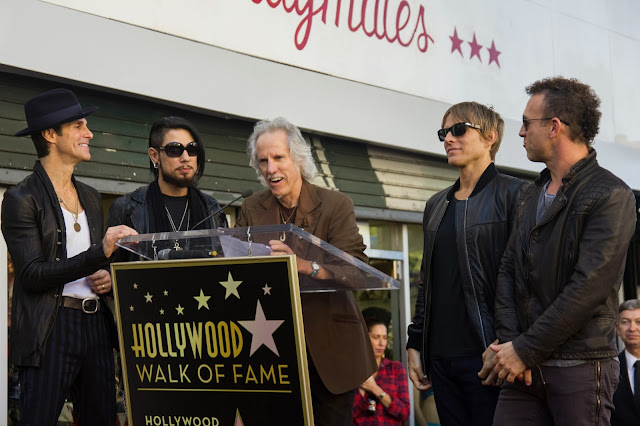 The Doors were another band closely associated with Los Angeles, and Doors drummer, John Densmore began his induction speech by saying, "When the Doors started out ..." and Farrell interrupted him, saying, "No, this is about Jane's Addiction," getting a big laugh. But when The Doors did start out, he said, "There was no word 'Rockstar' in the vocabulary, not even an energy drink. We were an alternative band before our time," going on to explain that Jane's Addiction was an alternative band for ALL time, as they conjured up images of "Dark, mysterious opium dens". Densmore introduced each member of the band, saving Perkins for last, "And the most important member of the band - the drummer!," which got laughs and arms thrust in the air from Perkins. He closed by saying, "I hope to be the first person to step on your star!" 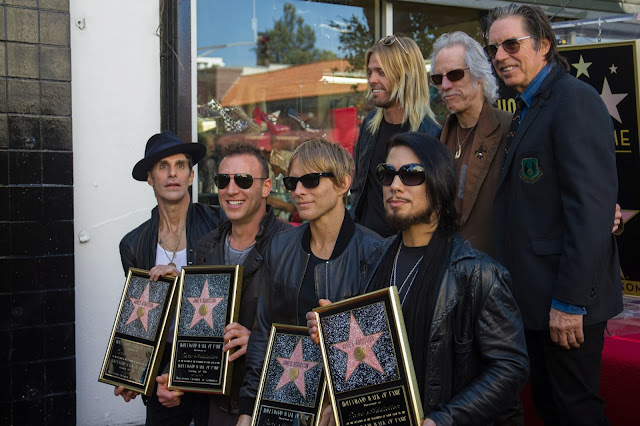 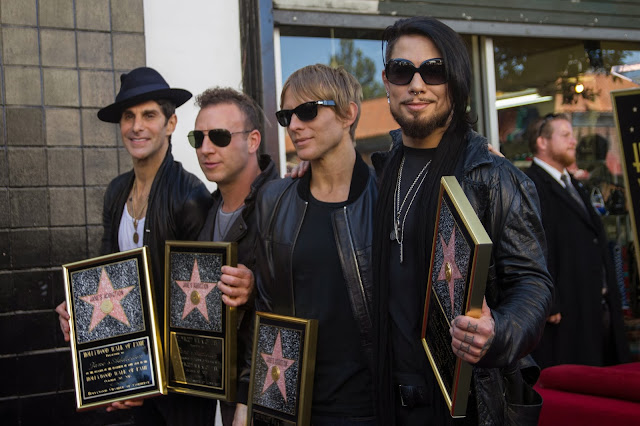 Dave Navarro said he was "thrilled that this day is here, and that my Dad, Mike Navarro is here ... We were part of the dark subculture that Hollywood is, and I never imagined I'd be part of this legacy ... I want to thank these three guys. We're a family, a brotherhood." He earned laughs when he said, "I can't think of a better spot for our star than in front of the Playmates store ... I may have had something to do with that." 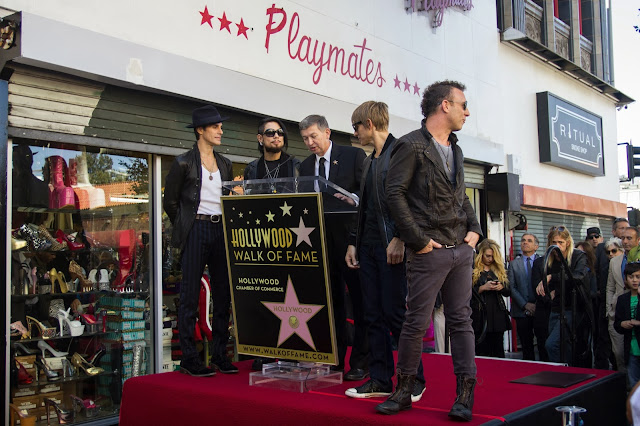 Chris Chaney spoke of how the other guys were not only his teachers, but his family and friends. "These guys have the biggest hearts of anyone I know, and I'm so blessed to be a part of it." In a classy move, he said that it was intimidating to come in as the bass player after Eric Avery had created and played on three epic albums, "But I hope I've honored Eric's legacy." He has. (That was the only mention of original bassist, Avery, who has been estranged from the band for a some time.) 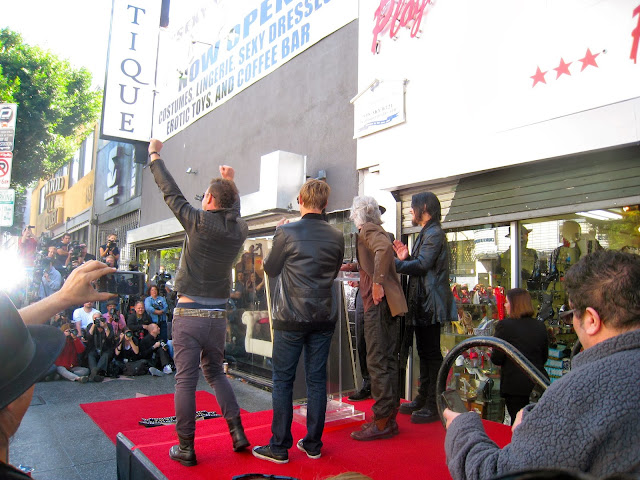 Stephen Perkins thanked Perry "for his music, his lyrics, his balls," which Perry replied with "You're welcome from my balls." Perkins thanked his parents for "Drum lessons every Tuesday," and said he couldn't wait to come back with his little boy next week and "look at this star and the girls with him," as girls were strutting around in the sexy costume store while all this was going on. "I REALLY love Jane's Addiction!" he said as he gathered the other guys in a group hug. It was a truly touching and sweet moment seeing them all, arms around each other, heads bowed together, soaking up all the past into the present monumental moment. 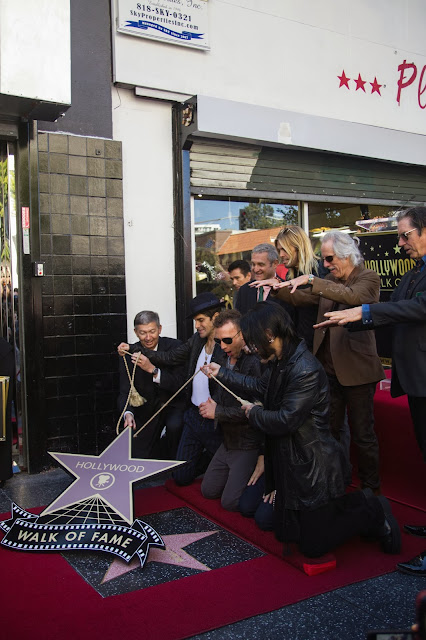 Farrell spoke last, and was his usual entertaining self. He pointed out the brick building across the street, saying they used to live on pizza from there. "We used to walk these streets and imagine that we were famous and great," never picturing a day like this. "Can I go on for a bit?," he asked, and the whole crowd agreed he could. He told stories about the Hollywood characters that they hung out with and influenced their music, like "Johnny Shades" and "Reuben Blue" who did the "Rock City News". He told how "music was so happening back then, with GNR and the Chili Peppers all cranking as you'd walk down the streets. I appreciated how he shared stories about real people like that, and wasn't all about all the famous people he could thank and go on about, further cementing the fact that Jane's Addiction is about REAL Los Angeles, through and through. 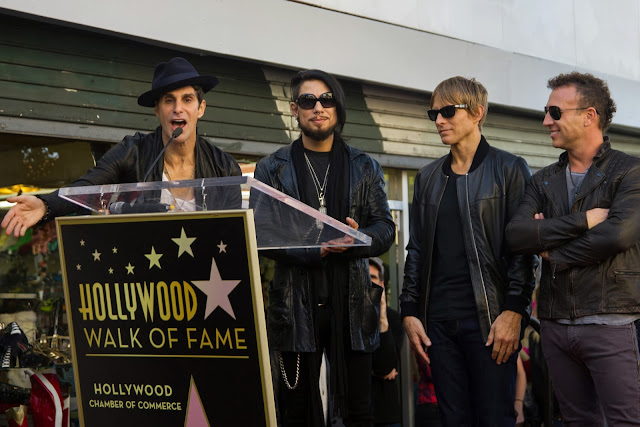 "We make these songs for all of you. These songs and stories came RIGHT off the streets of Hollywood. I accept this on behalf of the denizens of these streets, and I'm so happy to see some of you are still alive! Thank you!" There was wild applause from everyone gathered, and then it was time to unveil the star. 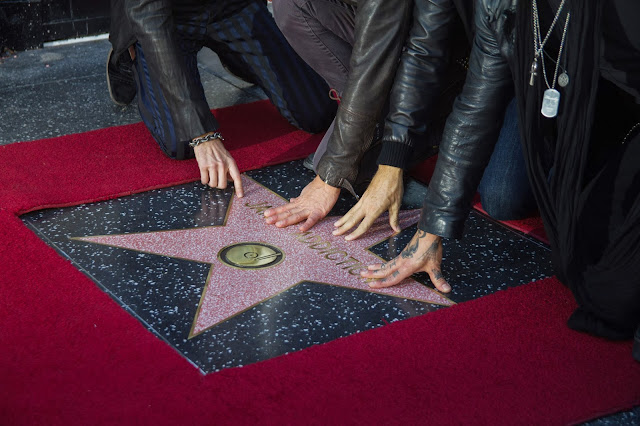 Photographers went wild snapping shots of the shiny new star and the beaming band surrounding it. It really was a thrill to behold, seeing a truly original, ferociously talented and ground breaking band get their due credit. The screaming fans fully agreed with that, as they strained on tiptoe to see it all go down. 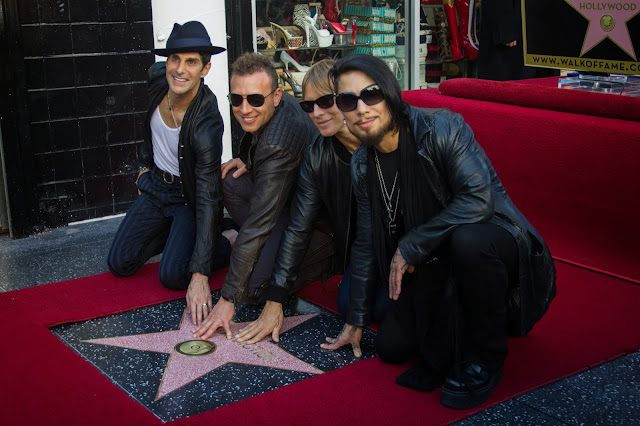 Perry's wife, Etty, and sons, Izzadore and Hezron had a family photo, and I have a good feeling these young men will do a great job at carrying on the family business. 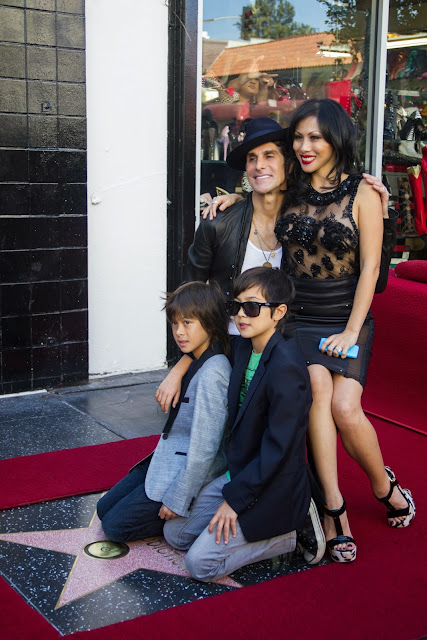 Once the official photos were done, the guys in the band went around signing autographs on posters, cds, vinyl, photos, and all the things that people thrust out for them to sign, happily. It was a happy day all around, in fact. You could feel it in the air. 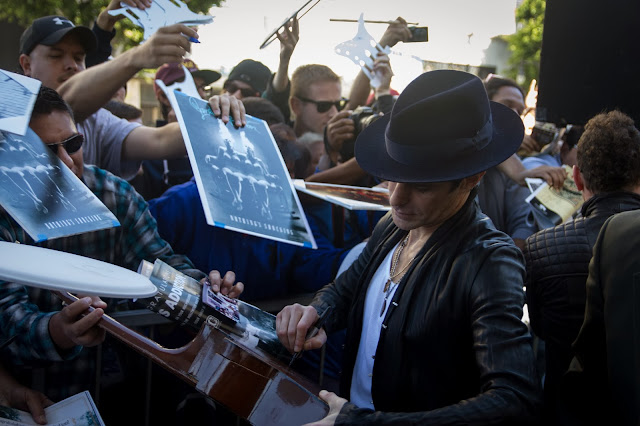 We all trooped over to a hidden, dark, downstairs bar (fittingly) called Dirty Laundry, where toasts were made and a whole bunch of fun was had congratulating the band in a great post-induction reception. Then it was off to the Roosevelt Hotel to continue carrying on until it was time for Jane's Addiction to PLAY for the fans, on the Jimmy Kimmel Live show right up the street. 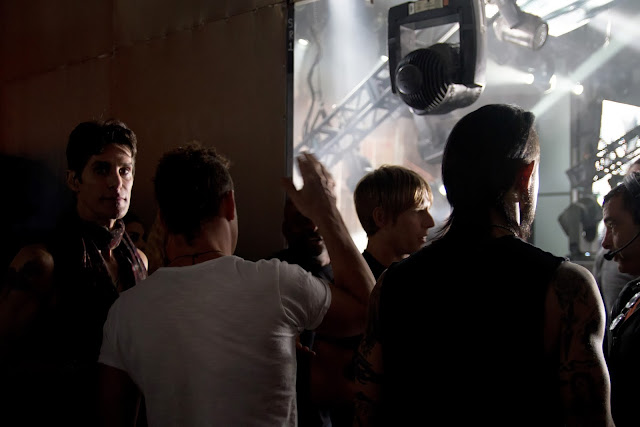 The crowd was PACKED in at the outdoor stage, and as soon as the first note was played, it was all the more evident why this day happened for Jane's Addiction. They got down to what they do best, and played with a joy and a ferocity that showed they were extra meaning it, and fan favorite "Stop" blew the place up. 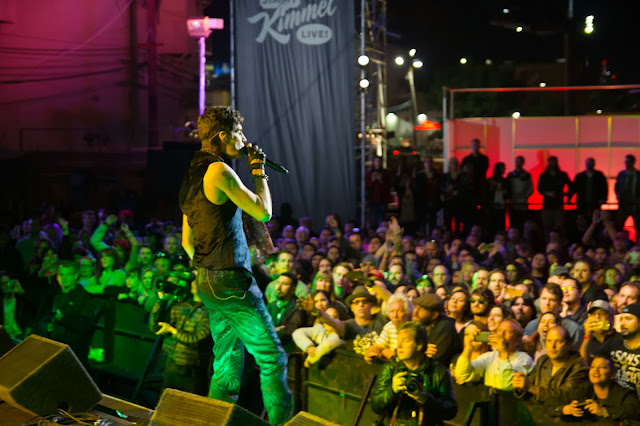 "Another Soulmate" off their most recent, and fantastic, album The Great Escape Artist showcased how they're as fresh and awesome as they ever were ... and I gush because I love. So there. 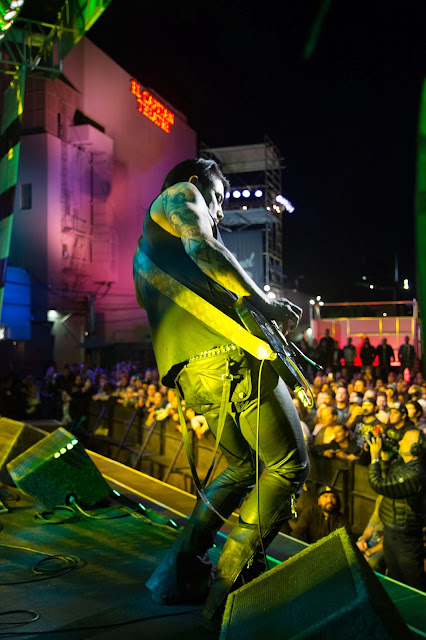 Showing off just why Jane's Addiction has always been thought of as "Mysterious, dark, dangerous, etc..." they tore apart the epic "Three Days". Girls flew above, suspended from skewers in their backs, lending an even more ominous, hardcore tone. Yikes. 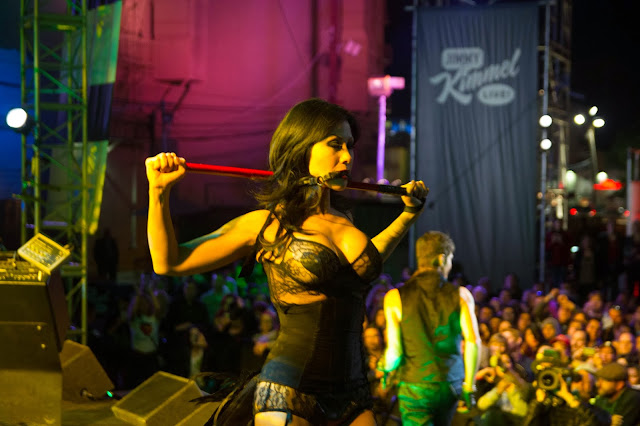 Etty Farrell danced around her husband, and together they heated up the entire audience.

It's all just SO good. 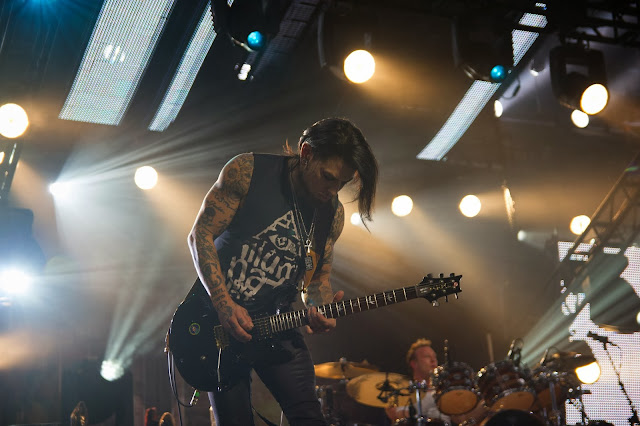 Everyone loves their "Ocean Size", and this time was no different. MONSTROUS. HUGE. The band was clearly having as much fun playing as the crowd was rocking, as they were all smiles and animated. 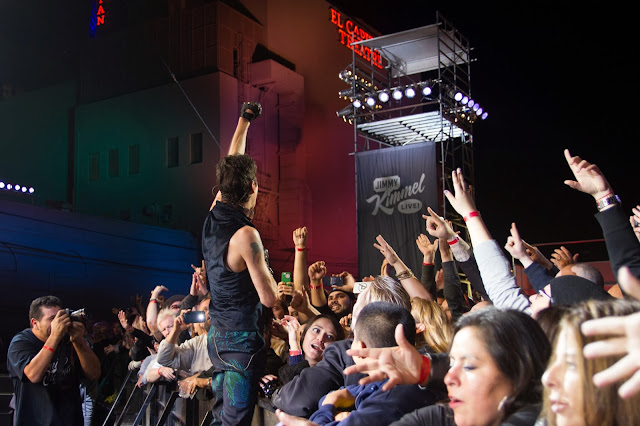 Perry was in rare form, bounding from one side of the stage to the next, dancing and howling in his inimitable vocal style. You could tell it had been a really good day. 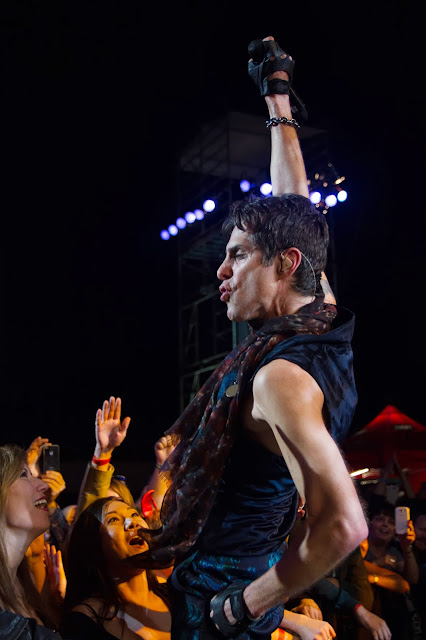 It certainly had. As Jane's Addiction took their bows, it was time for more celebration in the Jimmy Kimmel Green Room. Too much fun. What a day!! Hugs and good nights were exchanged all around and it's a pretty safe bet everyone involved fell asleep with a smile on their face. 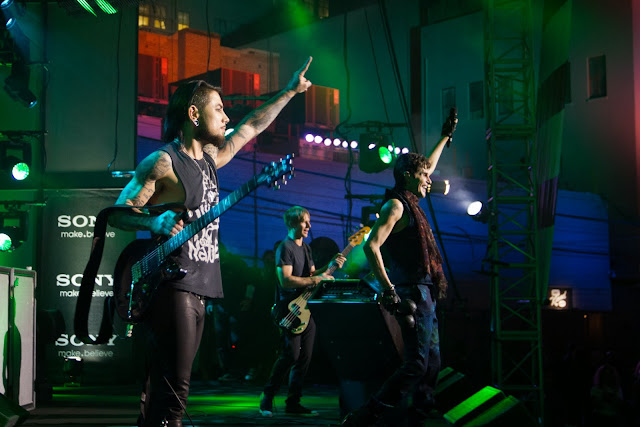 Sincere, heartfelt CONGRATULATIONS to Juana's Addicion!! Thank you for the music, then, now and always. Thank you, Boys!!!