The 2013 Venice Home and Garden Tour lucked out and got one of the most gorgeous days ever to strut its stuff. This was the 20th Anniversary of the day that for many is a highlight of the entire year, and this year's tour focused on the Abbot Kinney (and adjacent) to celebrate. 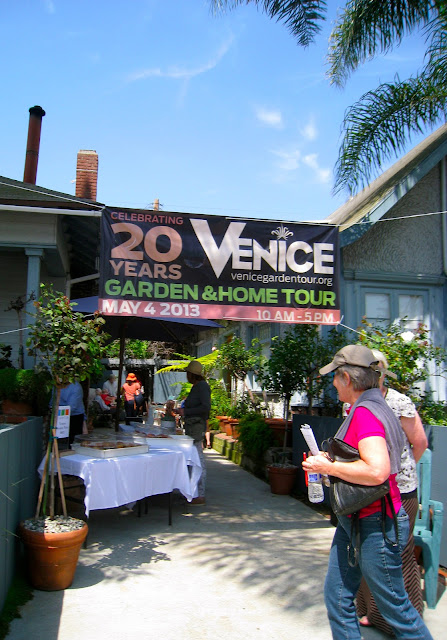 There were only a few stops actually ON Abbot Kinney, but they were pretty cool. One house had a bamboo garden in back that was so serene and calming (due to the "water features") that you would never know all the AKB hubbub was going on right on the other side of the house. A real retreat.

There's always a lot of ground to cover on Garden Tour day, so you gotta move if you want to see it all. It's also wise to ride your bikes, way speedier and stealthier. I can't imagine driving from place to place, you'd waste half your time looking for parking. Some stops were way over on Vernon and others way over on Rialto, so you hoped the folks wore their comfy shoes too.

A cool thing about the Tour is that many of these places you fly by all the time, having no idea that these wonder spaces exist within. One sort of regular looking house on the outside might have an absolute dream garden behind it, and you'd never know from going by it every day. Unless you make friends with them - the best idea - or have that green Tour wristband once a year.

The highest rated green LEED house on Brooks was impressive in its use of recycled water with a mill wheel and gutter system going on, and lush vegetation all over. It drew crowds. 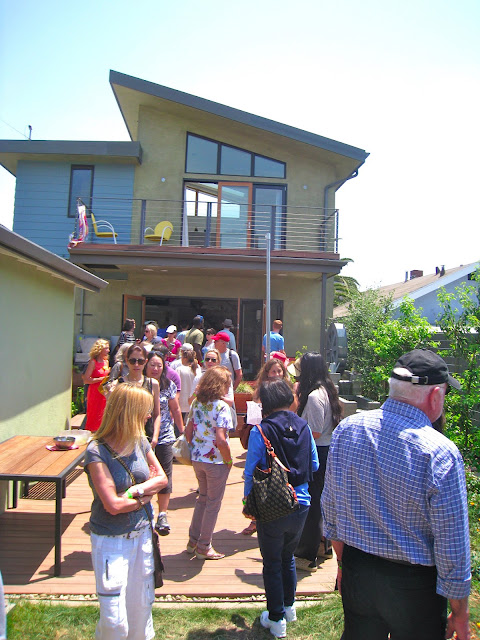 The rooftops were often as dramatic as the gardens below, and showed how to be very green -living again. 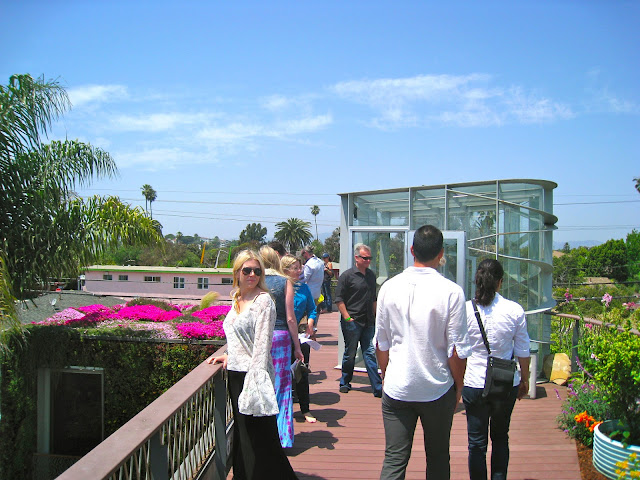 One house/artists' studio was right next door to where I just lived for a year. I never knew all this creation went on inside those walls. I'd almost never seen the owners, save for a quick "Good morning," as we came or went sometimes. Cool place, guys! Good art! 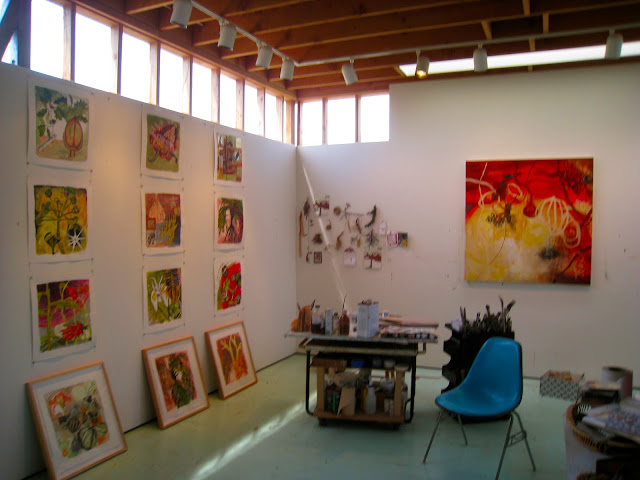 I liked that the Venice Heritage Museum had place markers along the Tour route, so that you could understand a little bit about the place you were traipsing around, if you were a new visitor, or a local that doesn't get out much. I was happy to see one honoring my friend, Bobby Brown. He would have loved this, saying he was "Jam packed and jelly tight!" (Whatever that meant). RIP, Friend. 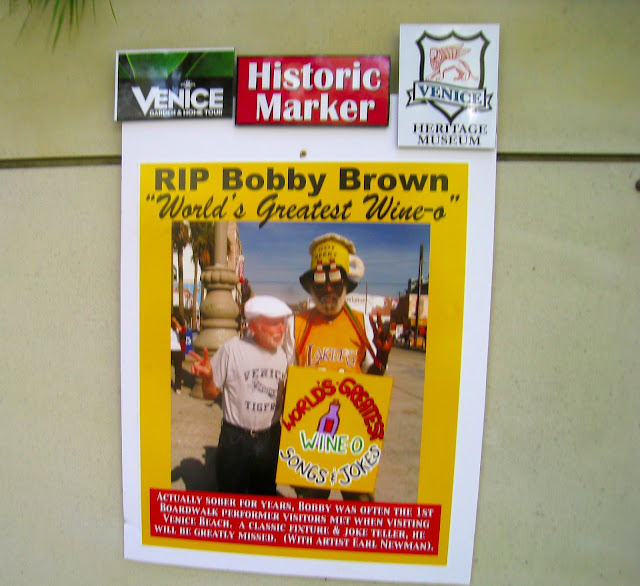 I'm just touching on my favorites, because otherwise this would be five years long to read, and you should maintain your own sense of wonder until you get to discover some of these places for yourselves. I had a nice moment with a couple of strangers - to where I said, "I'm glad we had this moment" and they said, "Me too" - when the sun shone in just perfectly on us in this little hot tub nook in a gorgeous orange-hued cottage on Altair, and it was so beautiful when we all looked up, away from the throngs of people queuing through the homes, that it prompted that grateful, acknowledged moment. Sweet. 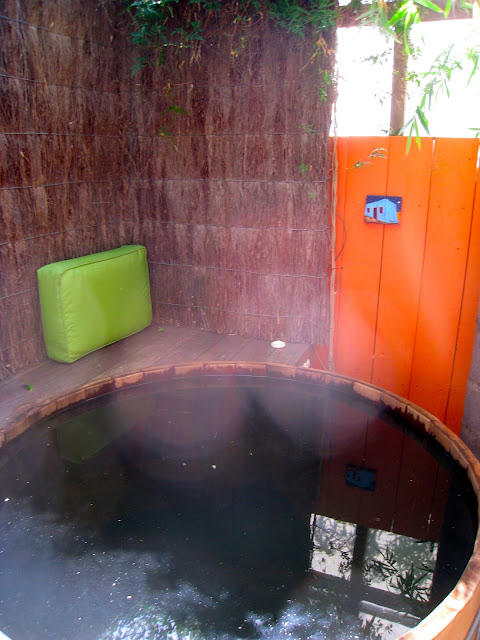 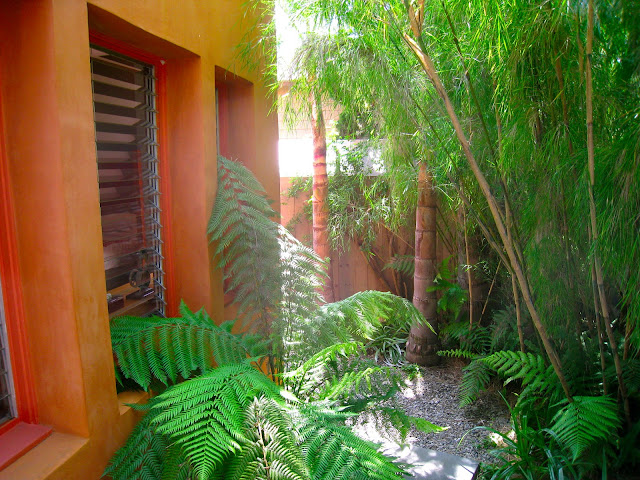 There is a lot to look at over at Robin's Sculpture Garden, back on Abbot Kinney. There were photos and projects and camel topiary prototypes and mosaics and a spinning fortune wheel and all sorts of good stuff. Robin Murez told me how she'd recently been arrested for painting little waves on the streets that used to be canals around Venice. Arrested?! Yes, art is a crime still sometimes here. In this case, a felony. Dumb. I need to hear more, but we had an important engagement to get to ... called watching The Kentucky Derby. 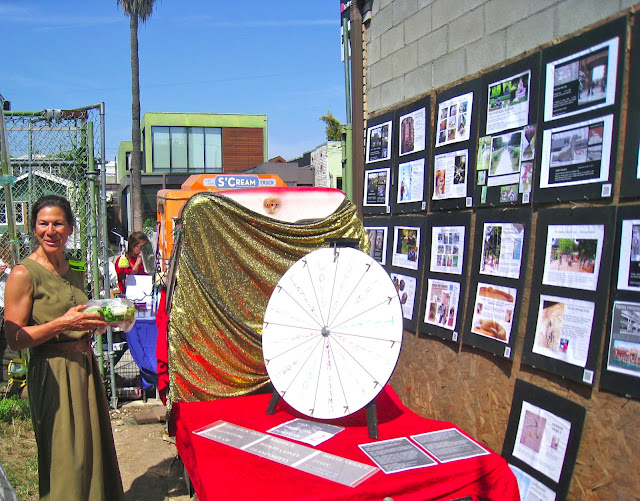 "The most exciting two minutes in sports" always happens the same day as the Garden Tour, so the tradition tends to be stopping in at Hal's for a respite (Mint Julep, of course) in the middle of the Tour to watch the race. Someone at NBC must have been fired this year as there were no graphics on the screen down the home stretch, and in the loud bar, no one had any idea who won. National Buzzkill. 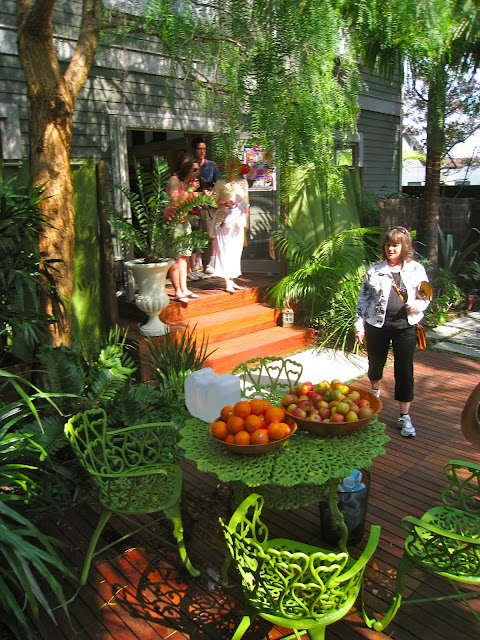 The Tour must go on, and after visiting a few cold and sterile bachelor-looking pads/boxes, we were treated to what wound up being my absolute favorites. Again, just cruising down Rialto, you would have no idea that behind the astro-turf looking fence walls would be a lush, resort-like paradise of a backyard. 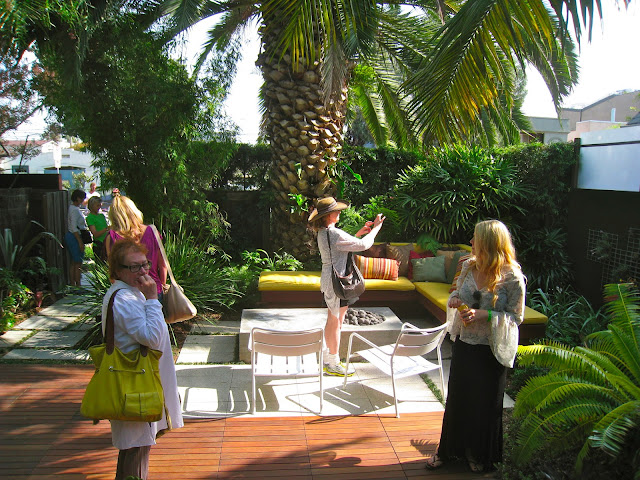 You just wanted to sit here and relax all day ... and I could have, because my dear and darling friends, Harry and Russ, live here! Their place is so great, a renovated four-plex Craftsman that Russ surrounded with his own epic landscape work (Russ Cletta Design Studio). 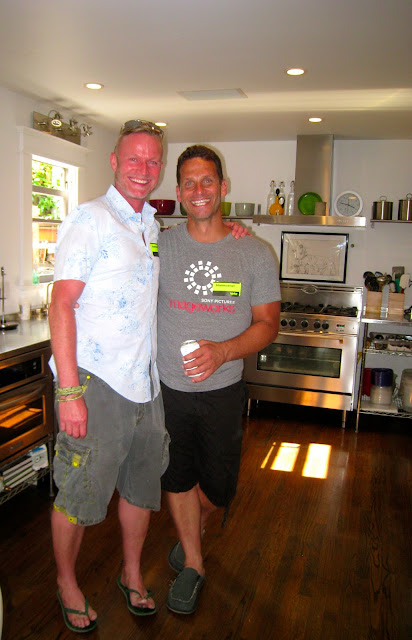 We had some good laughs/Modelos here, (A lady who lunches type told Harry that she could tell it was a man's kitchen. He said, "Well, a gay man's, so I guess it's for both." I'm still laughing. With her.) and then zipped off to try and beat the clock to cram in as much as we could. 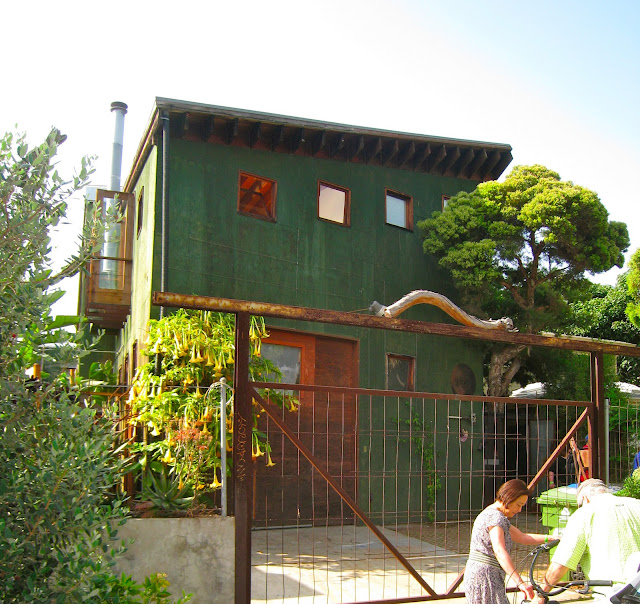 I think Harry and Russ's place was tied for my favorite with the one on Santa Clara listed as "Quirky Venice." It's so beautiful, with interesting things to look at at every turn. Artist Simon Maltby designed his own home and studio, and the creativity is everywhere, both in function and beauty. Like his swinging fireplace! 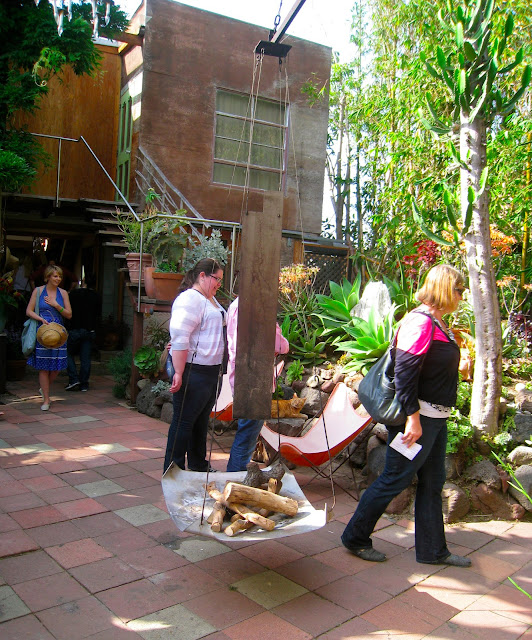 I love this place for its color and art and total uniqueness. It's all very airy and open, with a courtyard between front and back structures. 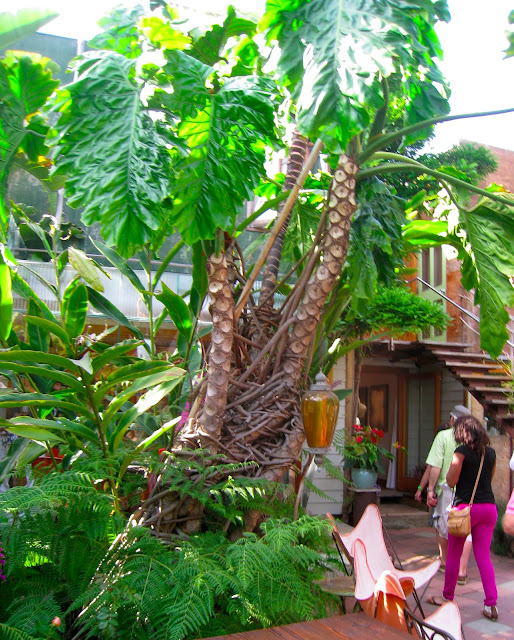 A sun room must be so pleasant to have breakfast in, with the plants under the glass floor at your very feet. 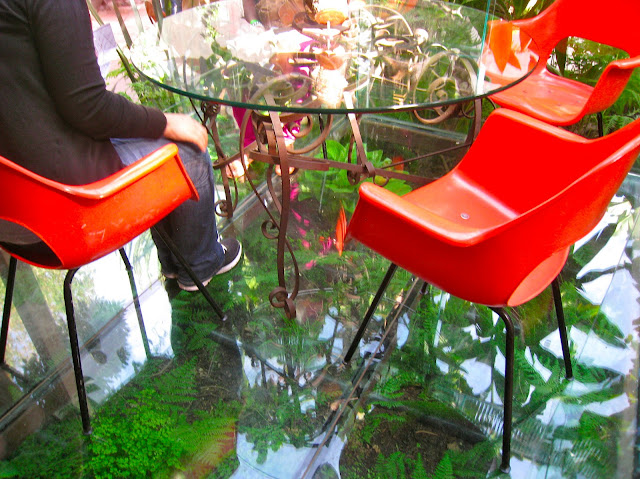 A door had palm leaves embedded in its panes of glass, making the whole place feel organic to and in its surroundings. 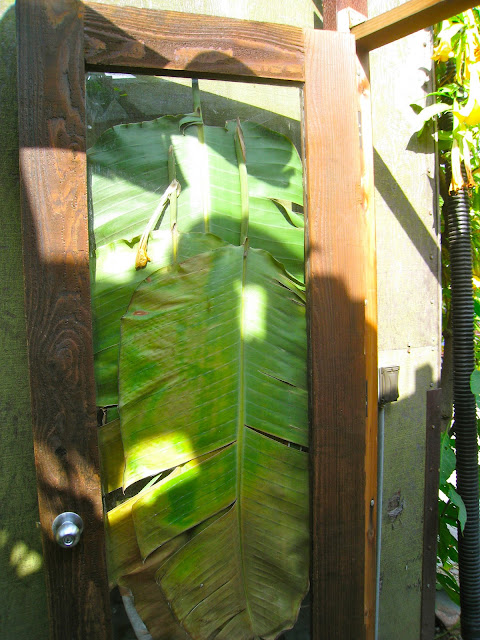 Inside the house, it was ultra-cinematic, with a hacienda feel that was both homey and deluxe at once. Of all the places we'd seen that day, this was the one I'd most want to actually LIVE in. 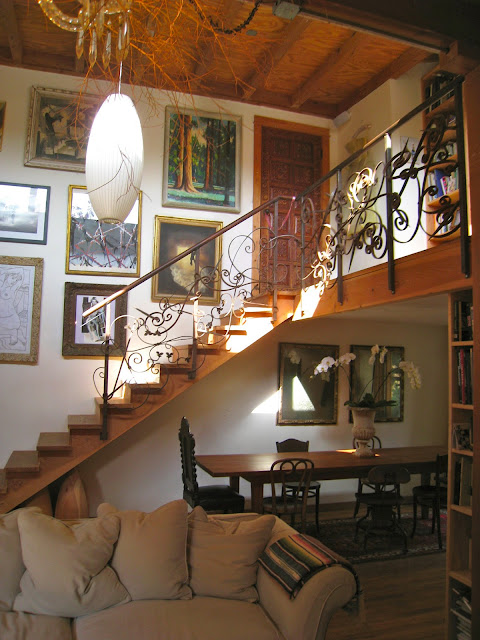 Maltby was kept very busy answering the many questions the Garden tourists had, as most, I'm sure, had never seen anything else like it. A true highlight. 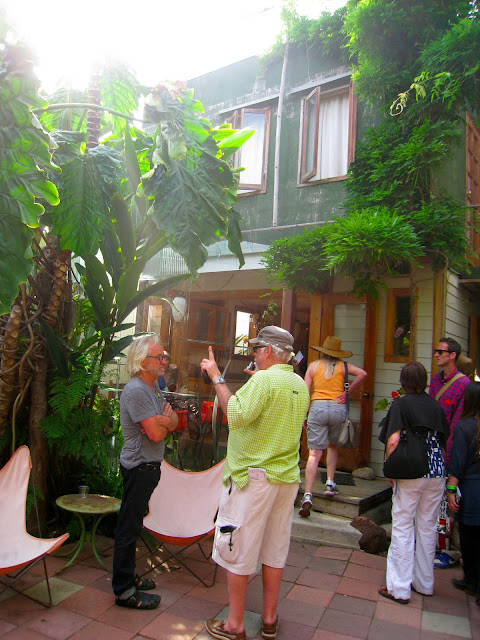 There is a trend these days with stones and gravel for landscaping, and I'm not that into it. It feels cold and uncomfortable to me, even when you throw some color at it. I like to be barefoot outside, and these kinds of spaces aren't inviting for that. To me. 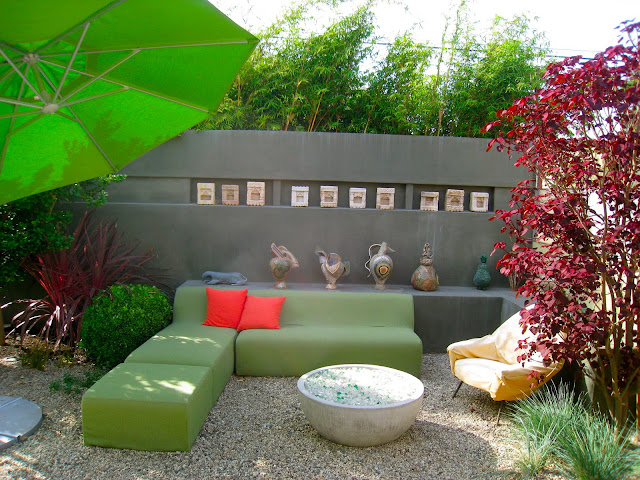 The clock was ticking, and we made it to Tour co-founder Jay Griffith's impressive gardens on California - another total retreat you had no idea was there -  and then sped on ... 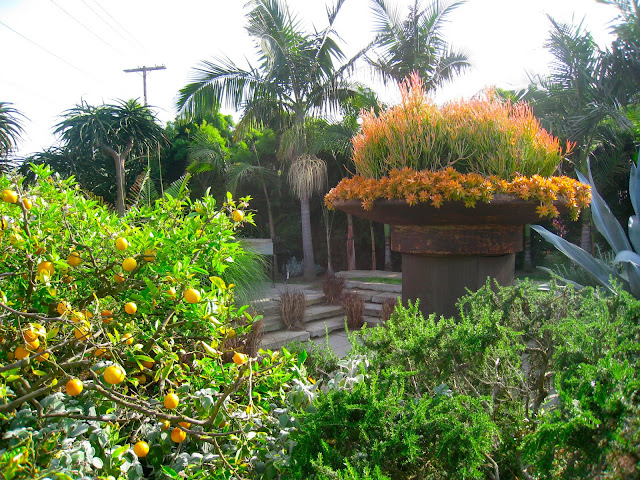 ... Alas, to no avail, as when the stroke of 5:00 pm hit, it was done. I saw a lady come out of a Tour stop on 6th and take down the sign. No nonsense, no begging. It was over. The house next door was a stop as well, but the sign was still up, so I poked my head inside. I saw this - 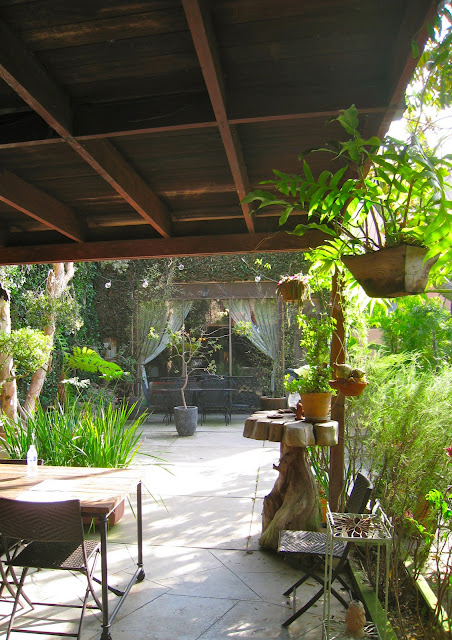 - and that's it, as a Docent on his bike was packing up and riding away. Wow. This stunning get-away behind a fence I've walked by hundreds of times! That is the magic of this wonderful every year day. You make discoveries each time that refill your gratitude and make you so happy to call Venice home. Now it's just up to me to go make friends with the folks behind the ones I missed ...

Congratulations to Barbara Bauman, the Garden Tour's indefatigable motor running it all, the Founders, Co-Chairs, Commmittee and Volunteers ... It was another smashing success, and an absolutely lovely day for everyone who partook in this important fundraiser for the Neighborhood Youth Association.

THANK YOU so very much for again showcasing the beauty of our community's places and people!
Posted by CJ Gronner at 11:30 AM