If you had left Venice even a year ago, and returned today to stroll down Abbot Kinney, you might think you got lost and wound up on Robertson or Montana. If you ever cared about Venice being cool and unique and outside of the mainstream, you would certainly be aghast to find corporate-owned chain stores - once thought to be forbidden - open for business for people that like Mall clothes. I'd like to think we as a community are better than this mass sell-out of cool ... but money talks, apparently. LOTS of money, and lots of talking. 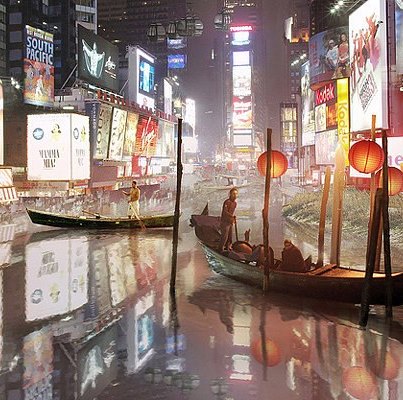 Many of the businesses that made Abbot Kinney a cool destination in the first place - Surfing Cowboys, Jin Patisserie, Venice Vintage Paradise, Plantation, Capri Restaurant (and its great pop-ups), Glen Crest BBQ,  etc ... - are now either getting the boot by outlandish rent increases or choosing to sell in the big money grab of now. It's stomach turning, and sneaky too.

Places like Steven Alan, Robert Graham, Jack Spade, Civilianaire, the soon to open Scotch & Soda, and Flannel, and the mall-looking row of LF, Lucky Brand, and Gant are all corporate-owned, and sneaky because some sound like little boutique shops, but are really owned by massive conglomerates. They are turning our beloved Venice into a place just like anywhere else ... the last thing we who care about the history and freedom of Venice would ever would want it to be. That big mural of Abbot Kinney on South Venice Boulevard, looking down over his creation, now appears to be cringing every time I see him. 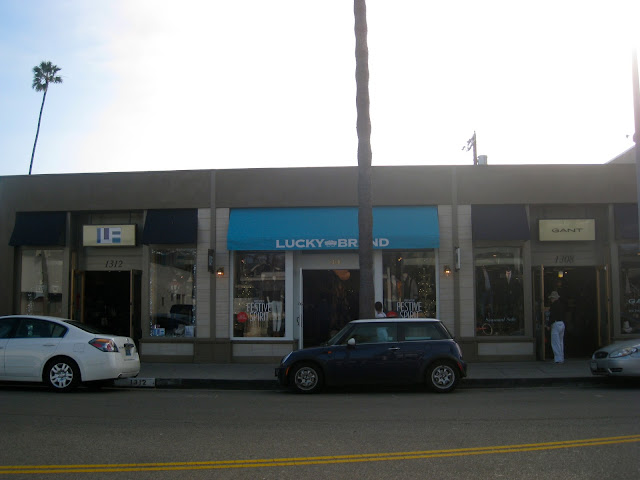 I had a good chat with Wayne Gunther, owner of Surfing Cowboys, who told me that his pioneering and well-loved business on Abbot Kinney is seeing its building being sold - and its rent skyrocketing - to a Dutch company called Holland Investments, LLC, headed by a Benjamin Derhy (no phone number listed), who seems to be doing a lot of the big buying out of Abbot Kinney. Gunther told me that Derhy's "Henchman" is Drew Glickman of Abbot Kinney Realty, who according to Gunther, tips off the buyers when the leases are coming up, so they can pounce on it, and offer such astronomical sums that sellers are obviously finding it hard to refuse. No one can make a profit when all the revenue is going to rent, so the business owners have no choice but to pack up and move elsewhere - if they can. Surfing Cowboys is moving to a bigger, cheaper space on 12553 Venice Boulevard, which will be great, but is an extra bitter pill to swallow for the Gunthers, who even lived in the back of their current space at one point, when NOTHING else was around. They're excited for the new prospects (their own parking lot!) and do a lot of great business online too, so they'll be fine. But still. In discussing why we loved and ever wanted to live in Venice, Gunther said, "I mean, just that there's VALET PARKING in VENICE is ridiculous!" Agreed. 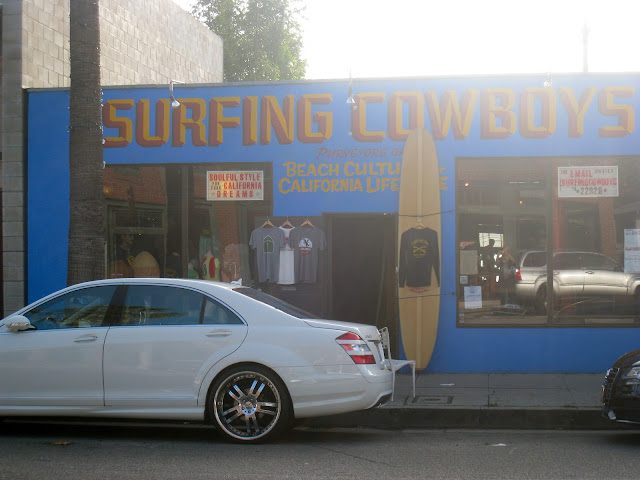 These corporate wheeler dealers all claim to want to maintain the integrity of the street, but MAN, are they not looking at the big picture. First of all, they don't know the community. Venice doesn't want to buy stuff to look like everyone else in the world. The Venice that I know/knew and love takes pride in its individuality and free spirit. The Venice I believe in ran the corporate Pinkberry out of town with pickets and protests. I heard there were some picketers outside of the new Lucky Brand store, and that might be the kind of deal it's gonna take. If not outright picketing, which I encourage, then certainly boycotting. Let the Abercrombie T-shirt wearing tourists go there, because they're going to anywhere they go, but don't let that be YOU. If you chose to live here, with all that Venice is, good and bad, then YOU know better.

If Venice becomes a place full of chain stores that anyone can go to anywhere, then we lose all that made Venice cool in the first place, and there's no reason for all these international tourists roaming around to come here anymore. We'll be just another mall, and then a ghost mall, when all the boarded up shops and fancy build-outs sit rotting because no one could afford the rents anymore. 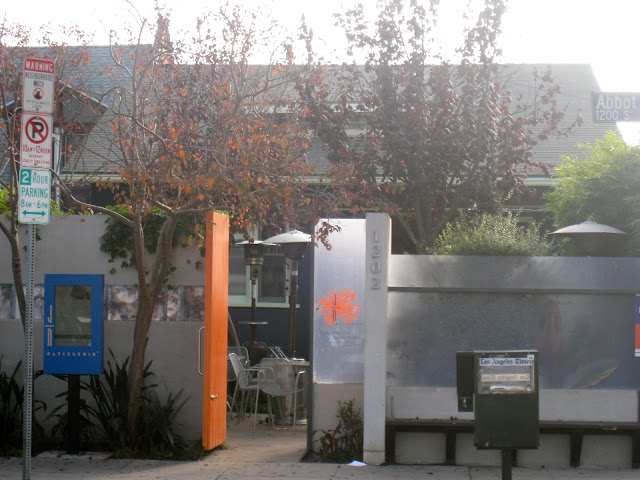 Like the $40,000 (!!!)  the guy that owns the Jin building thinks he's going to get for that space. Jin's lovely owner, Kristy Choo, told me that someone else said they could get $47, 000 a month for the little cottage with the charming patio SHE created, that they are now using as a selling point. She'd have to sell a whole lot of her perfect chocolates and pastries to meet that rape of a rent, so is looking for a new space, and hoping she'll get to stay on through the holidays. The buyers use the GQ article claiming Abbot Kinney as "the coolest street in America" as a bargaining chip, again failing to realize that as soon as the chains and big money take over (if we LET them!), it ceases to be any kind of cool - immediately.  Like I always say, "If it's in In Style, it's out of style." Please let Choo know if you know of anything REASONABLE, because it would be a damn shame not to have Choo and her  flawlessly delicious wares here anymore ... booted out of the happening boulevard that she helped to create. 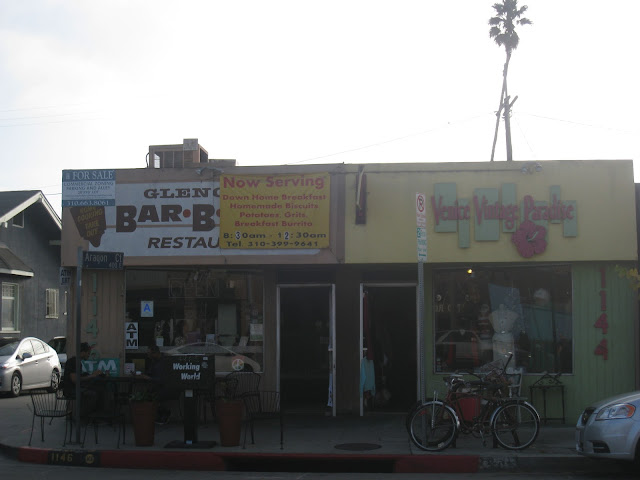 It's all such a sad commentary on the role of greed in our community these days. I could tell you stories for days about artists that can't afford it here anymore - the very ones that settled here because it was the only place they COULD afford. My own rent has gone up already and I've just lived in this place since May. Building sold, new owners wanted even more money. So less money to spend locally. Again, a failure to understand the bigger, longer-term picture.

There are success stories on the block, of unique, family-owned businesses like Hal's, Principessa, Abbot's Habit, Abbot's Pizza, Firefly, The Green House, The Rooster Fish, Tumbleweed and Dandelion, Zingara, Joe's, Primitivo, Just Tantau, Trim, Urban Escape, Strange, Invisible Perfume, Huset, The Beauty Bungalows, Ananda, the Shoe Repair Guy, The French Market (but of course!),  and a few more, that I encourage you to shop and eat at every chance you get, because they DO know and care about their community. But they are increasingly rare, and on the endangered list too, if their leases come up and dollar signs are still blinding people to what is truly cool, and what set Venice apart from the rest of the world.

I also encourage the folks who like to ride naked down the street on their bikes, or roller skate down the middle of AKB in a chicken suit just for fun, or leave art installation treasures, or wear a sign that's funny, or let your kid wear their Halloween costume again, just because it's Tuesday, or  .... you get what I mean. Be Individuals! Be Fun! Smile and say Good Morning, like we always have done, none of this cold hipster biz I've seen. Be decent, at the very least. Be Venice, for goodness sakes! 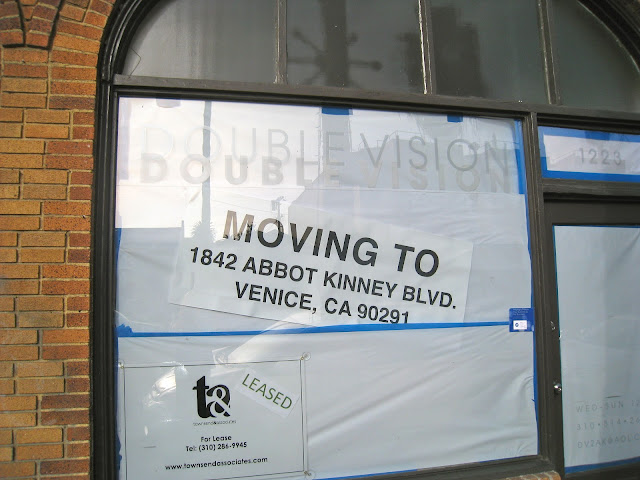 Remember Mobay? Venus of Venice? The Korean liquor store where Wabi Sabi is that had like three items in stock? The Hydrant Cafe? Slave? Stroh's? Van Gogh's Ear? Ten Women? I do, and fondly. Wouldn't it be sad to be having this talk in a few years saying, "Remember when Starbuck's was Abbot's Habit? Remember when Domino's was Abbot's Pizza? Remember when The Gap and Gap Kids was Firefly and Kid Firefly? Remember when some b.s. like Chili's was Hal's? Remember when Joel Silver's office was the Post Office? (wait, that DID happen!) Remember when Venice was cool?!" It could happen. It IS happening.

(And by the way, not even big corporate stores are fine, as the still-new Quicksilver store right around the corner on Venice Boulevard (former Samy's Camera) is already gone. I never even went in, and I think it's because it felt too mall store chain same, which holds no appeal for me. Bye. Exclamation pointing on this entire discussion. ) 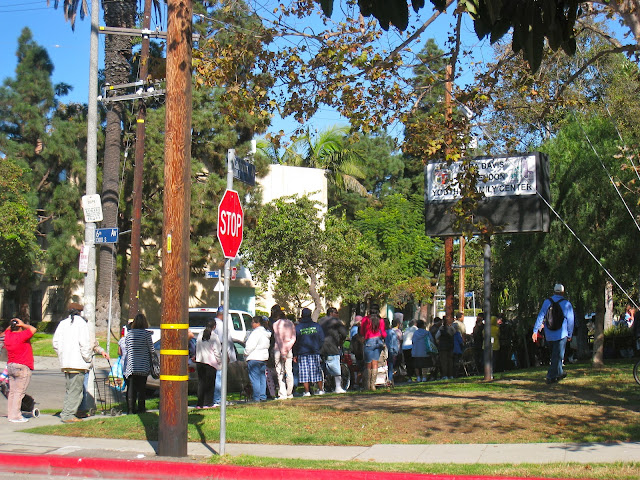 A couple of days before Thanksgiving, I walked by a massive line outside of the Vera Davis Center, where they were distributing food to those who really needed it for the holiday. The line (of mostly elderly people, so you can save your "Get a job" comments, if that's your argument. There are none for them.) stretched down way around the corner, past the Electric Lodge, made up of our residents and neighbors who need help. It wrecked me all day to think that one block over from Electric, on Abbot Kinney, there are those who could take one month's proposed (filthy with greed) rent and feed everyone in line for a year, at least. Who do we want to BE, as a People? Geez ... It's just sick.

I recently saw a bumper sticker that read, "You Ruined Venice".  Please don't let that be you, and please don't let that happen. You can't take any money with you, but you will always have the golden memories of your time in OUR Venice. The preservation of those sweet times is in OUR hands. Don't. Ruin. Venice! BE cool.