The best place in Venice to capture the spirit of Halloween every year is along Rialto Avenue. The residents all come together to create a spooky, fun atmosphere that has become THE Halloween destination for young trick or treaters. 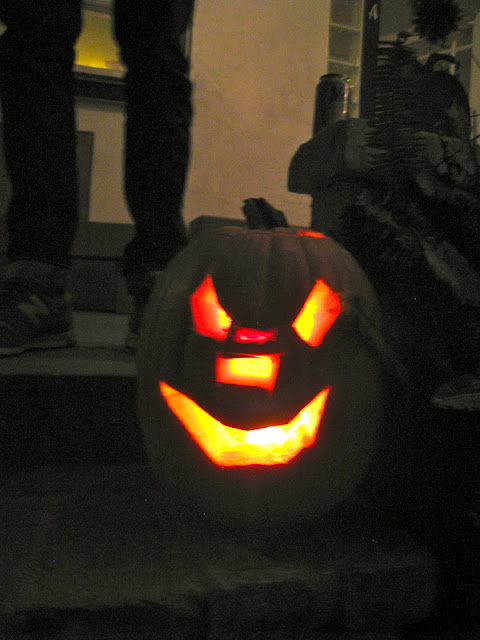 Earlier in the evening, I spotted this handsome Elmo skating down Abbot Kinney, being a good and funny sport for the occasion. 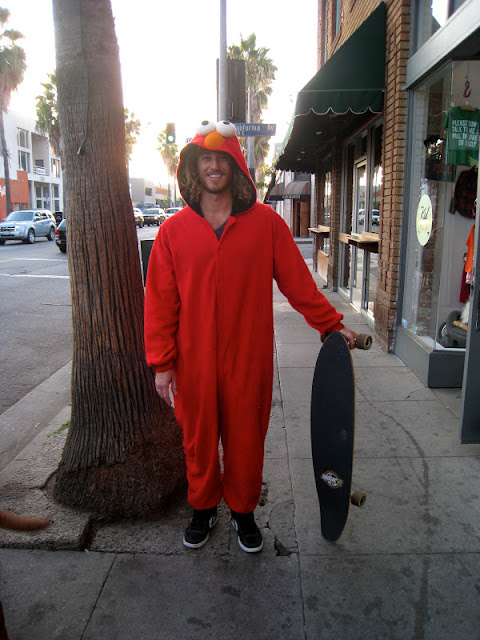 As dusk fell, the crowds got bigger and the parties got underway inside the homes too. Candy was overflowing from bowls, and one costume cuter than the next would arrive to great commentary all evening. 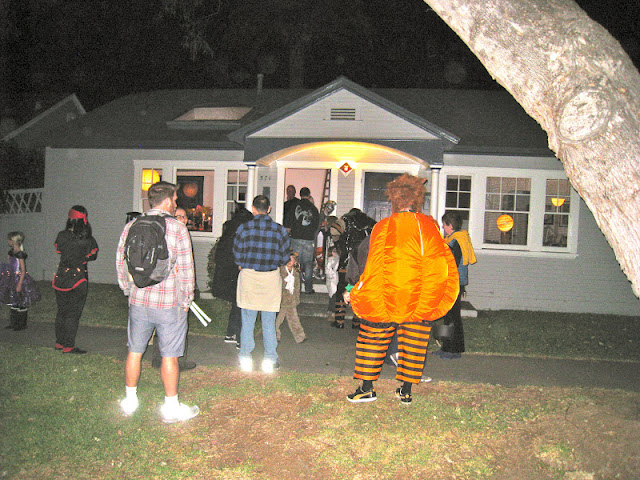 There were quite a few large pumpkins roaming about, which I appreciated, because they're FUN, and hard to make into a "Sexy Pumpkin". 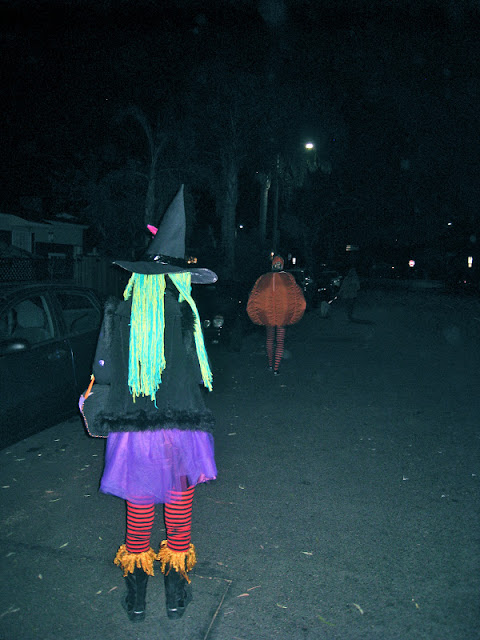 The bungalows were all decorated, and most of the people inside were too. I was impressed at how many adults were dressed up just to hand out the candy. 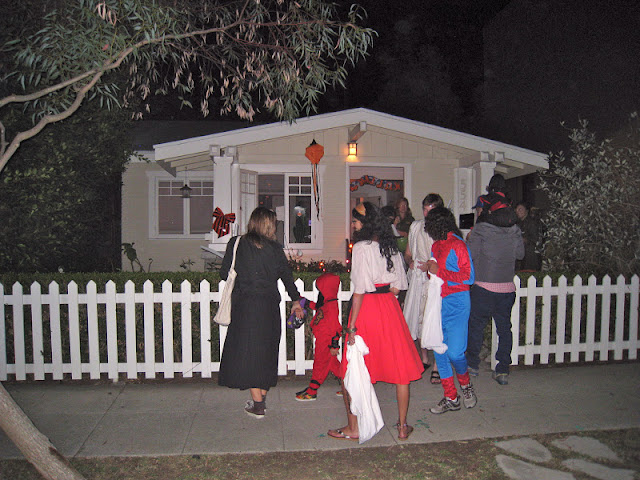 There were all the usual witches and superheroes, fireman and devils, and everyone was having a blast, no matter what they were dressed as. 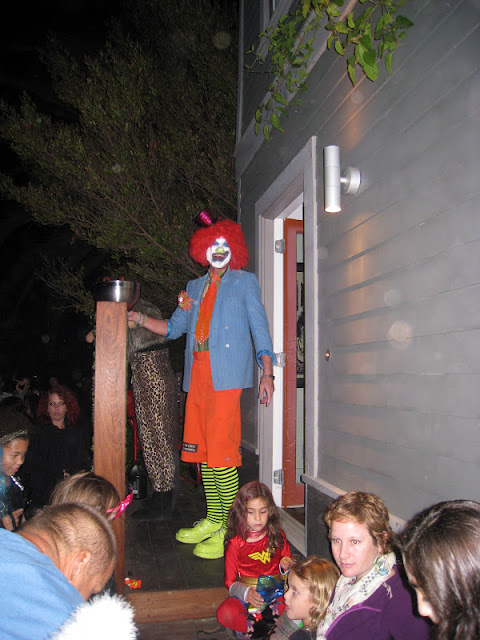 Like my friend, Harry, who hosted his doorstep in terrifying clown garb. And the kids didn't even blink! 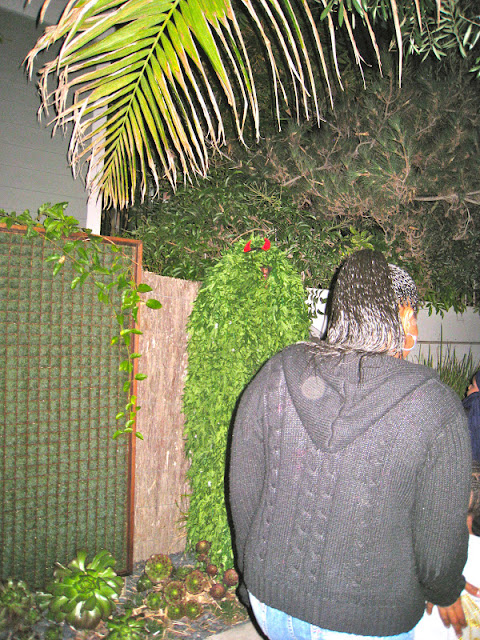 The Shrubbery Scarer was back this year, as this unsuspecting woman was about to find out. Classic, and worked every time. You could hear the shrieks from down the block. 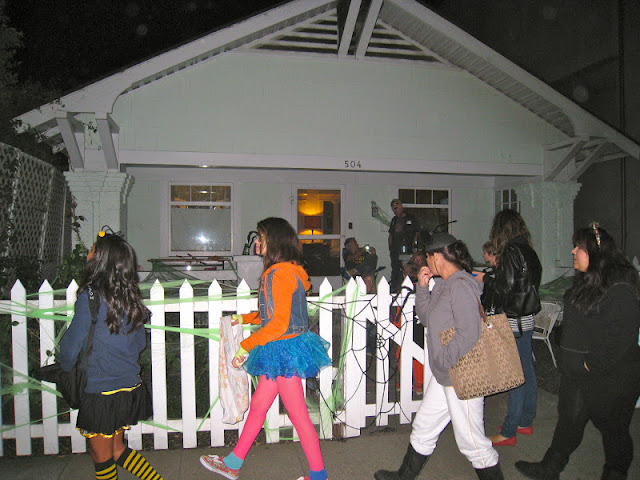 Trick or treaters were given both options at many houses, as people had really gone all out this year to make it a spectacle, with cool lights, and spider webs and even a haunted jail put on by skate and Skate Park legend, Jesse Martinez and his friends! 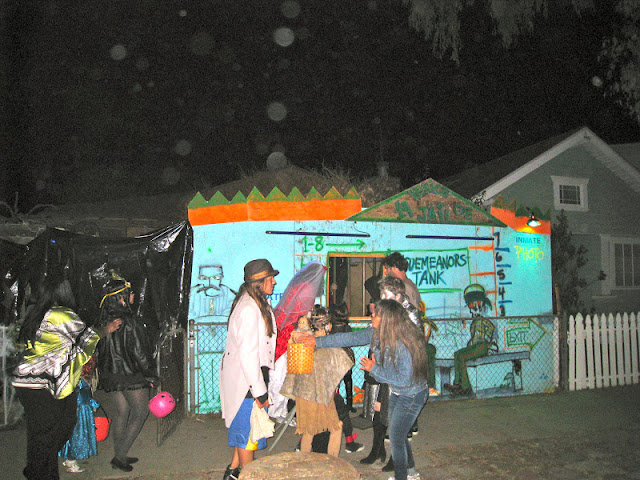 It was pretty elaborate, and wins for most effort, for sure. They even had techno stuff like stepping on a mat that was rigged up to a scary Chucky doll that would rise up at you in the window when you stepped on it. Impressive. Fun! 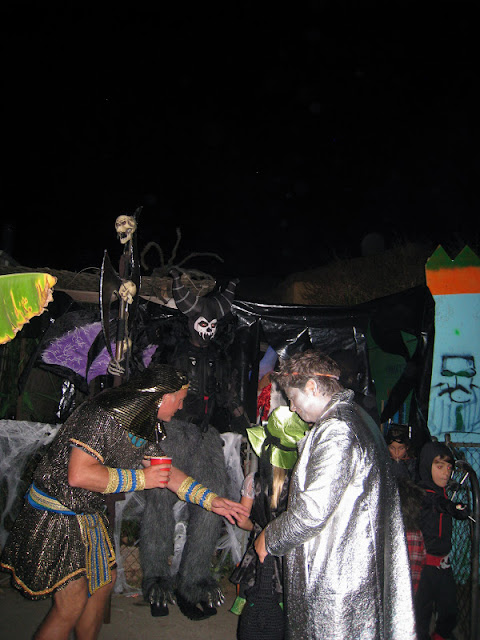 L.A. is great for Halloween with all the makeup artists and visual effects people that make it home. 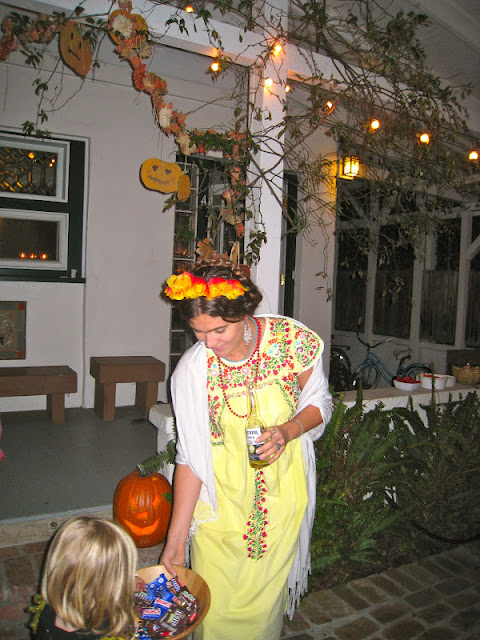 I hung out with my hosts Frida and a Cowboy, where we all pretty much just laughed all evening. 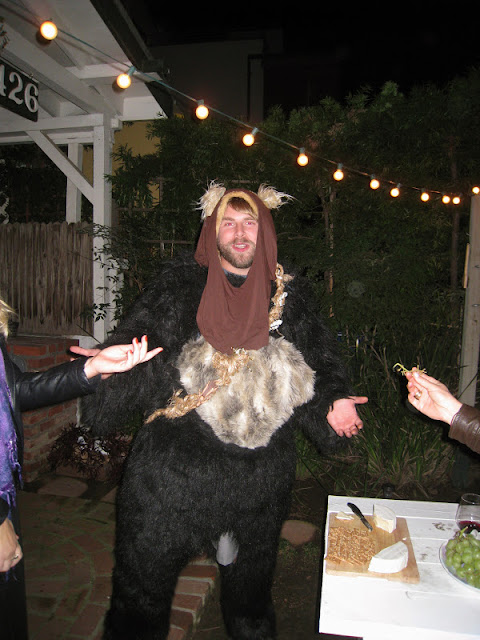 ... Darling kids, some so tiny they just were along for the ride. 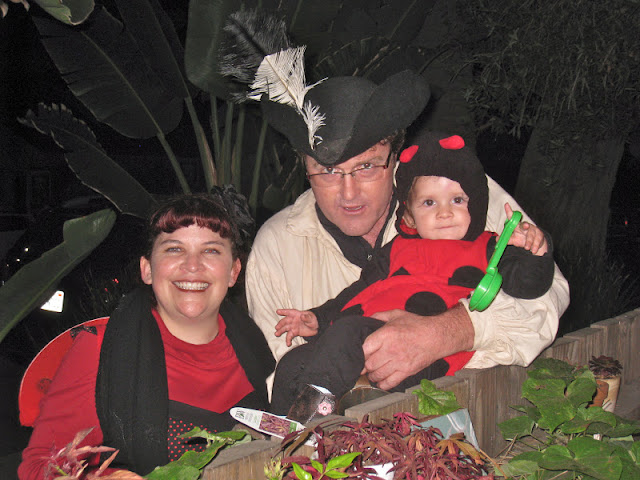 The parents were as into it as the kids, and many were even more decked out than their kids. Everyone can play! 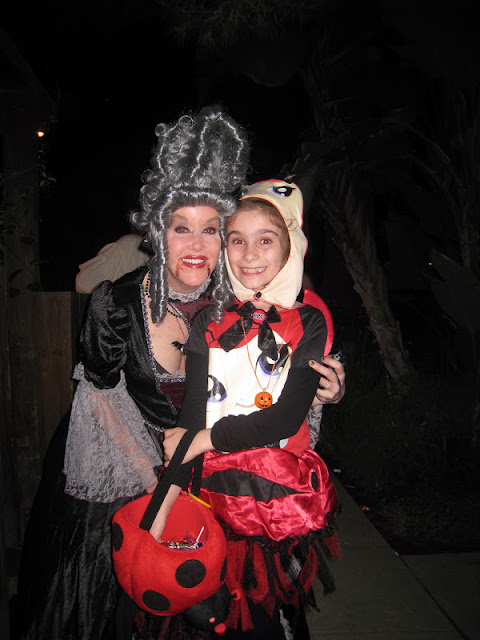 There were a couple Marie Antoinettes, and the one below had even rigged up her bike to be a coach for the young princesses inside ... who were kind of over it. 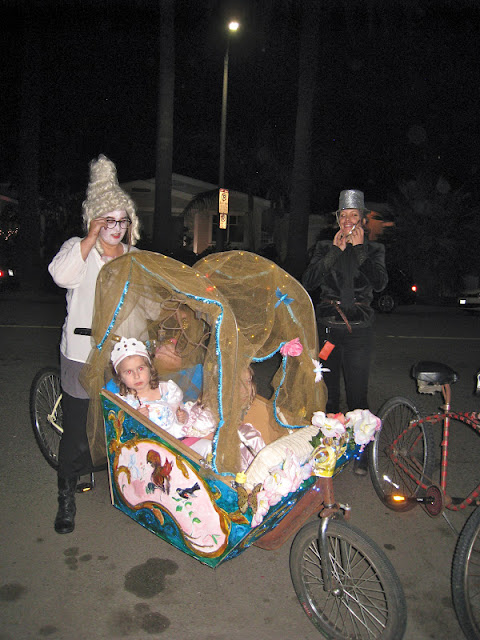 Scary, adorable, topical, hilarious ... it was fun just to kick it and watch it all show up on the doorstep. 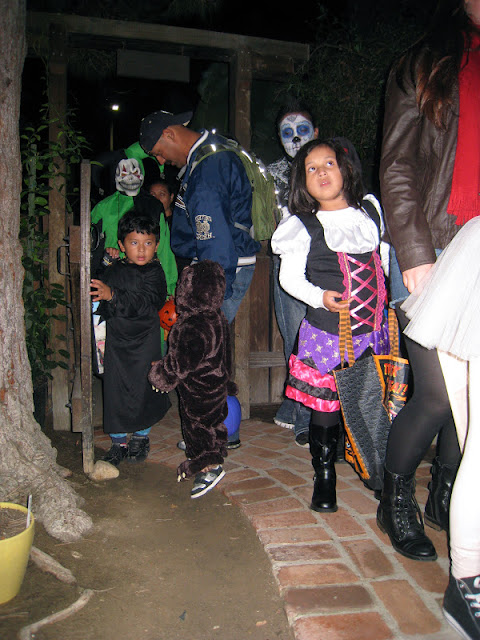 This woman was all ready for Day Of The Dead tomorrow, and looked great. 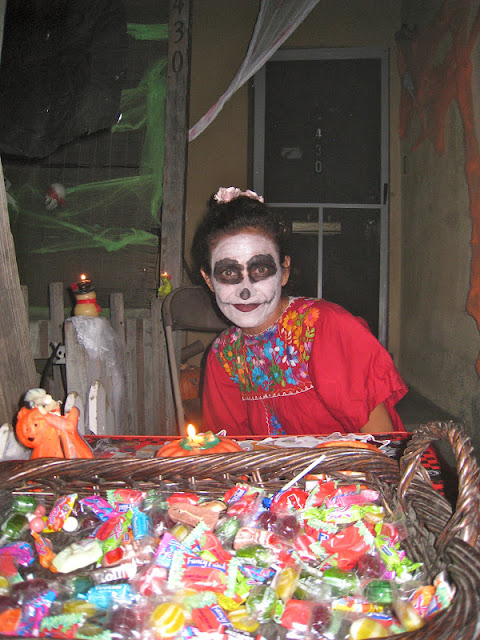 Then as things were wrapping up, one more reminder to VOTE OBAMA next week, as Big Bird was out making the plea to save PBS. 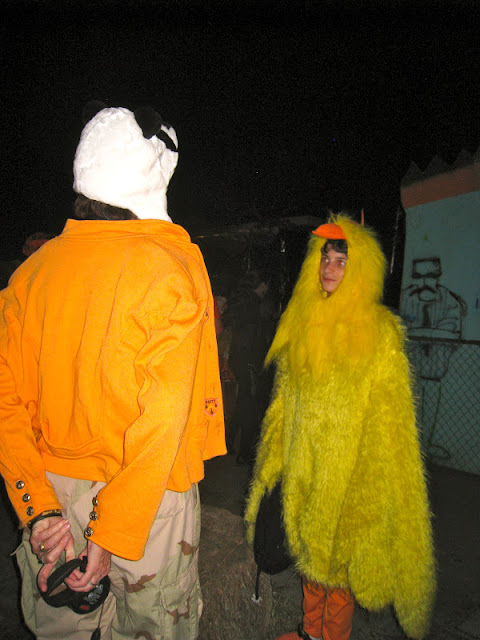 Another great Venice Halloween on the books, and a whole year to think about what you'll be next time! But we'll probably still wait until the last minute ....

Thank you, Rialto! You always make it such a good time for everyone in Venice, and we love it!
Posted by CJ Gronner at 11:29 AM