There are many musical acts in the world, sure, but how many of them put on a live show that makes people cry? Yep, a guy next to me in the pit last night at the 91X Fest in Chula Vista (down by San Diego) for Jane's Addiction had real tears in his eyes, and kept saying, "I'm a 37 year old man and I'm crying at a concert! I can't help it, Jane's has always been my favorite band and this is the first time I'm seeing them live!" And kept saying it. But you see, I do understand. I'll never forget my first time seeing Jane's. It was the first Lalapalooza, and I drank a lot to celebrate - much like this fellow last night. Too much it turned out ... but I somehow physically cured myself mentally because there was no way I was going to miss Jane's. That was a long time ago, and yet a Jane's live show just keeps getting better.

This was the last show of this leg of "The Great Escape Artist" tour for Juana's Addicion (we were very close to the Mexican border) and as it was a radio festival show, it had to be condensed down a bit for time, but the production was huge and epic and the crowd - where it appeared that many were seeing Jane's for the first time - was going OFF the entire set. As we drove down from Venice for the day and didn't start out in a hurry (and stopped off for Juanita's Carnitas in Encinitas!) I didn't see any of the other bands of the day, except for a couple of lackluster Garbage tunes. This was by design. We were there to see Jane's. 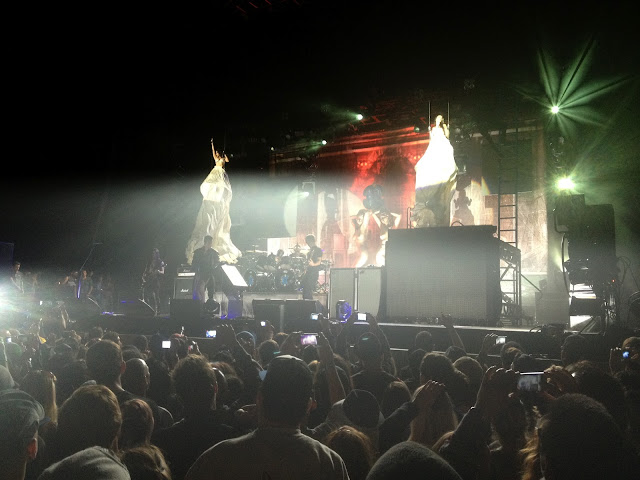 So were most of the people present, judging from the roars of excitement that went up from the pit to the highest part of the back when Perry and the boys strolled out to some Pink Floyd. The screams turned otherworldly when the band kicked it off with "Underground" from their new and awesome and you should get it right now if you don't already have it album, The Great Escape Artist. Yeah, I love it. So did everyone else there, especially when Etty Farrell and Stephanie Spanski, the Jane's dancers, were raised up on trapezes in giant white hoop skirts that trailed beneath them as they swung back and forth above the stage, and their male dancer, Bubba Carr, chased after them in a furry black monster costume. It all had the perfect underground feel, dark and ominous, but beautiful at the same time. 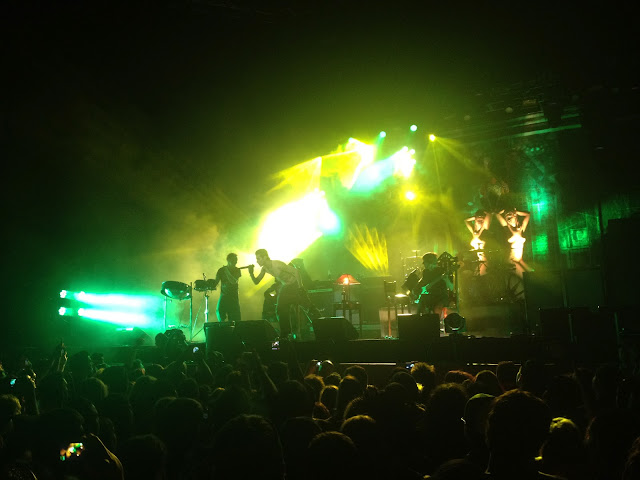 I was jumping around so much in there with the rest of the hyper-stoked people when the familiar opening to "Mountain Song" began, I can't read one word of my notes, but trust me that the kids in that place, young and old,  were screaming loving it. Movie screens played scenes of waves and people and other things but all eyes were on the band. Perry is one of music's all time best front men, and that has to be experienced live. His voice is so unique and inimitable, recorded or live, but to see him go off every second and never let up, and see how much he still clearly enjoys it, is what going to shows is all about. Dave Navarro's guitar shreds are dope on every track ever, but to see him rip them up all nonchalantly in person is straight rock and roll. Same for Stephen Perkins' drum beats tribally cutting through it all, and Chris Chaney holding it together with the tight bass lines, it's just heavy and moving and inspiring and ... Wow. 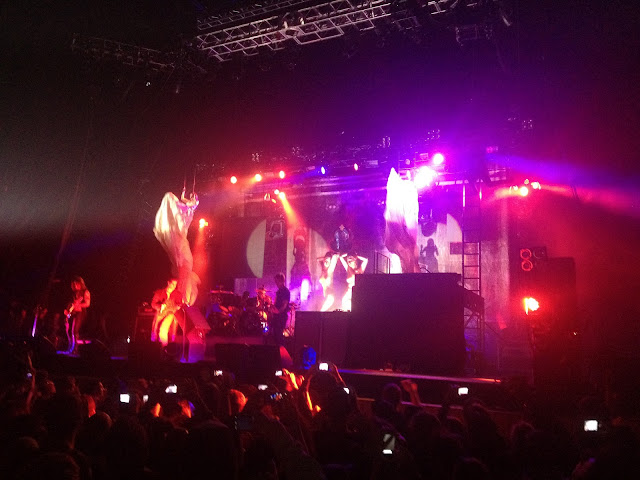 "I love Perry, Man", said the crying man nearby, needlessly as we already knew. Understood again, as when they tore through "Just Because" and "Been Caught Stealing" back to back, everyone in there loved Perry, even if they'd somehow never heard of him before (some teen girls I overheard and confirmed for my flabbergasted mind. Well, NOW they know!), as he was giving them the show of their just kicked off Summer. 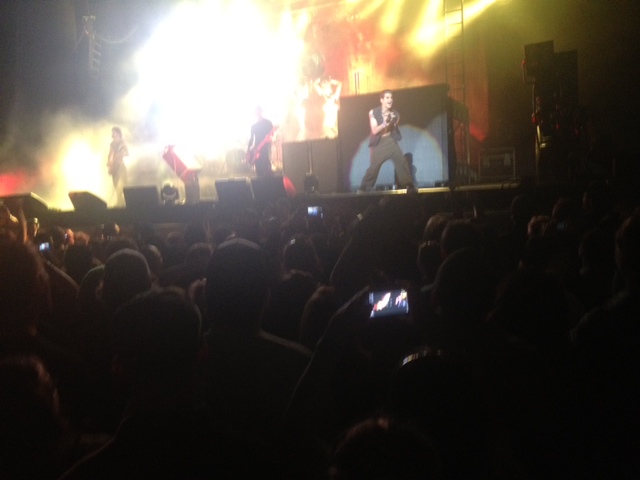 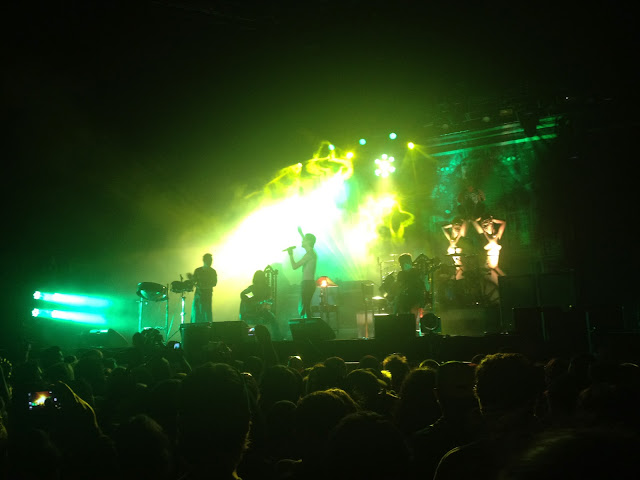 You can't be spent at all ever when you hear "Ocean Size" pound through your body. The screen had sweet waves rolling during this song that is sheer perfect for Southern California. It was huge, ocean size, really. Like when you feel the bass pounding in your heart and you just want more BIG. They powered right into "Stop" and the band showed how playing so many shows lately has made them air-tight. I want to go back and re-live the set because I'm getting all happy about it again typing about it. 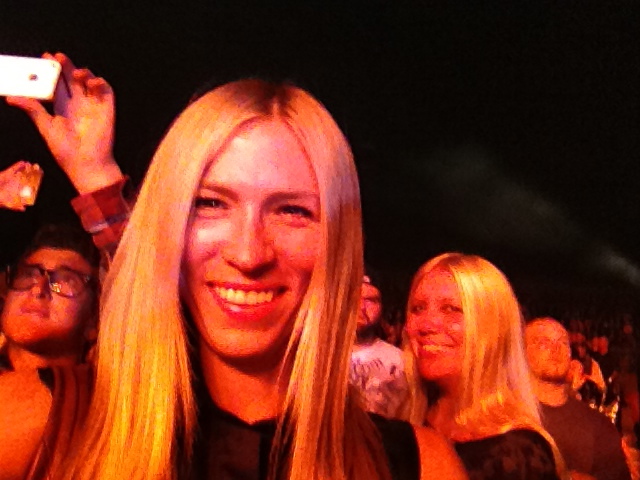 The hyper teenagers around me were feeling that way too, and by now even the crying guy was grinning. Perry was jumping around like a hyper teenager himself, and that energy is incredibly infectious. That's the feeling you get at a live Jane's show, and you should never miss that chance if you care at all about rock music. Full STOP. 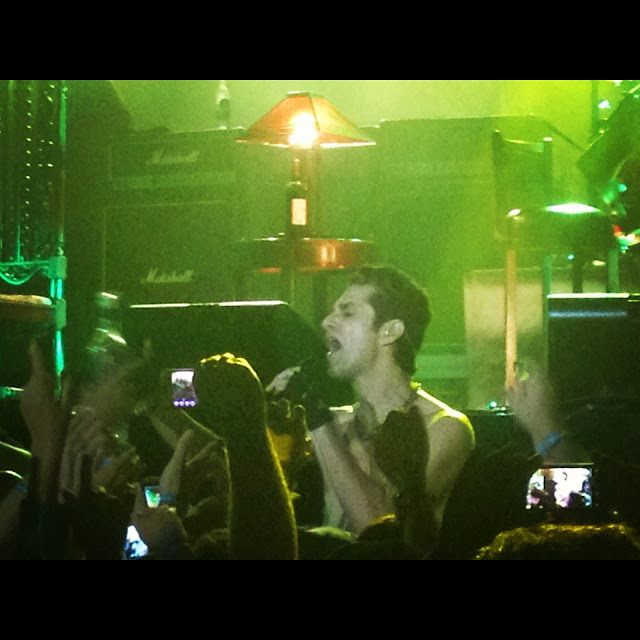 The amphitheater was packed, and it sounded like everyone in there was going hoarse yelling as the guys came back out to play the classic, "Jane Says", stripped down and acoustic, with steel drums.  Dave, Chris and Stephen lined the front of the stage, and Perry just left it, going straight into the pit crowd to sing along with all the fans that knew every single word. The people held Perry up as he swigged from a wine bottle and smiled.  As I think about it now, it was really more like everyone was holding each other up, sharing those rare and perfect rock show moments where everything is perfect (and under an almost full moon!), everyone is having a great time, drawing positive energy from each other, and no one wants it to end.

End it must, and did. The trick is to keep that feeling going inside yourself.

(Especially on the long, well worth it, late-night drive back to Venice. Rock!)

Catch Jane's Addiction on the next leg of this seriously spectacular tour!


*Photos by Stephanie Hobgood - in the pit!