Aloha To One Of The World's Greatest - Darren Sakai

There is a Memorial service today on the Big Island of Hawai'i for one of my life's greatest friends and inspirations, Darren Sakai. He died from awful cancer last week, and the world will never be the same. I can't be there today, so I'll look out across the Pacific from Venice and wish I were there to paddle out in his honor. I imagine all his loved ones getting up to speak about this joy of a human being, and this is what I would say if I could be there... 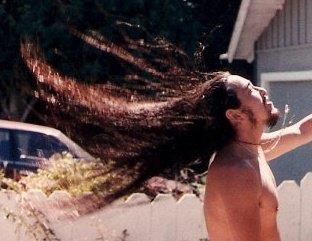 Darren Sakai taught me so much about life, while he was living it large, and while slowly leaving it. We were roommates in Hilo in the 90's, and every moment spent in his company was full of lessons, love and laughter. I stuck out like a sore thumb in Hilo, with my hair turned white from the sunshine. I had never had the experience before of someone not liking you for what you couldn't help ... your skin color. I was a dime a dozen in Minnesota, being Scandinavian, and when a big old Samoan girl once wanted to beat me down just for being haole. We worked it out, but it was the first time in my life I remotely experienced anything close to racism directed at me. It sucked, but what a valuable lesson to have in the back pocket of your life. Darren was one of the first people in town to befriend me. I'll never forget being on UH-Hilo campus with my one friend in town so far, Matt (also from Minnesota). This Asian guy with hair down to his ankles came walking up, saying, "Howzit?" and elaborately hand-shaking Matt, who introduced us. We were rock solid down from the very start.

I'd see him around town, driving his white pick-up truck, with the back usually full of plants or surfboards. When the big Northridge earthquake happened in California, there were fears of a tsunami hitting Hilo (twice before wiped out by tsunamis in its past), and choppers were flying overheard announcing "MOVE TO HIGHER GROUND!" I was on crutches from a hiking stumble, and began crutching up the mountain, as I had no wheels. Darren soon drove by, scooped me into the back of his truck, and we drove up into the hills and chilled until the all-clear. Darren to the rescue! Soon thereafter, everyone I knew had gone their various places for the Christmas holiday, and I was extra lonely. One evening there was a knock on the door and Darren and some pals were there to see how I was doing and if I wanted to hang out. So sweet, so thoughtful. We spent that New Year's Eve eating sushi and drinking sake in someone's kitchen, talking about all our lofty goals.

Soon after that, my living situation (in my boss's home - never do that) turned out to be too much to handle, and D Funk and I found a place on Hale Street with another friend, Chris. Darren moved me out of my pad in the dark of night in a hurry, and we moved into our fun house. There was no power for the first few days before it got hooked up, and we'd sit and talk and laugh and learn in the candlelight. Darren would sit and share his knowledge on just about everything, as he put tea tree oil through his long hair. Darren knew everything about plants. He was the first person I ever smoked what he called "the healing of the nations" with (late bloomer), as we listened to every single reggae song ever recorded in his room. I treasure the many mix tapes he made me, and hope there will always be some way to play those things. He instilled in me the deepest love for reggae, that still makes me think of him every time I hear that beat.

He was the healthiest person I ever knew. A Spirulina smoothie for breakfast type of guy, he was also a great cook (one Easter dinner we made of crab and purple yams remains one of my all-time favorite meals) who loved fresh food and gave great thanks for every morsel he ate. He trained all the time in martial arts, both mentally and physically. I still pull out the spin kick sometimes that he used to make me do all time, just for fun. He would quote Dragon - The Bruce Lee Story constantly, telling me, "Do not look at the finger pointing at the moon, or you will miss all the Heavenly glory." Deep - and understood. 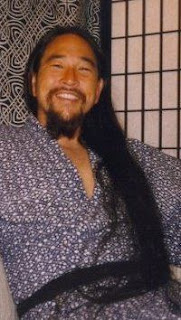 It is a cruel fate that someone as truly healthy and proud of it as Darren was would be cut down by disease. Darren Sakai has colon cancer?!?! It simply made no sense - and neither does life, often. It kind of makes you feel like you should do whatever you want, because there's no rhyme or reason to it all anyway. I think Darren would respond to that idea that it still makes you feel better while you're alive to treat your body and mind well, so that's the reason. He was always so wise - beyond his years - earning him the"D Funk Monk" title.
Man, when I think of all the treasures of times sitting looking at a perfect sunset, or swimming Kona side, or checking the surf at Honoli'i, or cruising the Farmer's Market and Abundant Life, going nuts laughing sometimes and sitting in quiet contemplation at others ... I just can't believe that there will never be another one. I hadn't seen Darren in person in years, but we talked and texted all the time. When he was dealing (for 5 years!) with the medieval treatments that I cannot BELIEVE are still the same as what my Dad (the anniversary of Dad's death from cancer was yesterday) had to endure over three decades ago, he somehow was able to retain his positivity all throughout. I would follow the day to day stuff on Facebook, and was so moved by how many people - perfect strangers even - he was touching through his courage in the battle that even this brave, strong and noble Sensai was ultimately felled by. 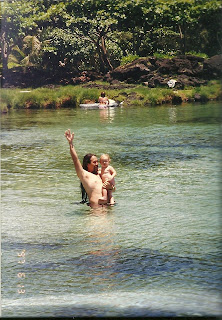 He once took me to Green Lake on a little adventure. I had slept weird and had that neck thing were you have to turn your whole body to look at something, so I wasn't going to go along on the day trip. Darren insisted that I had to see this place, and that it would heal me. We went, stiff neck and all, and hiked across the fields to the lake that even Jacques Cousteau's team never found the bottom of, as it's really a dormant lava tube. There was a raft moored to a tree for men to swim out to chill on, since it was said that Madame Pele - the Goddess of the Volcano - would suck men down into the never-ending depths if they put their heads under water. All the volcanic minerals made Green Lake a healing place as well, Darren said, and sure enough and no lie, I dove in the water and emerged to find my neck perfectly fine. Better than fine, GREAT! It was a magical day all around, and one of my fondest memories that I took with me when I moved back to the Mainland.

When Darren got sicker and it seemed that options were running out, it immediately occurred to me that Darren should try swimming in Green Lake. He told me that it was now on private property, and no one could go there anymore. That was when I started to formulate my plan to fly over there, get bolt cutters, and spirit him away to try it, no matter what the penalty. I was telling my friend, Matt Jennings, this story and he said, "I think that's your first song." Matt is a wonderful musician and had been encouraging me to turn my stories into song lyrics for some time, but I always balked. I've always felt more prose than poem. Once he said this about Darren and Green Lake though, it sparked in my head that I could do it because it would stoke Darren that he had inspired me to branch out creatively, which he too had always encouraged. I wrote the words, thinking about my Brother D Funk the whole time. A week or so later, Matt sent me the song with music. My first song! I cried, as I do, emotional that something lovely had been created out of our heads, but also because of how it had come to be, that it was for my dear friend, who was now slowly and painfully dying. I sent it to Darren, who replied, "AWESOME!" and now Matt and I have a whole bunch of songs, that came about only because of the first one. Only because of Darren.

We never got him to Green Lake, so we'll never know how that would have gone. We do know that anyone in this world who was touched by the grace of Darren Sakai is better and happier for it. My heart aches for his wife, Lora, who I've never yet met but who I know is fantastic and Darren loved her deeply. I'm so sad for his parents and all his extended family and friends, as there will never be another one like him. I wish I were there on the Big Island today to hug each and every one, and celebrate the life of such a rare and wonderful human being. I take comfort in the many happy, unforgettable times I was lucky enough to share with D Funk (He would call and leave a message, always singing, "Make my funk the G Funk!" at the end), and will carry him along with me in my heart and soul for the rest of my days. 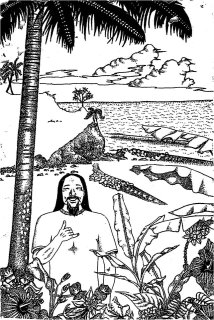 Aloha, my friend!!! And MAHALO, for bringing your joy into the world for every moment we were lucky enough to have you here, and for showing us how to live while you can. I'm not looking at the finger pointing at the moon ... I'm imagining all the Heavenly glory, made even more glorious by your shining arrival.


* Pictures taken from Darren's Facebook page as all of mine are old school hard copies I have yet to scan.

** I probably would have been more brief in person. Probably. Blessings and ALOHA!!! to all of you there in A Bay today!
Posted by CJ Gronner at 1:03 PM