The Wino-Strut of Artist David Phillips

I first learned about the art of David Phillips in probably the best way possible. I was walking down the beach last year when I came upon this crazy piece of art (that I now know is called "Birth") just sitting there in the sand. 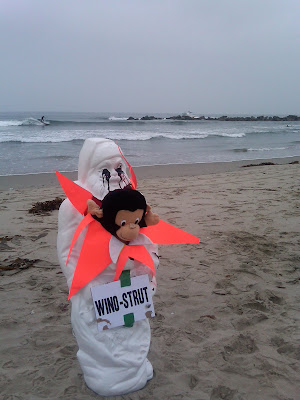 It had the curious name "Wino-Strut" across the front of it, compelling enough for me to write a little story about it at the time. Then I got an email from the artist - David Phillips - who somehow had seen the Blogtown article, and contacted me to invite me to his studio. THEN I got a random email from a reader - Matt - that they had come upon some more Wino Strutting on the beach and thought I might find it interesting. I did. 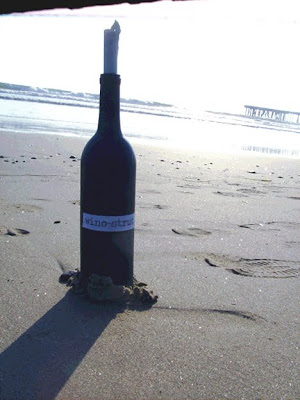 So time flies and things pile up and I didn't get to the studio, but then I got an invitation from Phillips to the Hotel Erwin for his opening during the Art Crawl last Summer. 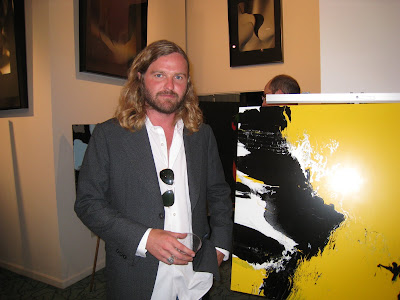 I went, it was great, and I had a new friend in Mr. Phillips. But I still didn't know the whole story. So a bunch more time passed, exchanging messages and trying to find a time to sit down and tell the tale, until it's a new year and you gotta make things happen, so we finally sorted it out and here we go.

Phillips is from Tulsa, Oklahoma (Sooners!). His Grandmother was a painter, so from a very early age, Phillips knew that he too wanted to be a painter - in fact, he started with oils. He grew up and wanted a larger audience for his art than perhaps Oklahoma offered, so "Art brought me here" - Here being Venice, California. He had come out and stayed on a friend's couch in Venice, and knew that was the only place that made sense for him to settle. Which he did, right on Abbot Kinney. He got a job as a PA, which let him afford to get a studio (which he says is in Venice, but really it's Marina Del Rey...Ha, David!) and he was off to the races.

Phillips would load up his truck with paintings and just hound gallery owners to see his stuff. Soon enough, after not taking no for an answer ever ("I was gonna be a painter whether they liked it or not!"), he got a gallery rep. This led to a spot on CBS News about his art, and he's been able to work on his painting full-time ever since. He IS a painter. 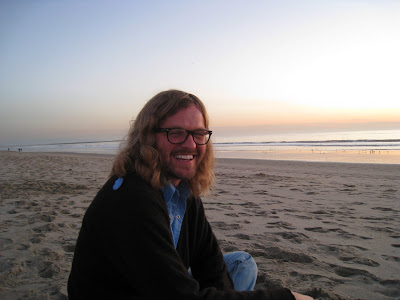 {At this point, we decided to leave the beach-adjacent studio and conduct our interview on the sand. I thought this appropriate as it's where I first discovered his work, and I feel great guilt and oppression over being inside when I know a remarkable sunset is shaping up outside. See below.} 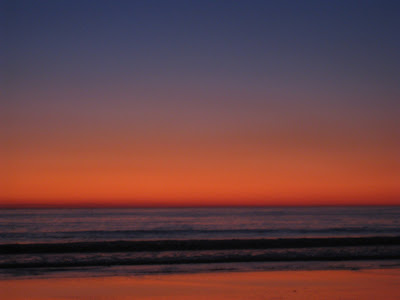 He's been hired by Urban Outfitters to do works, he gets a bunch of private commissions, but with all the edge and fun and good times and free wheelin' vibe of the beach, he started thinking about doing art that was more accessible to an even larger audience ... 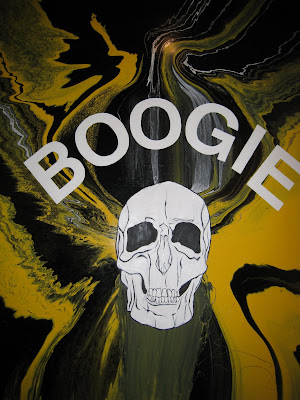 Willem De Kooning is "the end all, be all for me", says Phillips, and he recalled a story about De Kooning selling a painting (One of his "Woman" paintings, which later sold for $20 million) to a guy for a case of wine. De Kooning had to walk the outsized painting all the way uptown to claim his payment, and Phillips thought that would be called a "Wino Strut". This would become his name for his otherwise anonymous pieces that he leaves behind. He figured why let the graffiti artists have all the fun, and maybe the next step beyond graffiti as public art would be a contemporary artist leaving behind works that people could actually take home! 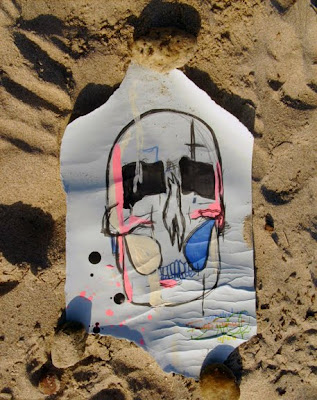 This began the Wino-Strut practice and Brand of "Giving someone a HAPPENING ... The experience IS the art!" So the installation like "Birth", that first led me to this interesting fellow, and his studio. Then he painted 500 bottles, inserting painted scrolls of abstract faces inside, and placed them all along the coast, from Venice (Marina Del Rey) to Malibu, for people to discover along their morning walks and keep. This little caper did earn him a call from the LAPD, who thought that he might be planting pipe bombs all over vs. just making someone's day. Sigh. 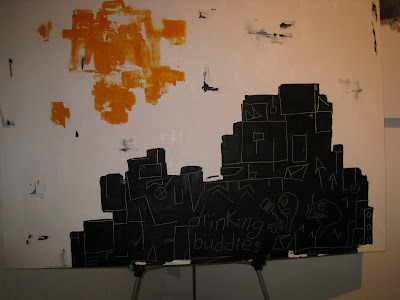 Phillips had just done an installation the very afternoon that we spoke, lining a bunch of bottles along the entrance to Groundworks on Main Street. Rather than think of the art as fleeting, Phillips sees it more as "Disrupting someone's monotony. This art HAPPENED. And now they have an illustration of a memory." How great is that?

We wound up our interview back in the studio, where there are multiple works in progress, as well as lots more bottles being prepared for a 3,000 bottle onslaught, perhaps somewhere near you. I was gifted with one, and it makes me smile just to glance at it and think of the lift one like it is going to give someone else, totally unexpectedly. Another day brightener in Venice. 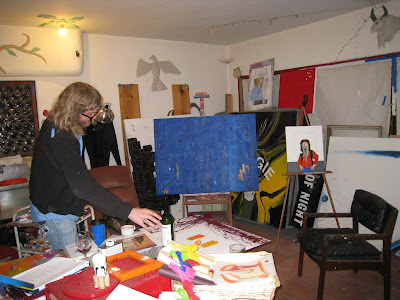 Phillips is a big fan of the Ferus/"Cool School" of art, and loves to mingle with those guys (Bell, Lodato, etc...) around town at Larry's Venice, The Erwin, the Art Crawl, VENICE ... and keep that inspired torch burning.

I'm so happy to know the story behind it all now, and look so forward to hearing about - or just again stumbling upon - what new hijinks Phillips has in store for the unassuming audience. He has followed his dream, and both had and brought fun to many in doing it. And that's about the highest form of living one can do. May he long continue his wino strutting!

THEN today, after posting this story yesterday ... Wino-Strut strikes again! Perhaps in celebration ... it looks like one! 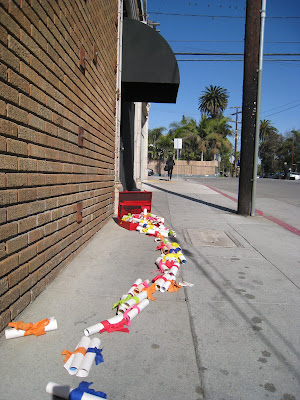 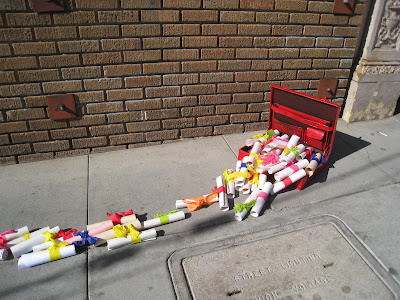