I was zooming back from the beach this morning, when I saw this poster on one of those power box things along Venice Boulevard: 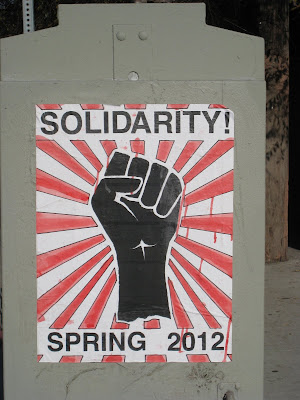 I love it, of course ... but I would raise this poster's "Spring" to "Forever". That's the whole point, that we're all in this together, and we simply must look out for each other. From little things like watching someone's baby or bringing them produce as a surprise on their doorstep, to big things like not voting like a crazy person for crazy people and policies. And when those crazy people and policies somehow weasel their ways into being, then banding together to oppose them and make things right.

If you've watched any of the Republican debates or read anything at all about any of the front runners on that side, you simply have to laugh. Out LOUD. Watch the State Of The Union tonight, and sigh in relief that even though President Obama has had his hands tied behind his back by BOTH parties the entire time he's been in Office, and has wussed out on some things (but triumphed in many others, I mean, c'mon!), the guy is smart. Compassionate. A daily dynamo amid super daunting circumstances. And still manages to be cool (did you see him sing Al Green?!). That's the guy I want at least TRYING to lead with some dignity and some fairness, since this is the system we currently have in place. Meanwhile, the PEOPLE can be creating positive change with the POPULIST Movements, hands free. By demanding it.

The Party System has to be abolished. No one can get anything done, and it's way too far past corrupt to really fix at this point. Everyone's in everyone's pockets, and we all know it. Which begat the Occupy Movements. Which will surge again this Spring. With leadership. And Solidarity - because that's the only way anything that has ever elevated the spirits and character of this country - or the World - has ever happened.

Get smart. Chins up. Fists raised. Together.
Posted by CJ Gronner at 2:17 PM