Unzipped: An Autopsy of American Inequality Has Its World Festival Premiere In Newport Beach - And Wins!

The journey to bring our feature documentary UNZIPPED: An Autopsy of American Inequality to the big screen kicked off on October 24th, 2021 at the Newport Beach Film Festival. This is just the beginning of our larger mission to catalyze debate, awareness, and action around the already massive - and growing - affordable housing (and humanity) crisis in the United States and around the globe with this film. 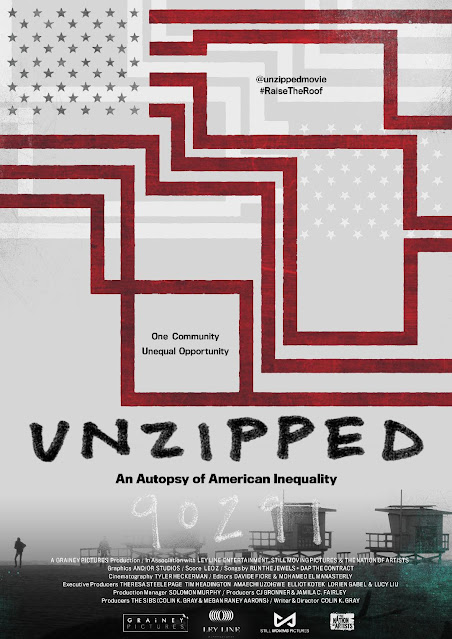 When we set out to make UNZIPPED in 2018, we could never have predicted how much the world would change with the Covid-19 pandemic as we were filming ... or how much worse the affordable housing crisis was going to get. We who have lived and loved in our beautiful home of Venice, California (an "INTENTIONAL Beach community of color" - Naomi Nightingale, as quoted in the film) have been watching the outrageous and growing income inequality and lack of affordable housing (THE issues of our time, along with the climate CRISIS - which are all related) push our friends and neighbors out of their homes for years, all while gentrification continues to demolish the very soul of our town in real time. This isn't new. 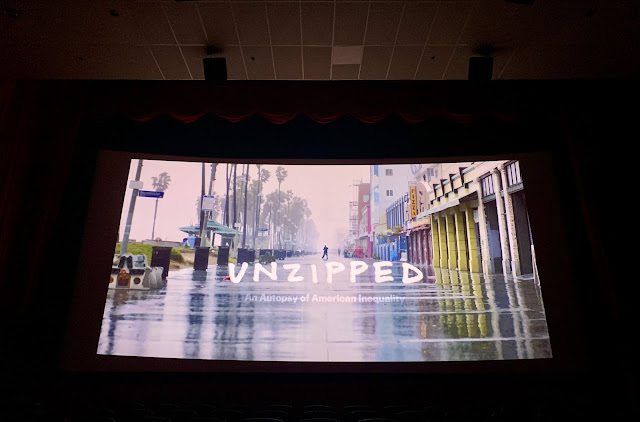 UNZIPPED follows the artists and stakeholders of Venice as they struggle to remain both housed and committed to their art, and to their/our community. We interviewed those on all sides who have been impacted by lack of affordable housing, homelessness, and rapid gentrification in our neighborhood. The overwhelming realization upon finally watching the finished film all unfold on the screen is that no matter what, we are all connected. All of us. We are ALL affected by the heartbreaking situation of families living outside on the streets, of people being evicted from their homes, of people struggling to remain in their community - and we can all do far better. We are one human family, and though some in our family are sorely lacking in empathy, it doesn't change that absolute fact.

A fantastic crowd from Venice made the trip down to Newport Beach to see all of our hard work manifest into something beautiful there in the darkened theater of the NBFF. It was a joy to see all of the familiar faces, as well as most of the cast and crew of our movie, led by writer/director, Colin K. Gray. If you have lived in Venice for any amount of time in recent years, you will recognize many people in it, as we filmed in and around Venice for the last three years (including over 55 shoot days, 80+ interviews, and hundreds of hours of footage). It is a very heated issue, and that comes across in the film. We tried to give voice to the different opinions on these staggeringly complex issues - in search of actual, positive solutions - so that maybe Venice, CA. 90291 can be more than just a cautionary tale of how NOT to let byzantine zoning laws, developers,  and divisive rhetoric run roughshod over a town, and possibly find a way to maintain the beauty of its character. There is still time. Time to remember - and honor - that Venice is the PEOPLE'S beach. 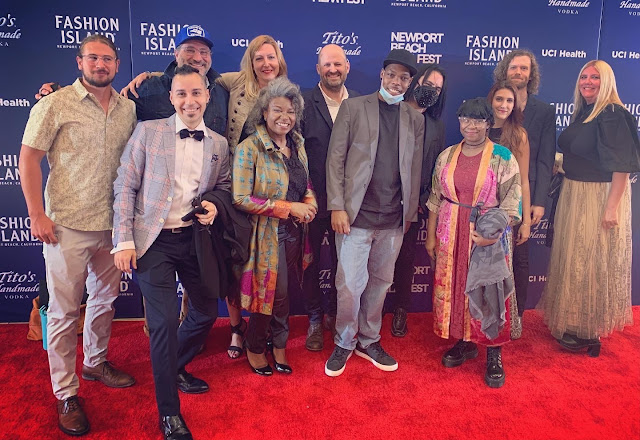 Venice is one of the most vibrant and exciting places in the world, with a rich history of pop culture forming within its boundaries. Art, music, surf, skating, style, writers, and eccentrics all combined to be the creative vortex we were all drawn to. I truly believe that will never fully change, but landlords and corporations and just plain greed are trying their very best to wring the cool out of it. Well, we're not having it. Hence, this film. Hence, all the organizations and good people rallying around it to make things a little more righteous ... a hopefully a little more just, equitable, and compassionate going forward. To that end, we filmmakers have teamed up with The Illumination Foundation, an O.C. based homeless advocacy organization, as well as the co-host of our NBFF premiere. We will also be rolling out a comprehensive social impact campaign along side the film release - #RaiseTheRoof - which will support other local and national affordable housing initiatives.  We will also be donating 10% of the film’s proceeds to leading organizations active in the affordable housing, anti-displacement and homelessness spaces.

We're also excited to announce Cargo Film and Releasing will now be representing UNZIPPED: An Autopsy of American Inequality for both domestic and foreign sales, as we all know that this issue has reached global proportions. Lack of affordable housing is a truly global crisis with over 1.6 billion people living in sub-standard housing.  UNZIPPED is a deliberately local lens on this growing national and global issue and we’re excited for it now to be shared with a worldwide audience. We're also thrilled to announce that Lucy Liu recently came on board as one of our Executive Producers, and that the incredible rap duo Run The Jewels has graciously allowed us to use their music for our opening and closing tracks ("A Report to the Shareholders/Kill Your Masters" and "Sea Legs", respectively)! 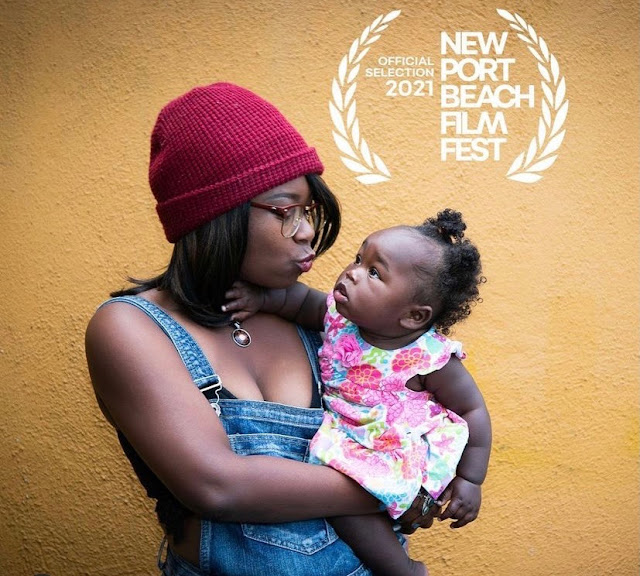 It was so wonderful and emotional to see it all come together in such a heartfelt and beautiful way at NBFF after the eye-opening journey of working on this film. I really hope everyone will embrace our film, and I also really think it can help. The key way to gain progress on any issue is opening up the discussion, and our film is both a provocative and intimate starting point. Once communicating openly, we as a nation can begin to both heal and advance our causes in a humanitarian way. And we MUST.

After the applause died down, and the tears were wiped away, we all assembled at a restaurant nearby to celebrate and catch up, as many of us had not seen each other throughout the pandemic (it was the first indoor movie for many!). The overwhelming feeling was not one of despair, but of hope. Hope that there is still time for America to fulfill its true destiny, as a nation by and FOR the PEOPLE. A nation that cares about ALL of its citizens, including the marginalized, and not just the ones with money. UNZIPPED: An Autopsy of American Inequality holds a mirror up to our country's collective face - and right now, it's actually kind of ugly and in need of a total makeover. We have the means, we just need the will. Our planet and its People are dying in front of our eyes. It doesn't have to be this way. We can do better. We must do better. We WILL do better. 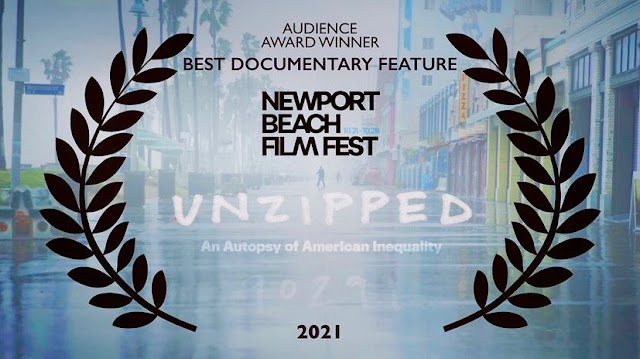 JUST as I was about to send this in for global publication, we got the news that UNZIPPED won the Audience Award for Best Documentary at the Newport Beach Film Festival! That's the one that's voted on by the people in attendance, not the industry panel of judges, which is even cooler, because this is a film for the PEOPLE. YES. Onward. UPward. Until it's totally normal that everyone has the basic human right of housing. C'mon.

UNZIPPED will next be in competition at the American Black Film Festival November 3-28, 2021, showing virtually from Miami this year. You can register at ABFFPlay.com for free to see the film, as well as a wide range of scripted features, documentaries, and short films. Following that, we anticipate a Venice premiere and national release in early 2022. Tremendous thanks to all involved who helped to make this important film possible. Please see it as soon as you can, and let us know what you think, follow our socials @UnzippedMovie, and get more festival screening, release, and social impact information at www.UnzippedMovie.com . Our hope is that it will touch your heart and move you to become involved in the growing movement to enshrine housing as a human right. Thank you!