I went to my first live indoor show since the Covid pandemic began last night, and it was only because it was to see my good friend, Shooter Jennings play - at The Fine Line in Minneapolis, which is a proof of vaccination venue, so I took the risk. And it was well worth it (so far!). 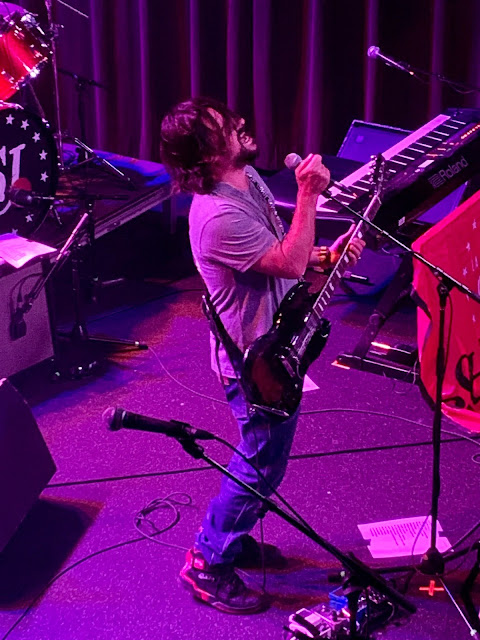 Shooter and I have been friends since the days of his first band, Stargunn - and what days those were! I've rooted for him ever since, and am so happy to see him enjoying so much success of late. Grammys for producing Brandi Carlile and Tanya Tucker's albums have made Jennings a hot commodity in the studio, and he's been so busy producing for others that he's not had as much time for his own music, so last night was even more special to get to hear him strut his own - and awesome - stuff.

The night opened with a set from Lillie Mae, a talented singer/songwriter who came up as Jack White's fiddle player. I was in the dressing room catching up with Shooter for much of her set, but did get to see her perform the title track for her most recent album, Other Girls - and it made me want to hear and know more. Dave Cobb had his mitts on her album, so that's the Jennings connection for this show. Excellent. 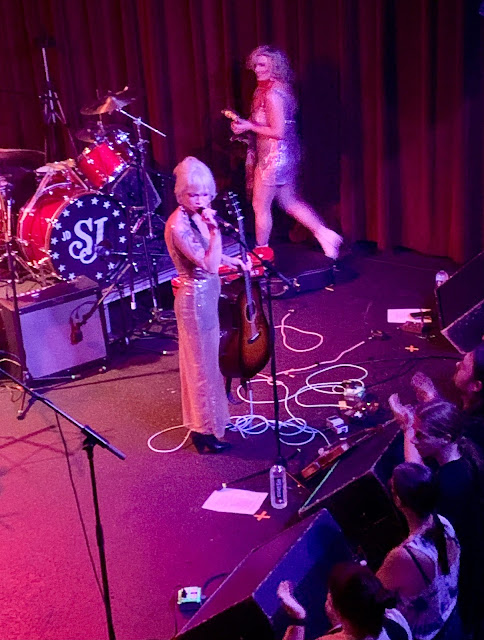 The crowd was packed in, and though they were presumably vaccinated, they were definitely not masked. I chose to head up top to the side stage balcony to try to keep away from the aspiration of others - in both senses of the word. Shooter and his longtime band took to the stage to huge cheers from fans that had been pressed up against the stage waiting in anticipation. Clad in a Brandi Carlile shirt and Jordans, Jennings yelled, "How you doin', Minneapolis?" - and it sounded like they were doing very well. Jennings sat down at the keys, and the band kicked of the show with "Bound Ta Git Down" from his Shooter album. The honkeytonk autobiographical banger got things off to a great start, and had me reminiscing about "Moving to California where the sun shines all day long"! Sigh ...

"Denim & Diamonds" showed off the great lyrical storytelling talent that Jennings has in abundance, and it had the crowd banging their heads in time and in appreciation for the outlaw stylings that they also loved from his legendary dad, Waylon. I has asked Shooter pre-show if he was going to play any from his outstanding concept album, Black Ribbons - in particular my very favorite song of his, "All Of This Could Have Been Yours", and that's the one that he played next - and said, 'This is for Carol." That was so special, because I love it, but also because it felt so absolutely great to be listening to a song I adore played live right in front of me by a friend that I deeply revere. Thank you, Amigo! 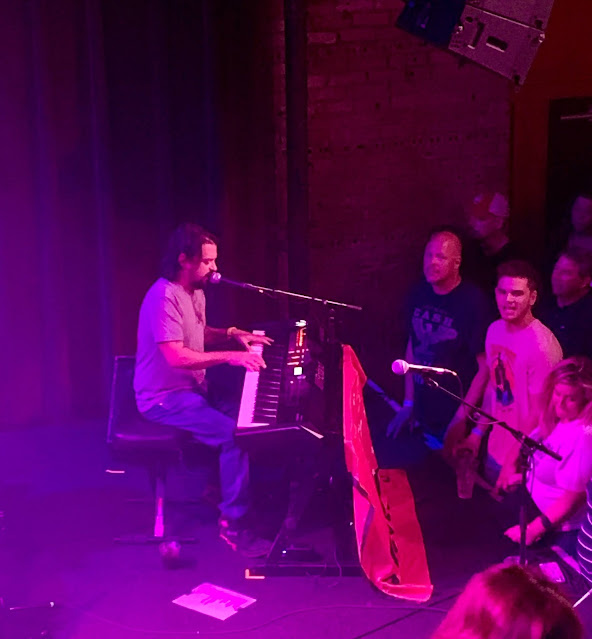 Switching to guitar for the rocker "Steady At The Wheel" from his awesomely titled album Put The O Back In Country, Jennings first introduced his great and super-tight band. John Sheffler on lead guitar. Ted Russell Kamp on bass. Jamie Douglass on drums. Aubrey Richmond on fiddle and background vocals. Each of them are so good individually, but together they are something else, as the showed on "The Outsider" that featured just enough twang to keep the o in the country sound. Jennings again thanked the crowd, and said that Minneapolis has been good to him since Day One, playing places like The Turf Club and The Cabooze (Thank you, Mpls!). 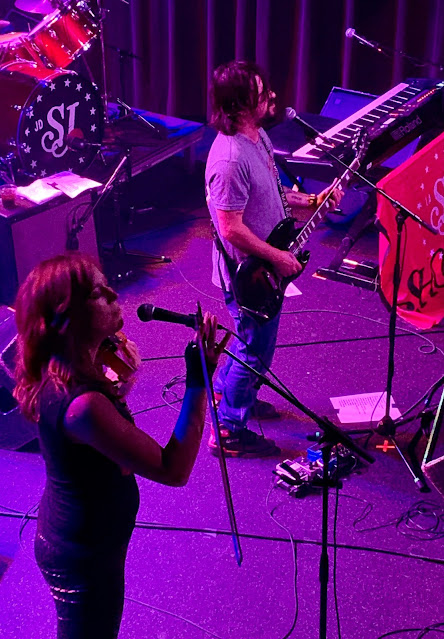 "Rhinestone Eyes" was a beautiful ballad written for Jennings' wife, Misty, from the Shooter album. She wasn't there, but it was very sweet because you could feel the love he has for her, even when she's not around. I love that. "Living In A Minor Key" was intended for a George Jones tribute album that never happened, but Jennings had taken it very seriously and still wanted to record it. It also found a home on the Shooter album, and when he introduced it by saying, "Just imagine a way better singer singing it, and it's like a George Jones song." Well, HE sang it perfectly, and it WAS like a Shooter Jennings song - as I believe he belongs in that same pantheon. And deserves to be playing way bigger venues like Target Center up the street. My two cents.

Everyone loves the 4th of July and everyone loved Jennings song of the same name. He threw out a "Those good old boys in Minneapolis", always a crowd pleaser, but he didn't need to do anything more to please this crowd. They were true fans, wearing the t-shirts, and knowing the words to sing along with. That made me so happy for him, because he's had a long career, been through a lot, and it's a joy to see him getting the reverence he should. "Loving County" was a Charlie Robison cover that Jennings has been playing for years, "Since my first band, Stargunn - Carol knows about that, she was there." I do, and I was. Very happily. Sheffler ripped off a guitar solo on that one that might have left blisters on faces. Wow. 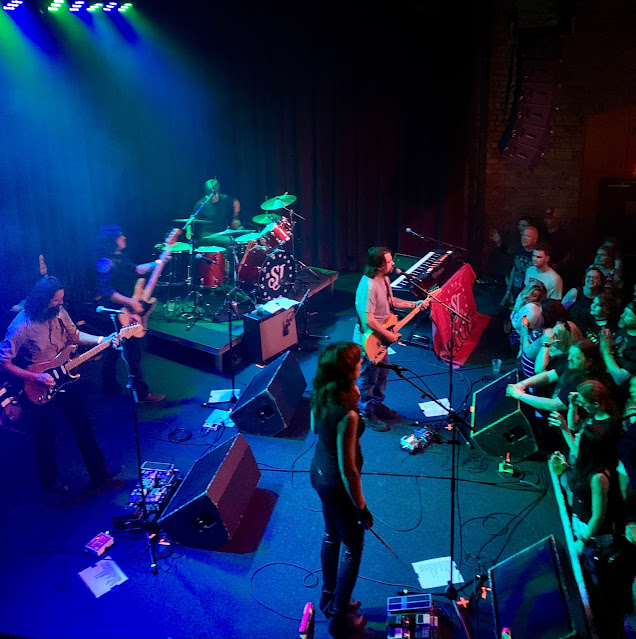 "Don't Feed The Animals" (also from Black Ribbons) was a heavy rocker that showed shades of the Shooter that almost replaced Axl Rose in Guns N' Roses - and produced Marilyn Manson's most recent album. The crowd was loving it, as I think his fans are finally ready to let Shooter be Shooter, and play whatever the hell kind of music he feels like playing. Like "I'm Left You're Right She's Gone" from his Giorgio Moroder tribute album, Countach (For Giorgio). A kid growing up in the 80's has a TON of musical influences, and Jennings is open to it all. There aren't many people that can talk music like Shooter Jennings. For real.

"Shades and Hues" was Jennings' personal tribute to Hank Williams Jr. and it had Jennings back on the keys playing this song that sounds as timeless as all the best country ones do. Aubrey Richmond really shone on this one, harmonizing with Jennings and completely wailing on her fiddle. "Leave Those Memories Alone" was dedicated to his late, great friend, Colonel Jon Hensley, who he wrote it for and with. A bluesy number ... you could tangibly feel Jennings missing his friend. 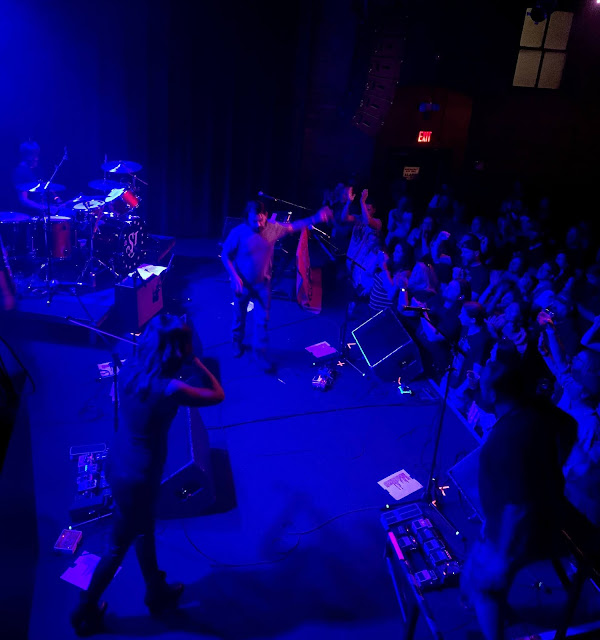 Another one that sounds like you've always known it as a real classic was "Fast Horses and Good Hideouts". Extra gorgeous, with really pretty fiddle playing, if they didn't have the room in the palm of their hands before - they did now. "White Trash" got Jennings back on guitar, and got the people dancing! Here came the "I love you, Shooters!" and "Shooter, You're the shit!s" - and they were right.

"I wrote this one about Nashville a long time ago," said Jennings by way of introducing "Outlaw You" - a perfect kiss-off to the baseball hat wearing wannabe country douchebags littering Nashville these days. They lyrics tell the story about how Waylon came to Nashville as an outlaw, changed everything, and now the suits are trying to package that kind of Outlaw - which, of course, you can't. So they should OUTLAW YOU! Yeah. There was a blistering jam between Russell Kamp on bass and Richmond on fiddle that foreshadowed the all-out band jam that came next, "Gunslinger". Big, epic, passionate ... clearly establishing the entire band as "motherfucking Gunslingers!" SO good. 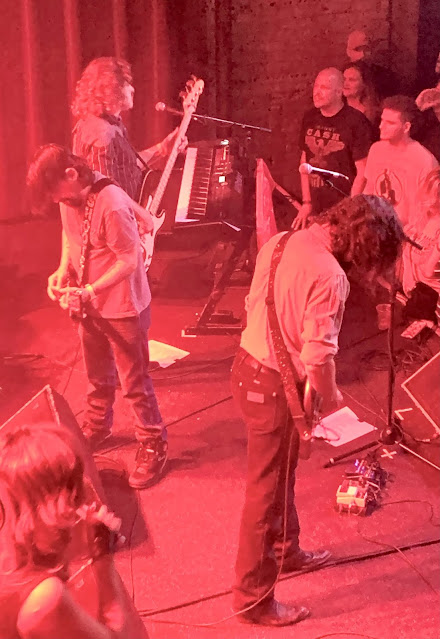 "Silver Springs" was the gorgeous ballad that would have people slow dancing in a different setting. I love watching Jennings on the keys, because he just BEATS on them and makes the most beautiful music. I feel like I'm kind of gushing about it all, but it just felt SO good to be listening to really great music LIVE again, that I can't say enough good about it ... especially as it's a friend who I think is vastly underrated for his own music, and I want to help blow it up even bigger for him. Because he truly deserves it. So there.

That loveliness was the last tune of the regular set, and the band left the stage to chants of "Shooter! Shooter!" They didn't make the people wait like some lame bands, and came right back out to play "The Door', a George Jones cover that most likely never rocked as hard as it did last night with this band. It was awesome, and it was very clear that the whole venue agreed with me. We might all have been just happy to see live music again, but I think it was more just that good. "Thank you, Minneapolis!" 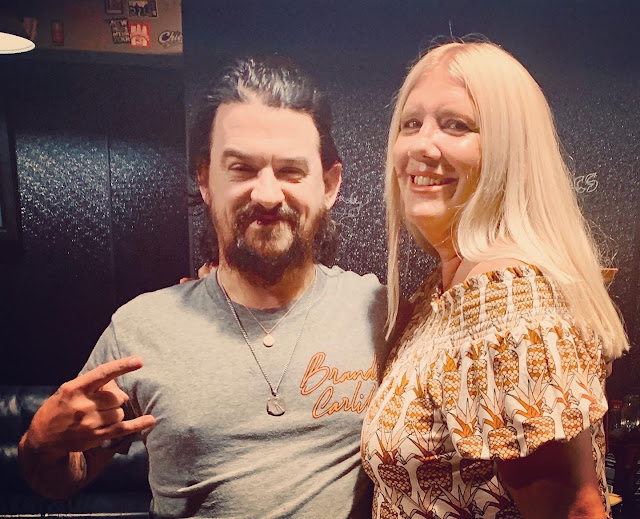 The band was sweaty, tired, and happy afterwards, all the hallmarks of a job well done. Shooter is off to Iowa to play tonight, and then off to Seattle to finish the next Brandi Carlile album. Lives are busy and scattered and very uncertain these days, but I think the power of friendship and music just might be enough to carry us all a little bit easier through these crazy times. At least it gives me hope.

Thank you for that, Shooter. YOU are a class act.