I've been going to Zelda's Corner in Venice since the turn of the century (Old school!). They opened in 1999, and have been catering to Venice sandwich enthusiasts ever since from their delightful location on the corner of Speedway and Westminster. 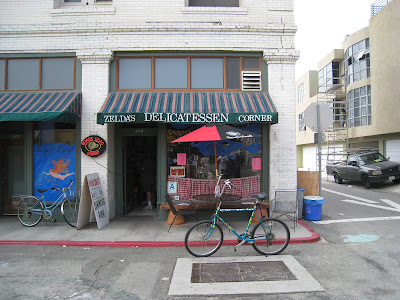 It didn't take me too long to figure out that the owners, Laura Lee and Paul Svobodny ("It means 'Freedom' in Czech, and that's why I love Venice"), were also from Minnesota. There were some tell-tale signs, like the scores for the Minnesota Twins being posted on their bulletin board, but the real hint was their scrumptious mini donuts. Exactly like I grew up having at the Minnesota State Fair. Being a pretty regular customer, I soon introduced myself and found this darling couple did indeed hail from my same part of the world (MPLS!!), but it wasn't until now that I learned their whole story, and how they came to be such a treasure of Venice.

Though both Laura and Paul are from Minneapolis, they met in Chicago at a party on Christmas Eve. Laura was an actress and Paul had gone to law school and was then working in real estate. Laura got her SAG card, and soon found herself couch surfing in Los Angeles. Paul followed her a year later, and they settled in the Marina. That didn't last long, as they knew Venice was where they wanted to be, and they bought a place on Clubhouse in Venice.

When Laura first came to the Boardwalk, she immediately thought, "This reminds me of the Minnesota State Fair ... except way more diverse." Well, you can't have the Fair without Tom Thumb Mini Donuts. Between Laura's running around for acting, and Paul's commuting to his real estate job, they soon both realized they wanted to walk to work, and they didn't really want to leave Venice most days. The donut dream persisted, but a health department thing ruled out a cart, so the idea was on the back burner (fryer). Until the day Paul was out for a walk and saw a space open on Westminster (where Lidia's Pupusas is now). Laura called up Tom Thumb Donuts, found out you could purchase the same machines as the State Fair, and they were soon open for business, frying up a ton of donuts for the masses on the Boardwalk.

Their love for Venice grew, and so did their business. Paul and Laura would walk their dog, a Scottie named Zelda (after Zelda Fitzgerald, "She was crazy and half of Venice is crazy, so it was perfect" - Paul), down Speedway, and she would always stop in front of where their shop now is and refuse to move, until they dragged her away. The space in the cool old building became available, and Zelda's Corner was born. As Paul says, "We like a Village lifestyle. We wanted to do something WE like, so we don't have to get in the car to go get it" ... about as Venice-centric of a business plan as you can get. Paul comes from a farming family of 14 kids, so he knew about making a whole bunch of sandwiches ... so that is what they decided to focus on, along with those ridiculously delicious hot little donuts. 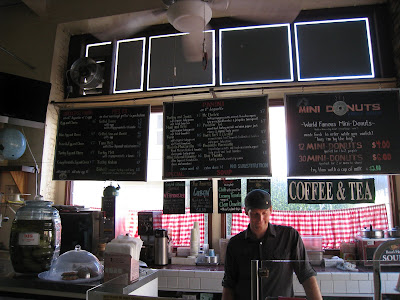 "We want to make sandwiches for people we like that they will enjoy", says Laura, and that's exactly what goes on every day except Wednesday, when they are closed to give themselves a mid-week break. Almost all their customers are regulars, who know that Paul is the sandwich stickler. It drives him nuts when people want to amend their special sandwiches ("A Cuban sandwich without pickles?! - I'm guilty and apologized to him), so he is most often found in the back of the place, making the sandwiches, and not mixing it up with the customers as much. Thus Laura "is the personality of the place", and both of them say that having their spot be a community center is the absolute joy that they get out of it. Sadly, Zelda the Scottie is no longer with us, but Ziggy the Scottie keeps it all real.

Paul is a jazz and blues fiend, so there is always good music playing and posters around from those genres. The front door is adorned with postcards from around the world that their loyal customers have sent them, perhaps missing their favorite sandwich when away from their corner. It's a close-knit corner too, as all the businesses in that little dead-end where Westminster meets the beach are friendly and look out for each other. They like to call it "Eat Street" since there are so many good dining options right there, from Zelda's to the Fruit Gallery and Groundworks on their side, and Sushi, Pizza, Tacos, Indian, and Sushi on the other. 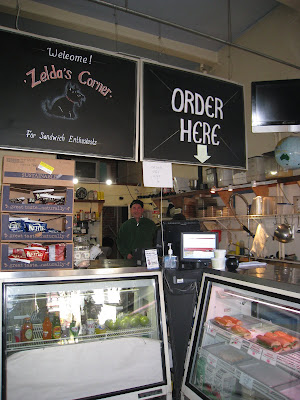 Laura told a great story about how the cops like to ticket there if you're unloading your restaurant stuff from your cars, and one day she got ticketed as she was hauling sodas into Zelda's. She kind of lost it as it was just one of those days, and soon Courtney (who now sells gems on the Boardwalk, but at the time worked at the coffee shop) got all the people around to chant, "Stop wasting time, Start fighting crime!!" in what now stands as one of their favorite Venice moments. That part of Westminster is a great snapshot of Venice as a whole, as many of the business owners are immigrants, and the whole atmosphere is as multi-ethnic as it gets. They see the neighborhood kids grow up, they dine at each others' homes, they bring one another back gifts from travels, and the people have mostly stayed the same down there over the years.

Laura and Paul don't much like to go East of Lincoln, so they stick to Venice spots when they're off duty. They're big on Hinano's, La Cabana, Wurstkuche (it's the VENICE side of Lincoln, so it's ok), James Beach and The Fruit Gallery. Solid choices all. They think the Boardwalk is seeing more musicians and artists these days, since it's not all just vendors of downtown junk anymore. As far as the gentrification debate/reality, Laura says, "I think it's always going to be Venice". From her lips to God's ears, for sure, but I'd have to agree. Especially when you get people like Laura and Paul who love it here as much as they do, and strive to preserve and celebrate all the things we hold dear about it. 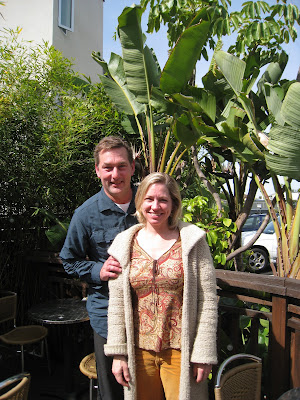 It's clear when you go in how very local a place it is. If you can't stroll down there, they'll deliver to you - via bicycle. I love to get the "Vermonster", the sandwich that I sometimes dream about (Turkey, Bacon, Vermont Cheddar, Granny Smith Apples - hold the Maple Mustard - Sorry, Svobodny!). The other day when I was in there, the nice guy working offered me a couple mini donuts as a snack while I waited for my sandwich to be pressed. I, of course, accepted his kind offer, and smiled to myself as I munched, that we have a little gem like this in our midst, and that the owners are both from where I'm from and now share the same big spot in our hearts for Venice. Home is where the heart is, after all, and there is a whole lotta heart in Zelda's Corner.

You too can be a regular at:

Fastest, easiest ordering is via their Facebook page, under Zelda's Corner!
Posted by CJ Gronner at 8:06 PM