Tom Freund - The Edge of Venice

Tom Freund has been a part of my Venice for as long as I can remember. His latest album, The Edge Of Venice, gave us a good excuse to sit down and talk about our Venice, and his music that is inspired by this special part of the world.

Tom was born and raised in New York, where he self-taught himself the upright bass and piano at the age of 7, then picked up the guitar at 11. He was already getting jazz gigs in high school, and so began a musician's life that has never included any kind of desk job. College was the Berklee School of Music and then Claremont College, when he decided to come West to check out the music scene. Once he got that degree in English Lit, it was off to the races, starting "the tour of life."

Tom was broken into the touring musician's life when he played as a member of alt-country band, The Silos. "It's a great way to see the world. When you play a show somewhere, you're in the scene you'd be in if you lived in that town, so you meet a lot of like people and the world gets smaller." After a stint living in Austin, Texas, Tom bought a big dresser at the French 50/60's store when he was visiting Venice, and decided it was easier to move himself than the dresser, and has lived here ever since. Though he travels the world playing gigs (and just got back from opening for Ben Harper in Europe), it's always Venice he looks forward to coming back home to.

Tom's daughter, Delilah, was born in Venice and through her, Tom has realized the phenomenal and tightly-knit community that Venice also is for parents and kids. He recorded a great kids album, Hug Trees, in honor of this, that every Venice kid (or every kid, period) should own. 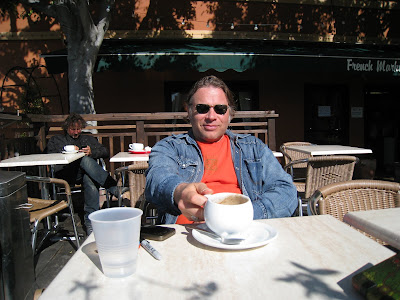 We sat down at The French Market to catch up and talk about this place we love and his latest album. We agreed that it's getting harder to live in Venice as an artist (though the artists made Venice what it is in the first place), and Tom said, "I'm hanging onto Lincoln for dear life." Hence his album title, the EDGE of Venice. But that title also has double meaning, as the EDGE that Venice has to it is also something worth clinging to. As it gets more homogenized around here, it's harder to see that edge, but it's there, and we're hanging onto it for dear life. Tom (and I) love the old school places, like the Abbot's Habit corner ("Legendary"), the French Market, Firefly, and The Roosterfish ("The dopest place left for a drink"), though Tom is not afraid to hit the Other Room for a Malbec on occasion. He misses The Stronghold music scene, which he was a big part of, and we're still trying to find the place that can be like that artistically, locally.

Perhaps it could be The Del Monte Speakeasy, where Tom had his cd release show for The Edge Of Venice the other night. Located in the basement of The Townhouse bar on Windward, the Del Monte is now open for business (stay tuned for the story on them soon) and hosted a slam-bang night of music to celebrate Freund's latest musical endeavor. The Del Monte really was a speakeasy in the Prohibition era, and is now completely refurbished and gorgeous, with great sound.

Australian indie darling Julia Stone opened the night up for Tom, in her first show without her brother, Angus. She has an angel voice, and can blast some great trumpet too. I loved her version of "You're The One That I Want" from Grease the most. Check her out. 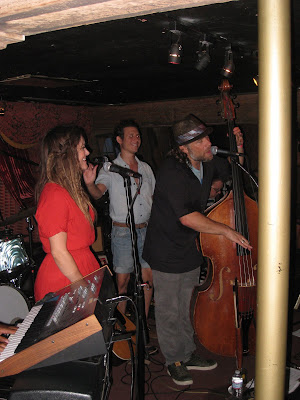 Tom's friend introduced him by saying, "In this sacred, crazy, fucked up, tilted place called Venice, we can all relate to Tom Freund!" I loved that. In a night that featured many of the songs off the new album, and a bunch of classic ones, each and every number was one that had the crowd dancing and singing along ... many of whom have been Freund Fans from the beginning. As Tom said before launching into his song "Where Is The Love?", "This whole night is about friends." So true. And many of Tom's musician friends were there to back him up: Chris Joyner, Gabriel Noel, Ben Peeler, Pete McNeil, David Ralicke, Brett Dennen, and Julia Stone back up there to duet with Tom on his great, "Why Wyoming?" and "Sugar Don't Get No Sweeter Than This" and the excellent covers of The Who's "Let My Love Open The Door" and the Beatles' "Revolution". Good times. 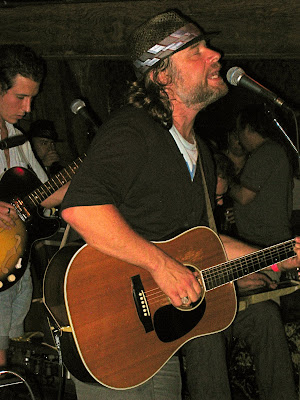 "Wounded Surfer Boy" off the new album sounds a whole lot like a bunch of Venice people I've known, with its verse that goes:

He's the Mayor of the neighborhood
He rides around on a skateboard made of wood
He's got no car, no house to call his own
But that's alright he'll find someplace to stay tonight
And that's alright by her

Yep. "You've heard this one before in Venice," said Tom to introduce one of my favorites, "Truly Mellow". It features a chorus of "La da dah's" that the whole room sang along, especially when Tom said, "C'mon Venice, sing so they can hear about it in Marina del Rey!" And we did. 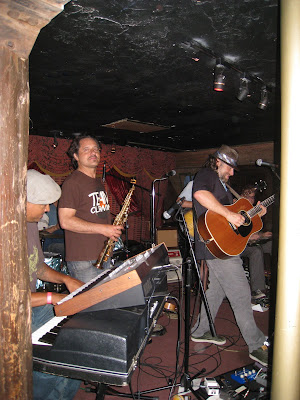 At night's end, everyone staggered back upstairs to cool off outside on Windward. Sweaty, smiling, happy and feeling truly mellow. A perfect night in and about Venice, California.

Add Tom Freund's The Edge Of Venice to your Venice Soundtrack ... It's not complete without it. It and all of Tom's discography are available at TomFreund.com, ITunes, CD Baby, Amazon, and at whatever record stores are still alive and kicking.