Carole Primerano-Pringle is one of the dearest people in Venice to me. I see her each morning (that she works ... days off she wants to see no one!) at The French Market, where she runs the place like the tight ship that it is. Getting your morning coffee and shooting the breeze for a bit each day doesn't let you know what's really going on with people, however, so we sat down the other day to chat, WITH her husband, Richard Pringle, whom I finally got to meet! 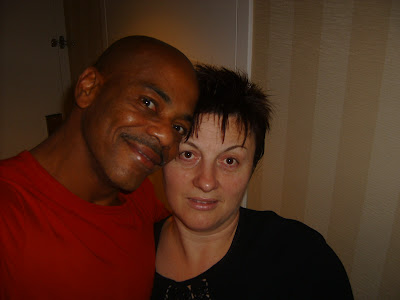 Theirs is one of those great stories of "I just knew". Carole had been friends in her native Corsica with Lionel, who used to co-own The French. He urged her to come over, to work for him, though she says that if The French hadn't been near the beach, she would never have come. (You see? We could be friends on that right there alone.)

Carole began to work at The French in 2002, the day after she arrived in the U.S., and we've been solid ever since. Shortly thereafter, with no real grasp of English yet, Carole was sitting in the sun with her book on a bench near Muscle Beach. She laid her eyes on this guy walking nearby, and said to herself, "This is my husband." She. Just. Knew. Lacking words, she had Agnes (current French owner) write on a business card for her that she'd like to know him and her number. She had seen what car he had come from, went over to it, saw the window cracked, and dropped the card inside. Now that could have been that, and usually would be, but Richard (a native Angeleno) was brave and intrigued and called. They went out to dinner a few days later, hit it off, and were married four months later!

As they near their 10 year anniversary, Carole and Richard still act like newlyweds, darling together. They also work together, as they've started a new business called Take-Out Connect. They work with local restaurants to organize and promote their online ordering process. They are currently focused on Venice dining spots, as this is where they live and are a big part of the community.

As Richard said, "We're a hybrid company." Basically, they connect restaurants with more customers by marketing directly to the people nearby. They offer special promotions through the participating restaurant's site. They make it all more efficient and cost effective for the owners. They track orders, so they know what is popular among customers, allowing restaurants to better prepare their own ordering. As orders come directly in via the internet, it makes it all way easier for the kitchens, not to mention for Carole (The French Market was TOC's first client), who says, "I do nothing. I don't talk to people. We waste no time. There are no mistakes." So there.

Business grows for everyone involved, and Take-Out Connect makes it all seamless. I've used it as a customer of The French, and I've seen it used by being friends with the owners, and would strongly recommend (and do) it as a powerful business tool for any of my other restaurateur homies in the area to blow up their take-out side of things - the largest growing segment of the dining out pie, according to Richard.

The Pringles work a lot, but when they're not, they rarely like to leave Venice - unless it's for tennis, which they both love. The beach (where they met) is their favorite thing about it here, of course, along with the bohemian atmosphere we all try to preserve and celebrate. They can also be seen on the French circuit, especially at Lilly's. Carole is also partial to Cafe 50's, and just typing that made me want to go there right now.

I love it when people find each other. I love it when they find a place, a HOME they both love. I love it even more when they commit, not just to each other and their home, but to the community surrounding them. That Carole and Richard want their business to be of and about Venice speaks a lot to who they are. And who they are is Fantastique!