I can't believe I have to write this, but the beloved Green House Smoke Shop on Abbot Kinney Boulevard in Venice, California is gone. GONE. Yep. Another victim of gentrification, the long standing purveyor of all smoking needs and community catch ups has shut its doors, leaving a massive hole in the hearts of so many old school Venetians. The landlord decided to cash in on their building, gave them a 60 day notice, and Green House owners Bunny Lua and Sandor Caplan found themselves having to pack up everything in order to close up shop on what has been nearly their entire existence the past two decades. The Green House was one of the last cool Mom and Pop shops on the boulevard, and now it's pretty much down to Abbot's Pizza, The Brig, and Burro. It's so sad, it really does feel like yet another death in the Venice family. 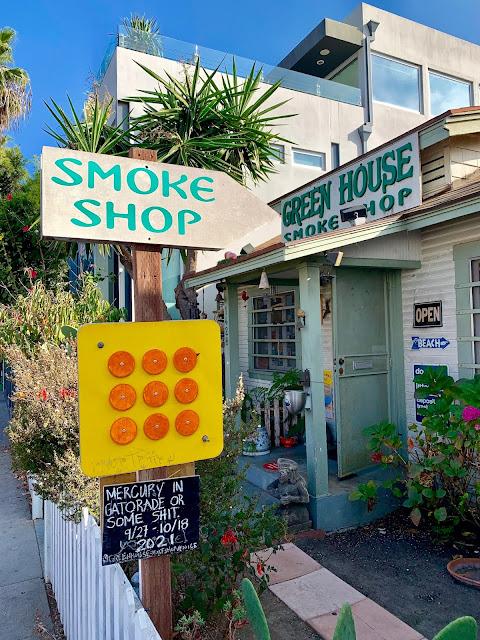 I've written about the Green House in the past, but I would never be prepared to write about it not being there.  I wrote about Bunny in the past for Women's Day in Venice, too, but when I talked to her about her shop closing, we were both real emotional about it - for good reason. The Green House was not just a store, but a hub of the community, where you might not need anything to smoke that day, but you would stop in anyway, to catch up with your friends and hear about what was the latest in the neighborhood. I have spent hours on the couch behind the counter talking with Bunny, and saw first hand just how much this place meant to so many. 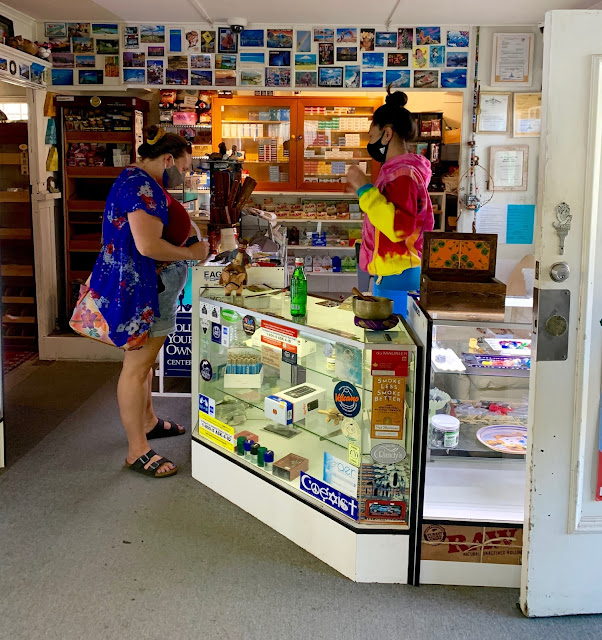 Having survived the worst part of the Covid pandemic (so far), even though they were considered "non-essential" (and many would argue with that distinction), it was an especially hard gut-punch to be told that they had to clear out 20 years of Smoke Shop history, all while having no idea of what they were to do next. The Green House is quintessentially Venice, so relocating is a challenge ... plus they need time to grieve what was a true and deep loss in this community.

As they had to be out pretty quickly, the Green House closed up shop without much fanfare. Longtime customers had no idea - and might still not know - that their go-to on Abbot Kinney was now gone. Empty. The stories and memories of a crucial Venice generation are now just that. Memories. Great ones.

Bunny, Sandor, and their son, Leaf, as well as their extended family members are so dear to me, I have always considered them my Venice Ohana. The first memory I have of Leaf is of him banging on a conga drum at out annual 4/20 Sponto Croquet Tournament when he was just a little toddler. I painted his face with little leaves, and adored him ever since. Leaf would have little sales of his toys (I still have a Smurf!) on the sidewalk in front of the shop, and then when he got bigger (a LOT bigger, he's way taller than me now), he would practice his basketball moves on a hoop Sandor installed in front. Everyone on the block knew and loved Leaf, and he truly grew up inside that little shop. 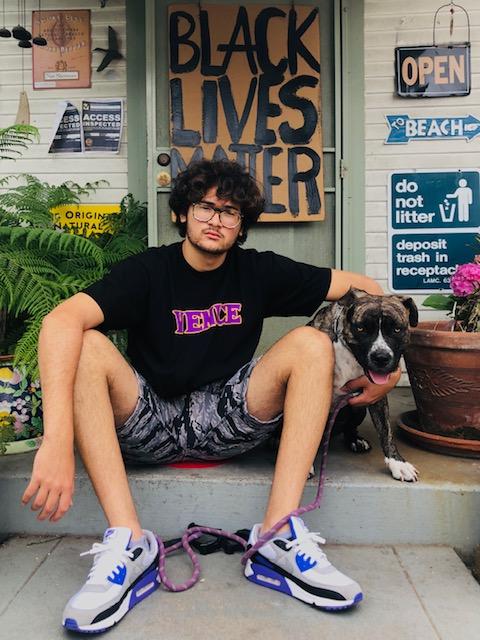 Bunny's dad tended to a slew of plants and succulents in the yard of the shop, and that was one of the saddest things to me ... seeing them all cleared out and gone. So much vibrancy, so much life, so many good vibes ... all just gone. For what? Caplan told me so many locals had told him over the years that if it wasn't for the Green House, they would never go to the Abbot Kinney anymore. When you take all the character out of a place, what's the point of going there? Everywhere has mall shops. And we don't like malls. 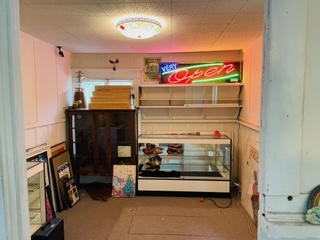 They chose Abbot Kinney for their shop because the rent was cheap (!), as the block was as ghost town in those days - I honestly can recall a tumbleweed blowing down the road! Abbot Kinney (Formerly West Washington!) ran through the heart of town, was a main street for locals, and far enough away from the Boardwalk that they catered more to people who lived here than to the tourist crowd. Oh, how things very quickly changed. Green House never advertised - they didn't have to. It was all friends and word of mouth customers who quickly became friends. "To many, the shop stood as the last beacon of the true Venice, the Venice they remembered and fell in love with when they first arrived, and the Shop was locked in that time. It was so familiar, it made you feel at home - always the same, but a little different - when you came back years later," explained Caplan in what I think is a perfect summation of why the Green House was so special to so many. It encapsulated a moment in time in Venice ... a time that I think most will agree was way better.

The main thing both Lua and Caplan wanted to express was their deep gratitude for all the wonderful years of business, and all their friendships that were made. In the shop's last days, those who knew they were closing came in to thank THEM - showing just how crucial they were to so many's Venice experience. Those customers taught them things, and vice-versa. They supported the Green House, and in turn, the Green House supported so many Venice entities, from the Abbot Kinney Festival to getting new trashcans put in on the boulevard, to sometimes just listening to a friend cry on their shoulders (me). It doesn't even seem real to me that the next time I stroll down Abbot Kinney, I won't be able to pop into the Green House to see my dear, dear friends. And that SUCKS. 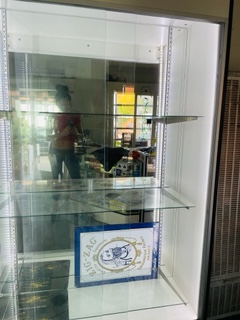 We all know things change and blah blah, but this one is real tough to swallow. Things are still a bit up in the air as this is all pretty new, but Lua has a CBD business she's getting off the ground called Vertbiotic, which you can follow on Instagram until there is a proper launch. (You can also keep in touch with the Green House family on Instagram. If you have any smoke needs or just want to know what they're up to, or would like to offer them your own thanks, you can DM them at Greenhousesmokeshopvenice on IG, or at Facebook.com/GreenHouseVenice) I know that Vertbiotic will be a great business endeavor for Bunny, but still ... it sure won't be the same as dropping in to the good old Green House to catch on up with the news of the day. Those days are now gone. 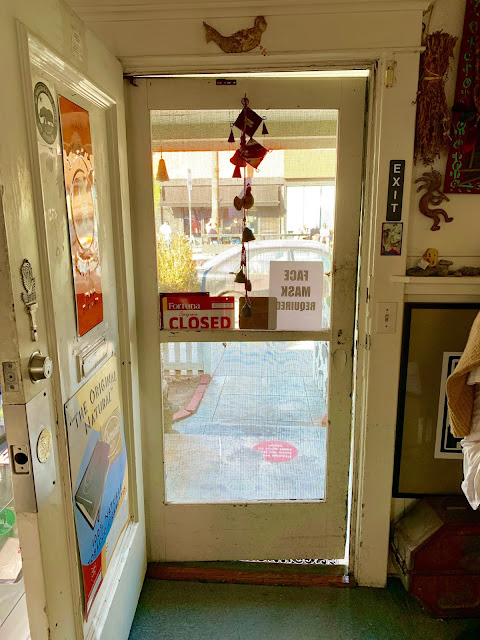 I'd like to offer my own deep thanks and gratitude to Bunny, Sandor, and Leaf. For the visits, the support, the pipes, the news, the laughs, the copies of Vice I would pick up there, the hugs ... but most importantly, for the years of friendship and memories that will be guaranteed to bring a smile to my face for the rest of my life. THANK YOU, FRIENDS! And Cheers to you for creating something special that will live on in the hearts of all the Venice locals who loved you for so long. WE LOVED YOU, GREEN HOUSE SMOKE SHOP! ALWAYS.